“I think if one combines it with fresh ingredients, or with a nice presentation on lovely plates, it could even be hard to tell the difference,” curator Tim Goossens commented on the frozen delights of Babeth’s a few days later. He was seated next to the eccentrically fabulous Athena Reich, a New York comic actress, musician, and Lady Gaga impersonator, who’s been gaining legitimate attention for her New York performance show, Art Birth.

“Who knew that Lady Gaga was from Toronto,” he cracked, refilling a hefty Bombay Sapphire libation. The following week, Mr. Goossens was set to open a new art fair, Select, in Miami. “The booze makes the parties even more fun, but makes looking good for the next party so much more of a challenge,” he said.

“Rashaad bailed,” art publicist April Hunt, sighed as she blew in the door a solid hour late with an unfamiliar replacement. Rashaad Newsome was set to unveil a new art performance with Mikki Blanko at Select and Ms. Hunt was in charge of creating chatter. She took a seat near Carrie Crecca, public relations director for ETRO, and Julie Ly, who manages PR for Kate Spade & Company. All were Florida bound.

“Usher will be at their party,” we over heard one of them say.

“I’m also going to Art Basel,” Ms. Crecca chimed in to the group. Julia Ragolia, across the table, was remarkably tightlipped on details about her soon-be launched glossy magazine for contemporary culture, art, entertainment, and men’s style, At Large. Although one loudmouth confessed that A$AP Rocky was to perform at the tome’s Miami launch at coveted boutique The Webster.

Art Basel kicked off with all the usual players in all the usual places. Drugs were front and center, as partying powered up to heady levels among the movers and shakers. Each year, the wattage seems to have increased, but unlike Vegas, Basel rules are different. Everyone does everything in front of everyone else, then puts it on Instagram.

“Want a bump?” a raver asked around 3:30 a.m., during David Guetta’s massive set at LIV in the Fontainebleau, where Miley Cyrus, Patrick Schwarzenegger and Paris and Nicky Hilton guzzled down bottles of top-shelf booze behind a barricade of security details.

Throughout the long weekend, under the Southern sun and stars, Shindigger witnessed all kinds of debauchery, from a relatively well-known actress popping Vicodin at Le Baron to the more hardcore use of ecstasy and cocaine at Space Miami, a weekend hotspot. The club hosted electronic dance music DJ Paul van Dyk, just shy of releasing his new album, The Politics of Dancing 3. The six-hour set went well past 8 a.m., so it’s kind of understandable that extra help was needed by some partiers to stay awake.

It was, however, Dom Pérignon’s fête at the W Hotel, “Metamorphosis,” co-hosted by Alex Dellal, Stavros Niarchos and Vito Schnabel, that reigned supreme.

“This is a mad house, per usual!” someone barked to a poor publicist unable to accommodate the rabid hoi polloi selling anything but sex to get in at the door. Those that did make it into the coveted party spot were rewarded with ample coups de Champagne.

Also at the W Hotel in South Beach, at IWC Schaffhausen’s lavish ‘’Timeless Portofino’’ gala, the problem appeared to be drunkenness, one attendee reported in confidence. While the event’s luminaries Emily Blunt and James Marsden said they had both enjoyed the dinner, on the flipside, a certain fashion purveyor got blackout drunk and was gently escorted back to her hotel room well before midnight.

“The celebs don’t buy seriously—it’s all show,” harrumphed one prominent West Chelsea gallerist who asked not to be quoted by name. “But we did exceedingly well with our VIP, wealthy client sales. Yes, a tiny few actors purchased works, but of course we don’t disclose who or details.”

“The art is always a thrill,” his wife, Hilary Geary Ross, added.

Philip Levine, mayor of Miami Beach, congratulated everyone as he sauntered by with his litter at a closing Hennessy event for the Select fair.

“And no complaints from neighbors about the noise?” he was asked. 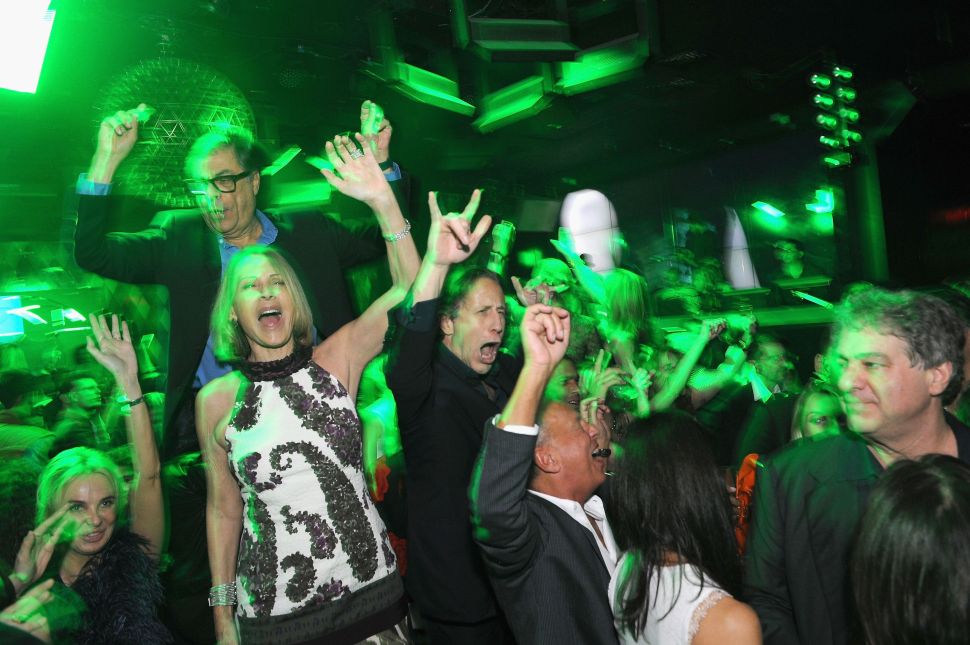