In Miami, this last week, a giant modified bouncy castle popped up on the beach; on the side of it, in a cartoon bubble, was the giant word “Truth.” Soon, a very long line of people snaked out of the contraption. Some couples or groups of friends argued outside about whether to join in. (Even from a distance, you could see some people shaking their heads emphatically “no.”)

The bubble’s interior acts much like a photo booth, but serves to compile two-minute long video responses from the public. Once seated inside, people are invited to record their opinions and thoughts as they finish the statement: “The truth is…”.

A New York-based artist who’s well known for his photography, Hank Willis Thomas was selected for “Fieldwork,” the Public Art exhibition at Art Basel Miami Beach, by curator Nicholas Baume. His In Search of the Truth (Truth Booth) project literally requires Mr. Thomas and his collaborators to go out into the field to gather research. (The work was created by Cause Collective artists Mr. Thomas, Ryan Alexiev, and Jim Ricks and is presented in Miami by New York’s Jack Shainman Gallery and Goodman Gallery from South Africa.)

The Observer met with Mr.Thomas at Collins Park to hear more about the truth.

Was this project created for Miami?

It was first shown at the Galway Arts Festival in Ireland in 2011 and has since traveled to Afghanistan, the Cleveland Museum of Art, Burning Man, and South Africa. We’ve recorded almost 5,000 people in the booth.

How does it work?

It’s a video recording. We created an interface that asks you what the truth is and you look in the camera, press record, and finish the statement. We actually have to process the videos and upload them to our website. This is a completely artist-funded project. It’s a collaboration between the people that participate and us as artists, who are facilitating a means for their truths to be shared with the rest of the world.

Are there any particular statements on truth that you recall?

Yes, one of my favorites is a little kid who says, “The truth—I believe—is Legos. Legos are very small but they allow you to think big!” It shows that the tiniest things are the building blocks for everything.

What are some of the realms of thought that people have covered?

It’s a broad range. People have talked about failed relationships, about love, and family. They’ve talked about the notion of the truth, about dishonesty, about what’s happening to them right now, politics. The truth is ageless and timeless. The youngest participant is three years old and the oldest ones are probably in their 80s. They’re speaking about the same thing from their perspective and no one can take that away from them. That’s what I like about it. You’re right no matter what you say, if you tell the truth.

What’s your fascination with the truth?

Within my own work—my solo practice—I’m obsessed with different variations of the truth. I like thinking about history from various perspectives. I’m interested in how the perception of what’s real can be different depending on where you’re standing.

How do you hope this project will impact the world?

A new term that’s entered our vocabulary over the past 10 years is “crowdsourcing.” We’re crowdsourcing a research project about the truth. The real impetus of the project is to find out how we as a community can accept that even though other people’s truths are different from ours, they are still valuable. 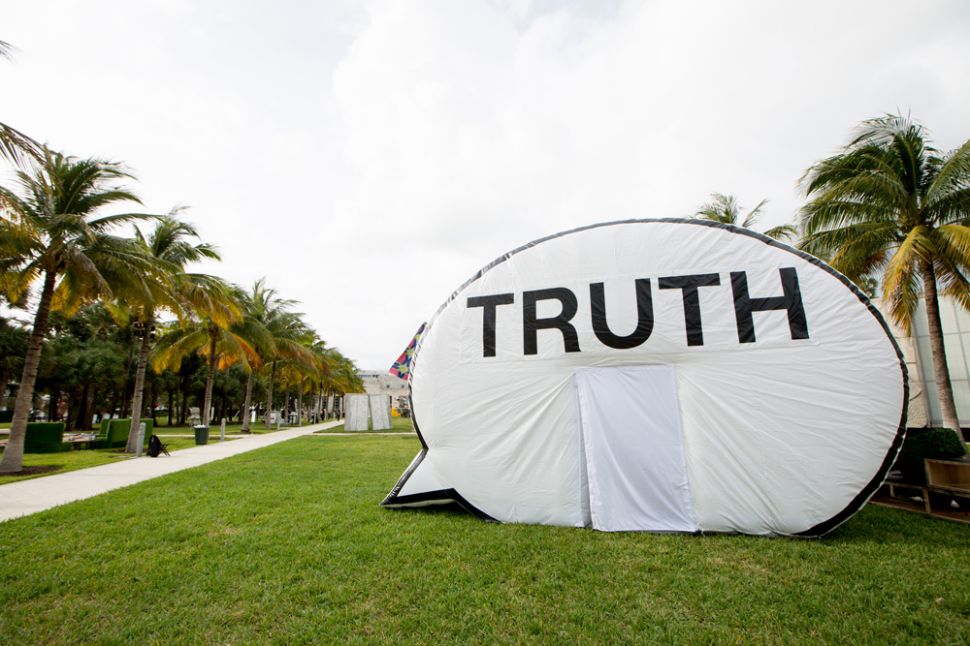