Refulgent was the moon and a day off full when I visited chef Galen Zamarra’s West Village restaurant, Almanac, whose name refers to the antiquated farming bible that publishes the lunar cycles. The temperature danced just above freezing that night, and so it was a shitty cold rain that fell, slicking Seventh Avenue and turning a city already on edge even slipperier. The moon shone but its brilliance and clarity were hidden beyond a ceiling of rain clouds, purple in the city night. Were these ill omens?

Almanac occupies the same awkward bi-level space, of which Mr. Zamarra is the owner, Mas (La Grillade) did until it closed last August. Though the restaurant was well received by critics, it never really caught on. Grilling couldn’t escape the prosaic taint of backyard barbecues, and Mr. Zamarra’s pricey offerings just didn’t move as well as they should have. So Mr. Zamarra, who as a young chef cut his teeth in the kitchen of David Bouley, reconfigured the concept as Almanac, a very Bouley-ian approach to French-tinged American fine dining.

There are three tasting menus offered at Almanac, a three-course ($75), a five-course ($95) and, for those who ain’t got shit to do, an eight-course ($145). But, as the menu also informs, “All dishes can be ordered individually as an appetizer for $20 or as an entree for $40.” Each course is named according to what seems to be its main ingredient, under which the other components are listed. “LOBSTER,” for instance, the second course of the five-course menu, includes “lobster carrot consommé, herb ravioli, hon shimeji.” Sometimes the ingredient is more abstract. “ROOTS,” one of chef Jana Kern-Mireles’ stellar desserts, showcases a variety of tuber-like components such as ginger (in cake form), sweet potato (as an ice cream) and pecan (an outlier).

In general, the menu is confusing and inconsistent. One must order horizontally from the three-course, in which case one chooses from three options for each course, while the five- and eight-course menus offer no options other than those listed.

It might seem unfair to Mr. Zamarra’s cooking to focus so much on the menu, but menus are funny, trenchant things. Though no diner goes to a restaurant for its menu, just as no one goes to J. Crew just to pick up the catalog, they are nevertheless rife with information.

As the Stanford linguist Dan Jurafsky demonstrates in his spectacular new book, The Language of Food, a menu isn’t merely a flat order form. It offers a thousand cues to the make and mettle of a restaurant.

At Almanac, the confusion of the menu illustrates an inherent existential confusion in the restaurant as a whole and in many dishes in particular. I just don’t see a cohesive idea to the place. In its absence, Mr. Zamarra and his team have added a bunch of bells and whistles to obscure that essential lack. Or maybe had the restaurant had a strong concept behind it, all these elements—the name, the lunar phases, the byzantine ordering, the gimmick-y menu listings—would feel animated by something other than the need to fill up space.

Micro-seasons, nominally the raison d’être of Almanac, are largely a fictive concept in New York City. Especially now, during the winter, when, if we really wanted to eat local and micro-seasonally, we’d be battered by all-turnip tasting menus. Not that eating at Almanac is at all an unpleasant experience. The space, though weird, is cozy. Amid constant reports of fine dining’s demise, it’s comforting that the tables are covered in white linen with fancy little slate silverware rests. Plus, Mr. Zamarra is a master riffer, using and re-using a single ingredient like an onion was a Rubik’s cube or a lemon an anagram for melon.

The second of the eight-course tasting menu are three roasted Island Creek oysters, served over buttery leek hearts with a dash of what Mr. Zamarra calls a pear and parsnip soup. (On the menu it’s called a foam.) The flavors burst and float down slowly. Mellow, plump oysters amble along with the sweetness of the pear and the texture of the parsnip. It’s like a Calder mobile of flavors.

Even better is the “PINE” course, a salad of celery root with a pine vinaigrette, sliced Matsutake mushrooms (also called pine mushrooms), toasted pine nuts and pine shoot aioli in which ground young pine needles are scattered like fine herbs. (The only thing missing was Chris Pine.) The pine flavors hit you serially—with the oils from the young needles taking awhile to assert themselves but doing so with great confidence and charm. To me that’s the best dish on the menu, though it has issues. Those mushrooms, for instance, are from Oregon, which, if your whole thing is about eating micro-seasonally, seems disingenuous. And though I didn’t realize it at the time, the thin discs of celery root, what Mr. Zamarra calls carpaccio beneath the greens, would become a go-to cliché manifested in a handful of other dishes as well. (Oh look, it’s sunchoke carpaccio beneath the sunchoke salad too!)

It’s a shame other better dishes aren’t on the menu. In his zest for riffing, Mr. Zamarra fucks a squash six ways to Sunday. Some of the ways work—a mound of buttery nutty butternut risotto—but underneath that lurks a clumsy ring of poached delicata squash that adds nothing but itself to the dish.

Errant squash beneath the noble, clear moon beyond the clouds gives the feeling that there is something appealing about Almanac. For those with as much money as the day is long, it is indeed a pleasant way to pass an evening. But in an age of ideas, of restaurants with discrete and well-thought-out points of view, Almanac feels a little light. It uses a lot of words—a lot of long ones—but doesn’t say much of substance. Instead it leaves you tottering out, food coma’d and broke, on a cloudy night, jonesing for a starry sky and the clarity of a full moon. 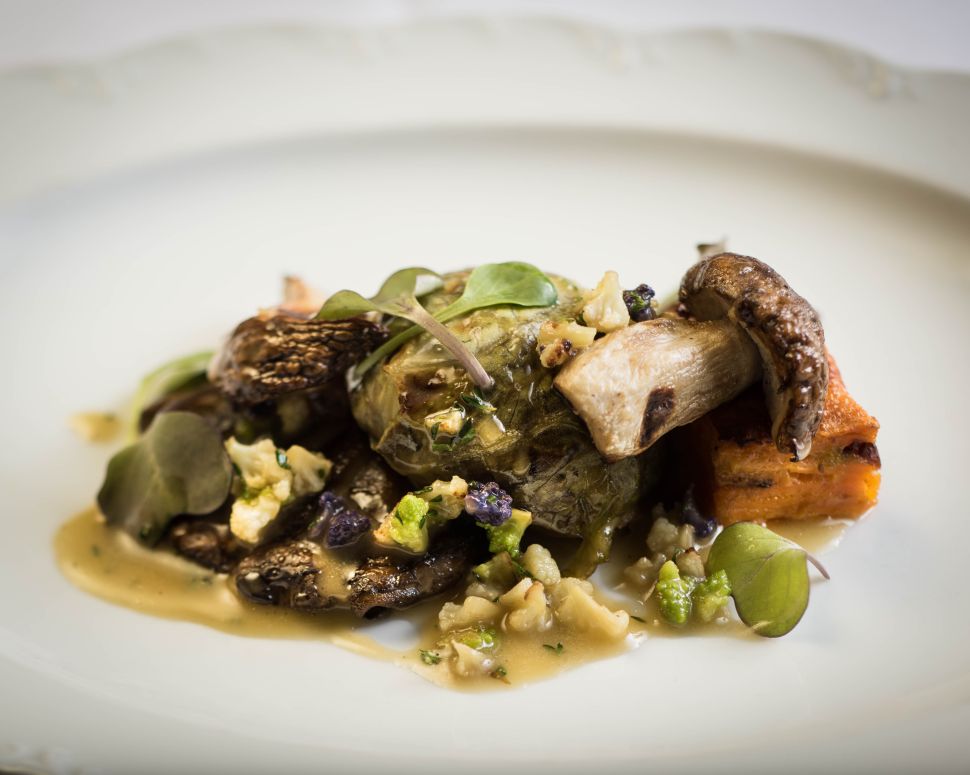