After a police union leader ripped Mayor Bill de Blasio for telling reporters last night that he worries about whether his biracial teenage son is safe from police, the mayor defended his remarks today, contending that he was just explaining a sobering reality for many New Yorkers.

“I don’t think denying that reality is going to move us forward. What we’re trying to create is a dynamic where every young person of color understands that a police officer is there to protect them and they feel respected,” Mr. de Blasio told reporters at a police-related press conference in Queens. “We’re not there yet.”

Patrick Lynch, the president of the Patrolmen’s Benevolent Association, blasted Mr. de Blasio for comments he made after a Staten Island grand jury decided not to indict a police officer in the death of Eric Garner, a black Staten Islander. Mr. de Blasio said he had to “worry over the years” and asked himself: “Is Dante safe each night?”

“And not just from some of the painful realities of crime and violence in some of our neighborhoods but safe from the very people they want to have faith in as their protectors,” the mayor said.

Mr. Lynch, a frequent critic of Mr. de Blasio, said in a press conference today that the Democratic mayor once more threw cops “under the bus.”

Mr. de Blasio, in response, implied that police officers do not always agree with Mr. Lynch, taking a subtle swipe at the union leader. The mayor and the cop union heads have been at odds as they try to negotiate a new contracts for NYPD officers and Mr. de Blasio tries to reform the department.

“There’s always a difference between the people who do the work and the unions that represent them and the union leaders that represent them,” Mr. de Blasio said. “I think the rank-and-file, hard-working members of this department understand this strategy because they’ve been implementing it with extraordinary effect,” he added, referring to the NYPD’s handling of recent protests.

Mr. de Blasio said New Yorkers should be respectful of police and follow their instructions, but also argued this was different than understanding that some people fear the police.

“I do want to emphasize, there’s a difference between saying we should respect our officers, which of course we should …versus the reality that so many parents have felt that unfortunately their child might confront unfair treatment, unequal treatment,” he said, invoking the police killing of 12-year-old Tamir Rice in Cleveland.

He added, “That’s a very different point. Those instructions are given both out of the hope that things would be fair in our society and the hope that we could all be treated the way we are supposed to but the fear that it might not happen for their child and the consequences could be deadly.” 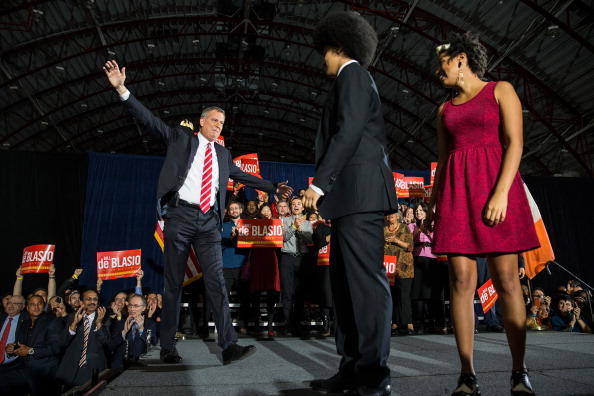