The officers, Wenjian Liu and Rafael Ramos, were shot and killed in their patrol car on December 20, setting off a new round of bitter conflict between City Hall and police unions.

“Our fallen heroes will never be forgotten. Their memory lives on in their families, and in the NYPD family,” Mr. de Blasio said in a statement. “And now it will live on in the streets of the communities these brave men lived in and protected. This is an expression of our pride in each of these men, and our sadness at their loss.”

Legislation will be introduced co-naming Ridgewood Avenue, between Shepherd Avenue and Highland Place in Brooklyn, “Detective Rafael Ramos Way.” West 6th Street, between Avenue S and Avenue T in Brooklyn, will be co-named “Detective Wenjian Liu Way.” The blocks are the sites of the detectives’–they were posthumously promoted– respective homes, and were selected in consultation with their families, Mr. de Blasio’s office said.

Police unions and conservative critics of Mr. de Blasio blamed the liberal mayor for creating an anti-police environment that led Ismaaiyl Brinsley, 28, to assassinate the two officers in their car while they were on patrol in Bedford-Stuyvesant, Brooklyn. Brinsley, who had also shot an ex-girlfriend and written anti-police screeds online, committed suicide shortly after killing Ramos and Liu.

Mr. de Blasio had expressed sympathy for the protests that filled city streets and highways after a Staten Island grand jury failed to indict a white police officer in the death of Eric Garner, a black man. Police unions have bristled at the way Mr. de Blasio has attempted to reform the department and spoke about how he had to prepare his biracial son to interact with the NYPD.

At the funeral for Ramos on Saturday, some officers turned their backs to Mr. de Blasio for the second time. The first time was when he visited the families of the two slain men at a Brooklyn hospital a week earlier. 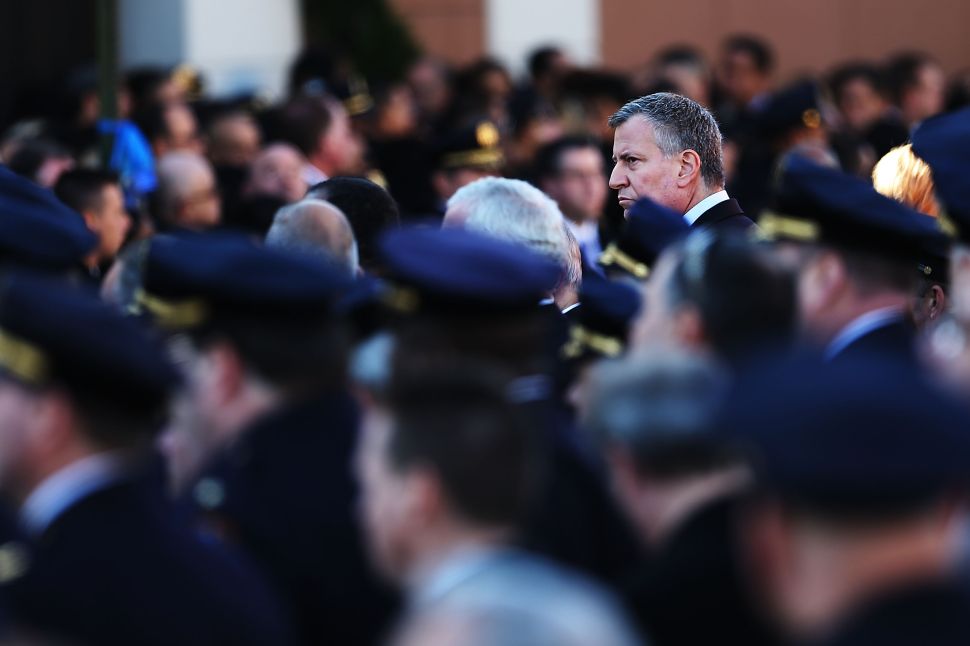