Mayor Bill de Blasio said today a Baruch College professor who was charged in connection with the assault of two cops should be fired—if he is found guilty.

The English professor, 29-year-old Eric Linsker, joined a large anti-police brutality protest Saturday night on the Brooklyn Bridge. He was charged with assault in the second degree, rioting in the first degree, criminal possession of a weapon, resisting arrest and unlawful possession of marijuana.

“Absolutely, he should be removed from his position [if found guilty],” Mr. de Blasio told reporters at an unrelated press conference in Brooklyn.

Mr. de Blasio also said the professor should be suspended in the meantime.

“I think an attack on a police officer goes against the grain of our civilization and our society, I think it’s absolutely unacceptable,” he said.

During the protest, Mr. Linsker allegedly tried to throw a metal garbage can at officers on the Brooklyn Bridge, where thousands had gathered to protest grand jury votes not to indict white police officers in the deaths of black men in Ferguson, Mo. and Staten Island. The police reportedly attempted to arrest Mr. Linsker, but protesters intervened, pulling him away from police and punching and kicking the cops in the face and head. Protesters knocked the two officers down to the ground and punched and kicked them, drawing condemnation from Mr. de Blasio today.

But police union heads, often at odds with Mr. de Blasio, criticized the Democratic mayor for releasing a statement Saturday which said the assaults “allegedly” took place, as opposed to declaring outright they had occurred.

“What happened Saturday night on the Brooklyn Bridge was fundamentally unacceptable. Of course, there will always be due process, so events are alleged until we have all the facts of what we believe we know, is that individuals attacked police officers, in an entirely inappropriate and unacceptable way, and that won’t be tolerated, it’s as simple as that,” Mr. de Blasio said.

Since a Staten Island grand jury failed to indict a white police officer in the death of Eric Garner, a black man, several mass marches have taken place in the city, snarling traffic on highways and bridges. Though Mr. de Blasio, unlike other elected officials, did not directly criticize the grand jury decision, he has expressed sympathy for the protesters and their aim to change how law enforcement interacts with communities of color. 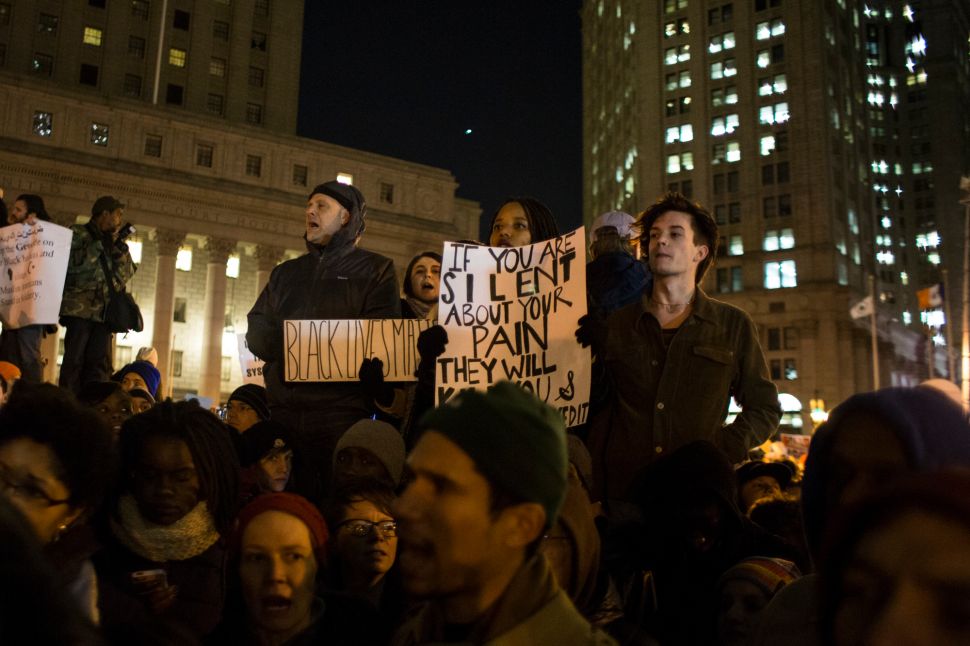