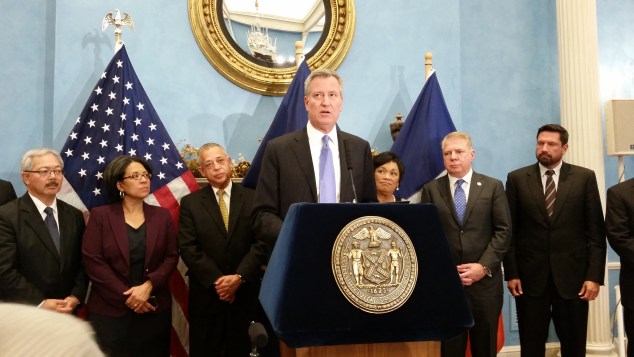 Mayor Bill de Blasio will rally a coalition of mayors nationwide to fight for immigration reform in Washington, bringing the Democratic leaders to Capitol Hill this February.

Mr. de Blasio, speaking with a handful of mayors at his back following an immigration summit at Gracie Mansion today, said he would lead a “coalition of the willing” to support President Barack Obama’s immigration executive order and try to sway lawmakers, many of them Republicans, to support more comprehensive immigration reform like a pathway to citizenship for the undocumented.

“We believe the voices of mayors have really not been heard in this immigration debate,” Mr. de Blasio said. America’s leaders of municipalities, the mayor claimed, represent a “sleeping giant.”

“America’s mayors, representing tens of millions of people who are very involved together in common cause–I think that is going to add momentum to this discussion,” he added.

Mr. de Blasio’s summit brought together the mayors of 25 cities like Atlanta, San Franciso, Seattle and Hartford to discuss how best to implement Mr. Obama’s immigration executive action to shield as many as five million undocumented immigrants from deportation. Mr. Obama implemented the executive order over the anger of many conservatives, who saw the action as a blatantly political overreach of the executive branch’s constitutional authority.

In addition to a “day of action” in January and a Washington lobbying day in February, Mr. de Blasio said he would be uniting the mayors–executives from major cities like Los Angeles, Chicago and Boston were not present today–to launch a “mayoral war room” on immigration reform, safeguard immigrants from fraudulent services and spearhead grassroots campaigns to educate people about Mr. Obama’s order and push back on criticism from the right. Before Mr. Obama signed his order last month, the mayor had already implemented a policy to stop New York from cooperating with U.S. Immigration and Customs Enforcement detainers.

Mr. de Blasio, a liberal Democrat, said he had reached out to Republican mayors about joining his effort, but explained it would include only those most committed to the immigration reform cause. The mayors were singled out, Mr. de Blasio said, because their cities have high immigrant populations like New York.

“We reached out to some Republicans mayors who fit the criteria of this particular gathering of cities that have very substantial immigrant populations,” Mr. de Blasio said. “To borrow a phrase from the past, this will be a coalition of the willing. This will be people who want to support the president on the executive action and want to build a pathway to a comprehensive immigration reform package by the Congress.”

Kasim Reed, the mayor of Atlanta, said the mayors learned about setting up offices of immigrant affairs, went over the detail of the executive action with Homeland Security Secretary Jeh Johnson and shared ideas about how to implement immigrant-related policies like municipal identification cards, which are coming to New York next year.

“We came here today to act, to be decisive and to hear from our colleagues who are literally on the frontlines regarding the immigration challenge,” Mr. Reed said.

“Folks on the other side of this issue have been very loud and very forceful in voicing their disagreement with the president’s order. And we think, candidly, there needs to be somebody on the other side who is standing up for folks and having a substantive conversation about how we can actually move this dialogue along,” he added. 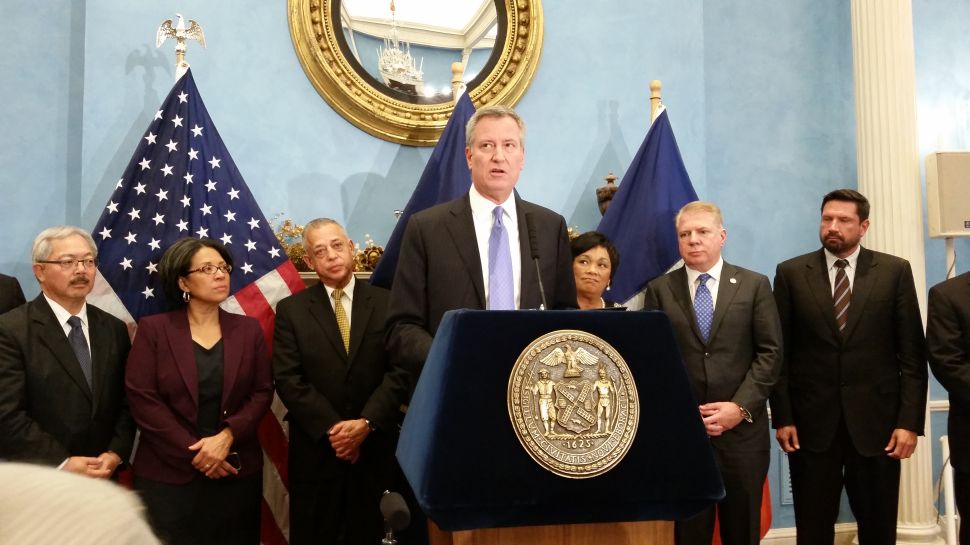