The term bluestocking, once an 18th century diatribe used to describe women of a scholarly inclination, and, in more recent times, a certain brand of well-read, hip millennial, also refers to a small book shop on Manhattan’s Lower East Side (blue socks and female gender not required). Bluestockings, its sign partially obscured by a tree, houses a few tables, an all vegan Fair Trade café and a selection of books alluding to its namesake: “Violence Against Women,” “Radical Pedagogy,” and “Lesbian Erotica,” to name a few. It’s a mission focused organization, aiming to challenge ideas, but they also sell alternative menstrual products to reduce waste, zines filled with new perspectives, and crafts from local artists.

Managed by a collective rather than a single defined founder or leader, the store is comprised of a small group of volunteers which oversee the operation of the store. One such member is Sarah Olle, who, on a recent Thursday afternoon, happened to be onsite answering emails from the store’s computer while another member, a transgender woman, worked behind the counter serving East Village locals. A New York transplant, Ms. Olle came to the bookstore shortly after graduating from McGill University in 2009, seeking people with circumstances and views like her own. She began volunteering at the bookstore and is now a member of the collective which runs it. Bluestockings, she said, “Is a space for people who don’t feel comfortable or safe in a lot of spaces outside the store. They can find solace here.”

The store functions democratically, and each member has a special project they are responsible for. Ms. Olle handles the accounting and volunteer coordinating, working to organize the next two tiers of volunteers, the staffers, and the volunteers, who both have a shift per week and their own responsibilities. Despite this layered structure, Ms. Olle says that the store “operates non-hierarchically, so nobody is the boss of anybody else.”

Running on a break even model, supported by donations and sales, the store has been operated by volunteers since its opening in 1999. The structure became more sophisticated after it nearly closed in 2003, and was purchased and reorganized by activist Brooke Lehman in order to continue operating–the updated store received an updated list of supported ideologies.

“We support feminism, oppose heterosexism. We encourage people to have a broader idea of gender identity and respecting trans folks and non-binary folks, anti-capitalism … We definitely oppose racism, and more broadly all forms of discrimination,” said Ms. Olle.

With this in mind, the store works hard to ensure that patrons feel safe among the shelves, both in the cafe and while attending events, which are held nearly every night in the bookshop. The event types vary, from their regular book clubs, to ukulele lessons, to a monthly reading series by women transitioning between genders.

At events, and on a daily basis, Bluestockings enacts a policy called “A Safer Space,” requiring patrons to follow a set of guidelines rooted in mutual respect for others’ identities. The enforcement is meant to educate, by allowing for “constructive conversations,” according to Ms. Olle, while also providing volunteers the authority to ask disrespectful patrons to leave.

“The Safer Spaces policy helps us to actualize our mission on a day to day basis,” Ms. Olle said. “People who are gender nonconforming or discriminated against for a variety of other factors can come here and know that will not happen to them.”

For many, Bluestockings is one of the few communities where they feel accepted. Something Ms. Olle attributes to the community the bookstore seeks to foster. “People are interested in looking at the problems of society with a very critical lens and really thinking outside of the box on solutions,” she said.

It makes sense then that they’d gather at, not only the last bookstore in the Lower East Side, but one of the few remaining radical bookstores in New York City. 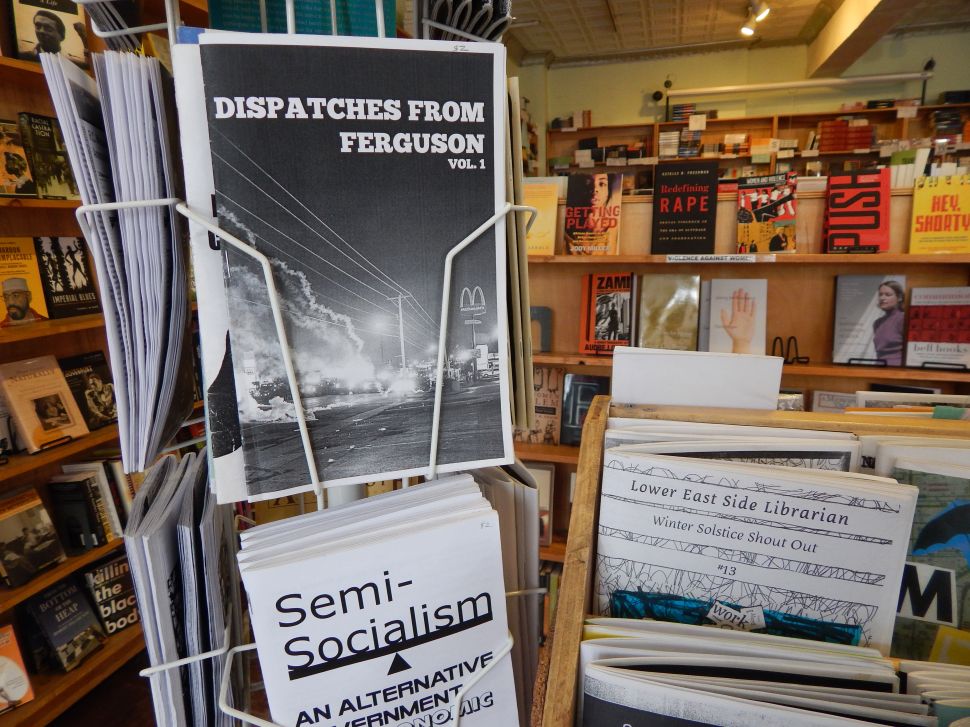