A respectable Sunday night crowd packed into Glasslands Gallery on Kent Ave in Williamsburg on a recent weekend to see Cassie Ramone, Spacin’ and neo-shoegaze act Crocodiles. There was little to indicate the club was closing in just two weeks’ time as bodies bounced under spiffy new decorations like a lamp shaped like a fluffy white cloud. “It’s nice to be back at Glasslands for one last show,” said Crocodiles front man Brandon Welchez before blasting through some gauzy garage-pop.

Opened in 2006 by local artists Brooke Baxter and Rolyn Hu, Glasslands is the oldest club in the micro-neighborhood that once included 285 Kent and Death By Audio as well as the nearby Monster Island, and will be the final domino to fall when Vice takes over the building this winter. It looks like a nicer version of DBA or 285 Kent: offbeat art installations, hand-built stairs, warehouse ceilings. But in contrast to the emotional final shows at Death By Audio and 285 (and the accompanying wave of emo tweets and Facebook updates), the North Brooklyn musical community has shed few tears for it thus far. Whither this sudden reserve?

The most obvious answer is that, on the continuum from “pure labor of love” to “Live Nation,” Glasslands was the most businesslike of the group, especially after booking duties were taken over by Popgun, an agency run by the ambitious, hardworking duo of Jake Rosenthal and Rami Haykal, in 2010. (They bought the club from Mss. Baxter and Hu in 2012.) “I’ve never seen us as a DIY venue,” says Mr. Rosenthal. He explains that while they take certain elements from the DIY movement—installations by local artists, literally doing the construction themselves—they also aimed for “sustainability,” and that meant raising the funds to comply with as many of New York’s demanding building codes as possible. They presumably draw better salaries than Death By Audio’s Edan Wilber, whose devotion to the artists he booked bordered on the monastic. And their liquor license means no all-ages shows.

“There isn’t anything wrong with people just owning a business,” says former DBA doorman Jordan Ianucci. “All things in the artistic community are about art and money to varying degrees, but it’s a spectrum. People care less about the professional end because there are tons of businesses, so why invest in one emotionally over another?” Stalkers frontman/garage rock mascot Andy Animal is less diplomatic. “It used to be cool,” he says. “The last time I played there, the rehearsal room I used to hang out in to get away from it all turned into a fancy office where they made me fill out a W2 after my performance.” Paying your taxes is so not punk.

Before all that shameless office building and rule following, Glasslands was a much scrappier place, though even then, they were constantly trying to improve the experience for patrons. “I wanted something a little more legit so I could find some longevity,” says Ms. Baxter, who’d previously run a space around the corner called Glass House, “so I talked to the landlord and he gave me a different space in the same building.” With no investors and little capital, they took it one day at a time. “Every show, we’d make a little money and use that money to get better monitors, or put in a new toilet,” she recalls. “We bootstrapped it. We had a lot of support from the community, people who would come help us build.”

The creatively decorated venue hosted a slightly different scene than could be found on the Todd P circuit of noisy weirdness circa 2006, although there was overlap. Early events included painting parties, Valentine’s Day dinners co-hosted by Kyp Malone of TV On the Radio, and Jonathan Toubin’s now legendary Soul Clap and Dance-Off. “We wanted to create an experience for somebody to come out and be visually and musically stimulated,” says Ms. Baxter. “I hate seeing music with just a black box and a stage.” One night, the cops raided the club only to find everyone dressed up like members of the French Revolution.

Mss. Baxter and Hu gravitated toward broadly appealing indie acts like MGMT, Chairlift and Yeasayer, many of whom were friends of theirs. Soon they were seeing lines down the block. As they prepared for the 2009 opening of their Greenpoint piano bar Manhattan Inn, they turned over most of the day-to-day booking duties to Messrs. Haykal and Rosenthal, whom Ms. Baxter describes as “kind of a unicorn in that they were young and enthusiastic, but also had their shit together and were responsible.” In 2012, Popgun bought the place from them and began booking events nearly seven nights a week. Boldface names included Franz Ferdinand, Das Racist, Xiu Xiu, Big Freedia, and most infamously, Lana Del Rey. They recently hosted a tongue-in-cheek funeral for the neighborhood.

The club’s new owners say their employees, most of whom stayed on after the sale, were instrumental in retaining some of the original vibe. “They’re the biggest part that makes it what it is,” says Mr. Rosenthal. “Glasslands could look the way it does, but if the staff didn’t give a shit about customers and bands, Glasslands wouldn’t be Glasslands.” That includes former doorman Johnny Coolati, who plays in local metal band Call of the Wild and is instantly recognizable by his long, blonde hair and leather jacket, and longtime bar manager Cameron Hull, a tall and serious fellow who plays in the band Suckers.

The final event will be a New Year’s Eve blowout featuring four secret guests, and while the Popgun guys are sad, they’re looking forward to the future. “We’ve got a lot of things in the works for next year, not all of which we can talk about,” says Mr. Rosenthal. (Ms. Baxter says they’re opening up a new venue in Bushwick.) “We’re gonna be hard at work and we’re kind of at peace with it … it’s not really in our nature to throw a big screaming fit about things you can’t control.” Maybe longtime patrons are simply following suit.

Toward the end of Crocodiles’ set, Mr. Welchez posed a question: “Does anyone care if I cry? Is it wrong for a man to cry? If it’s wrong, I don’t want to be right,” he said it with a smile on his face. Then he invited everyone up onstage to dance. 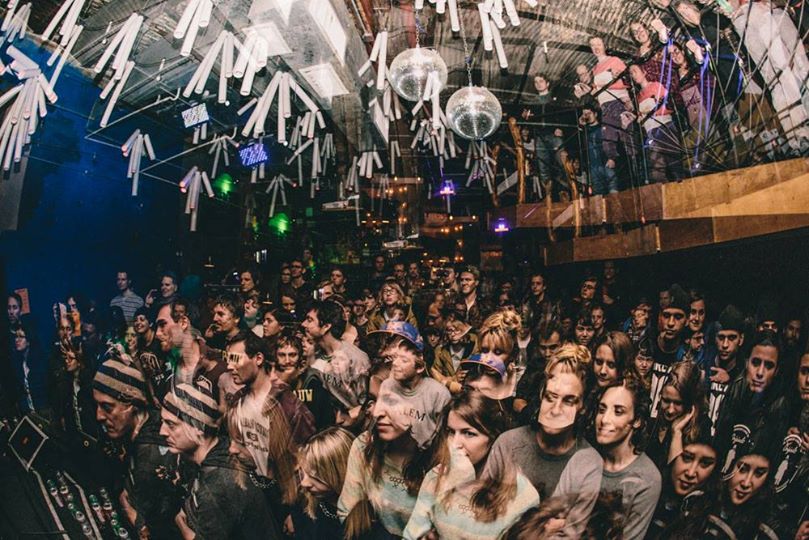