The mayor had promised to ban horse carriages on “day one,” but the issue proved a bit more complicated than that. It has placed the mayor in opposition to frequent allies in labor—the Teamsters, who represent the drivers, and the Working Families Party. But it has won him great favor from animal rights activists, including New Yorkers for Clean and Livable Streets, or NYCLASS, which campaigned hard against Mr. de Blasio’s primary opponent Christine Quinn, the former Council speaker.

(Despite Mr. Dromm’s assurances, polls by Quinnipiac University have found most New Yorkers do not want carriage horses banned.)

Those in favor of the ban emphasized the bill would include efforts to find the drivers new jobs—including offering them green cab medallions, and including plans for job training and the introduction of potential replacements for the carriages.

“We believe at the end of this process, we should be able to create a win-win situation, when those hardworking men and women that have been banned from this industry, they should be able to get a good job to continue brining the income to their family,” Mr. Rodriguez said.

But those who represent the drivers didn’t see anything “win-win” about the legislation yesterday, when they held their own large demonstration in front of City Hall.

Councilwoman Elizabeth Crowley said the legislation was not truly a matter of animal rights.

“It’s about political promises and money,” Ms. Crowley said during a Teamsters rally.

The bill will move through the Transportation Committee, chaired by Mr. Rodriguez. Previous horse carriage legislation has been considered by the Consumer Affairs Committee, but its chair, Councilman Rafael Espinal, opposes the ban and could have kept the legislation from the floor.

At a press conference this afternoon, Council Speaker Melissa Mark-Viverito said the last time the Council considered a major overhaul to the industry, it also went through the Transportation Committee. She stopped short of saying she’d support this specific legislation.

“As with any bill, it is going through the legislative process. I have expressed historically my support for ending the carriage horse industry,” Ms. Mark-Viverito said.

It remains to be seen just how much support the bill has in the Council; it was introduced with just two co-sponsors, Mr. Dromm and Mr. Rodriguez. They were joined at their rally by Council members Margaret Chin and Fernando Cabrera. The Teamsters, meanwhile, were joined by Mr. Espinal, Council members Costa Constantinides, I. Daneek Miller, and Ms. Crowley.

Mr. Dromm would not give a specific number of supporters lined up behind the bill, which is not expected to come up for a vote soon.

“We have a good amount of support. It’s a process. We’re gonna go through that process and in the end, I believe that we’ll have the votes to pass the legislation,” Mr. Dromm said. 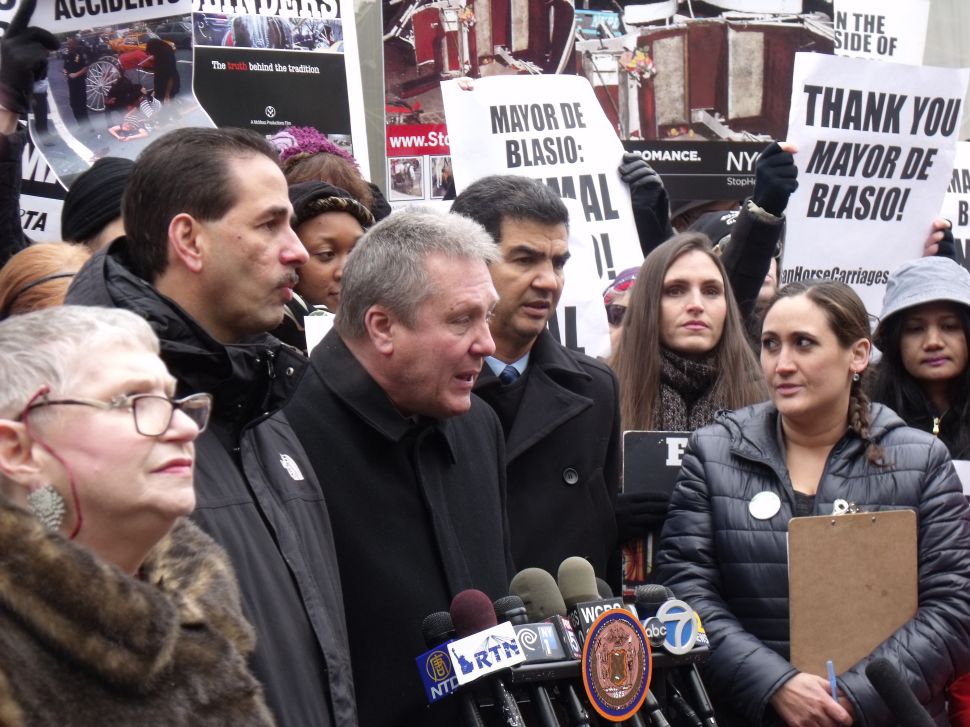