This Friday night, Craig Ferguson will end his nearly decade long run as host of The Late Late Show on CBS.

Earlier this week, he took some time out to reflect on his late night tenure, his approach to comedy in a sometimes tragic world and the guest he regrets not getting.

As he prepares to hang up his hosting duties, Ferguson admits that it’s with mixed emotions, saying, “Part of me is excited to be done, but it’s also like if you live in an apartment or house for a long time. You’re happy or you’re sad there and life goes its course over ten years, but when you leave that place, you get nostalgic about it. Even the bad stuff…you get sweet about it.”

Explaining his decision to leave the show, Ferguson said, “You know when you write something and you don’t know when it’s going to be finished and then you get to he end and you go, ‘oh fuck,’ it’s done. That’s what it’s like. But, the thing is, I think I’ve reached all of the corners of this box and I need to change boxes.””

Ferguson harkened back to how it all begin, explaining, “I filled in a few times for Craig Kilborn a few times and after the second time doing that I said, ‘Give me a week of this and I’ll fucking nail it.”

At that time, little did Ferguson know that he would eventually be tapped to be the regular host of the show and he admits that his stint got off to a bit a rocky start. “The first show is a bit of a blur. There were no test shows. The executive producer just kept telling me it’ll be alright and he kept saying, ‘it really doesn’t matter what you do tonight because you have to do it again tomorrow. ‘“He laughed and added, “Yeah, he was a reassuring presence.”

Ferguson’s level of fear about doing the show has clearly diminished a bit as he revealed, “I remember I that before those early shows had to go for a run to get rid of the excess energy. Now I wake up from a nap before the show. I used to be constricted with fear and now I’m like ‘are we on?’”

Although he became increasingly more comfortable doing the show, Ferguson felt the need to continually evaluate the best way to be funny about what he perceived were definitely not comedic situations. “I remember when Britney Spears had that very obvious mental breakdown.  Coincidentally, I was 15 years sober that weekend. It just struck me as someone who was in a desperate part of their life and it was being mocked and I still feel if there were cameras around at the time of my spectacular last couple of years of my drinking, it would be hard to get anyone to take me seriously after that. I felt terrible for her and looking back it does seem to me that that was a fork in the road for the show. I could have piled on with some very good jokes about that or I could try to not do that and try to follow some kind of more dignified path for me. I think there are people who handle that sort of stuff very well but your heart has to be in it and my heart wasn’t in it and I didn’t want to do it. That was a point where the show was starting to change a bit as well. Twitter and the internet are very good at reminding you when you fuck up, but I tried in my own way to kind of follow that path as much as possible.”

The struggle to stay true to his mantra seemed, for Ferguson, to be fought on a daily basis. “It became increasingly difficult at times when…where do you draw the line? Like, someone goes nuts with a gun. What do I say about that? It got difficult to decide what was bad enough to warrant me talking about it. Every September 11th I was like, ‘what the fuck am I going to do today.’”

A particularly tough time for Ferguson came when his father passed away.

“It was a year into the show. CBS wasn’t going to force me to do a show, it was my choice, so I phoned my mother, and she said, ‘your father would have said, go to work,’ and he would have but I couldn’t talk about  things like, ‘how about those play-offs,’ and so I just talked about him.”

In the competitive world of late night television, Ferguson admits that The Late Late Show didn’t contain cutting-edge material every night, saying, “Really, in all fairness, I don’t think we kept it fresh on all shows. We can all pretend that every show was great, but they weren’t. Sometimes you get into ruts. Sometimes I would tell my wife, ‘I can’t fucking do this anymore,’ but you just keep going. The saving grace is that most people that come on talk shows are really interesting, even the ones that are in a mental straightjacket of their own fame, you tickle them a little and they free up a bit. As long as I enjoyed the conversations or the sketches I thought it would be alright.”

Talking about what he considered to be some defining moments on the show, Ferguson explained, “I think it’s hard to say, there are so many shows. I think maybe the first one. It used to happen, and it still does, I would go out to do the monologue and there are lights and people and I would  think, ‘this is a long way from where I’m from.’ Sometimes, like when I’m having a laugh with William Shatner, I’m thinking, ‘he’s fucking Captain Kirk!’ He’s saying my name and knowing who I am and having a laugh with me and I’m thinking, ‘what the hell!’ It’s incredible. It’s a very surreal thing.”

After closing out The Late Late Show, Ferguson is moving on to producing and hosting the syndicated game show Celebrity Name Game and possibly returning to his roots on stage, admitting, “I really like to do stand up comedy. For me it’s almost relaxing”.

As he prepared to tape his last show, Ferguson confessed to one major regret, admitting, “At the beginning I wanted [author] Kurt Vonnegut to do the show. We approached him but he was in New York and we do the show in Los Angeles. Now, we would have said, ‘ok we’re going to have to go to New York to get him,’ but that was the first year. I missed him because he passed away and that’s a shame. I think we would have gotten on famously.”

Taking over after Ferguson’s departure will be British, Tony-winning actor James Corden. Ferguson reached out to him with some advice. “I called him after I heard that he got the job. He said, ‘I’m so frightened,’ and I said, ‘of what? I was the 8th banana on The Drew Carey Show before this. You’re a mega star compared me. It’s fine, I’ve set the bar very low.’”

The final episode of The Late Late Show with Craig Ferguson airs Friday night December 19th . His final guest will be another titan of late night television, Jay Leno. 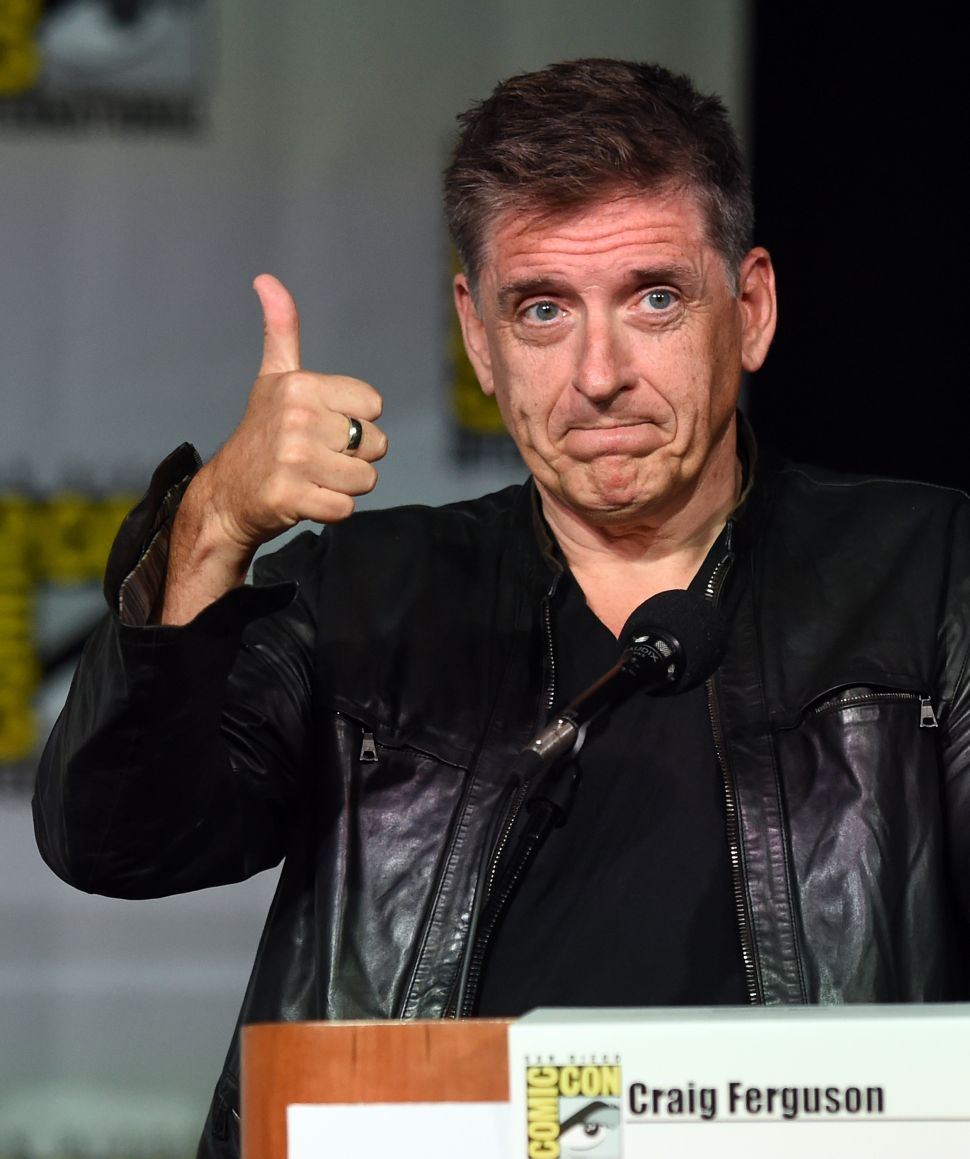