Did you catch Stephen Colbert’s “The Colbert Show” last night? I was just flipping through channels while your mom was downstairs rolling latkes for Chanukah tomorrow night. She is asking if you got our gift from PayPal.com like you asked for, because she never got a thank you over email or snail mail and she’s very worried about sending cash over the Internet. Just look at what they were able to do with a couple of passwords at Sony Pictures! (By the way…I have a LOT of thoughts on this issue, but that’s for another email.) So just a heads up, ha ha. But also, please give her a call before sundown tomorrow and thank her for your generous gelt. Ha ha.

Anyway, I was channel surfing before “Lockup” started, because I’ve been staying awake later these nights. It’s what you might call a “life hack”… When you are my age, we just call it smoker’s lung!

The coughing gets worse at night and bothers your mother so I’ve been sleeping on the couch with the sleep apnea mask, which does not have great lumbar support, so most nights I’m tossing and turning until sometimes midnight. Such is the life of getting to be an old, I guess. Ha ha.

I Do not actually have lung cancer, by the way. That was a joke. Your mother said my humor doesn’t “translate” well online. Good thing I’m not asking anyone to pay me for my blog posts, like someone I know!

That is also a joke. I know you are trying hard out there, buddy. Have you got any leads yet?

So this Colbert guy…was last night really his last show? He said it was, but you can never tell with that guy. Half the time, he is pretending about his opinion on real news, right?

Is he the one that is going to Letterman or that foreign man with the skeleton? Or is it Conan? Your old man is really out of the “news loop” these days!

So here’s my two cents on the last episode, since you asked. (Ha ha.)

-Intro too long and had too many graphics.

– Has anyone done a blog post/investigative news piece about this man’s relationship with pistachios? Smells fishy to me. Maybe you could break the story! And I won’t even charge you for the idea! Ha ha.

-Isnt he supposed to be Bill O’Reilly? If so, someone should have fired his hair and makeup people a long time ago because they did a piss-poor job. Have you SEEN Bill O’Reilly? Nothing alike.

-What is with this word of the day nonsense this is not “Sesame Street.” Or maybe it is. To quote a movie you are probably too young to remember, “I’m getting too old for this snot!”

-Who are all these people singing? I recognized Kissinger and Trebek and Cookie Monster. But then again, I did not have on my glasses. A good idea for a blog post (not that anyone’s asking!) would be to list who these people are and tell me why I should care.

-Most of this was just silly.

That Bout wraps it up! Hope you are doing well and call your mother! Ha ha.
Love,

Dad
PS: A note on James Franco:
I Am not a fan of his work and have not seen many of his movies since the one about the arm, but I would die before letting someone take away his AMERICAN RIGHT to make and distributed them. I think what happened with Sony was DISGUSTING and a GODDAMN SHAME. Which ironically is what I said walking out of “Spring Break.” Ha ha. 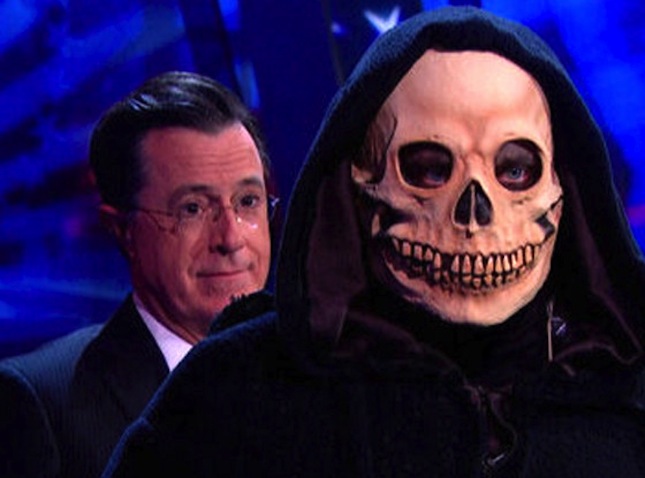