Comedian, playwright and producer Judy Gold is the sequential UWS schmoozer; something that transmits in the moment we sit down to order at Edgars Cafe on 92nd and Amsterdam. The star and co-creator of off-Broadway one-woman shows like 25 Questions for a Jewish Mother and The Judy Show: My Life as a Sitcom, Gold, finds her latte cup “too annoying.” She good-naturedly kvetches to the staff about her coffee needing less milk and 2 or three extra shots of espresso. But the Emmy Award-winning writer and producer knows she’s dealing with her extended family of Manhattan’s Upper West Side; later we detour for several minutes on our server’s tattoos, which bear the name of all six of her children, all spaced out one year apart. (The kids, not the tattoos.) Ms Gold commiserates about her own two sons, Henry and Ben, before settling on the quiche.

I know you don’t want another broad question about women in comedy, so let me ask: how has the New York stand-up scene changed since you started?

Back in the old days, there were no cell phones, I was the backup at Catch A Rising Star. People couldn’t call and say they were stuck in traffic. So I was paid to sit at the bar and hope someone wouldn’t show up. The other backup was Chris Rock. He got on and just destroyed. We got paid $50 per show to sit there. And it’d be very annoying, because for me, someone more seasoned would just show up and they’d immediately get the spot over me. “Oh, great, Jerry is here…”

So it was the drop-ins that ruined it for everyone!

I’d say social media has ruined standup comedy. I feel like the ability to sit at home and watch everything on your computer prevents people from seeing live shows. I interviewed Bette Midler about her new album on Sirius/XM, and we were talking about working the clubs. Now all performers do huge arenas, and there are all these pyrotechnics and blah blah. But when Bette started, it was just you, on a stage alone, you had to be everything to that room – a true entertainer. It’s like that for comedy, too.

There are still clubs like that: The Comedy Cellar, Eastville, Carolines, Stand Up New York, Comic Strip, The Village Underground. Eastville is like old time: there’s something really humble about it. I used to work at Comic Strip; Catch a Rising Star was where it started. I wish people still went out and did that.

Did the New York comedy scene reinforce your desire to go back to New York after working on projects out in LA?

You’ve chosen the Upper West Side as a home base. Any particular reason?

I mean, for me it was such a familiar, sensory place. I grew up in New Jersey, but my mother and I came to the city a lot. We’d go to the theater, and my mom grew up here, but the real reason we would come in was because there was only one shoe shop that had my size in the entire tri-state area. It was called Tall Gals Shoes, and it was on 36th between 5th and Madison. We would make our two or three times a year trip, and we’d take the train and subway, and have lunch. Four generations of my family went to this shoe store, because we were all tall. And my mother in New York – she was a different person. In New Jersey, she was miserable. But the moment we got off the subway, she was alive.

But we’d go in, and the shoes were so fucking ugly. I was 10 and a size 10, 10 and a half, and all they had were old lady shoes. But I fucking loved this place: they’ had one of those vacuum machines where you’d put something in a tube, and it’d suck it down. I loved it.

When I started doing stand-up, I lived on West 81st, on the ground floor of a brownstone with an opera singer who needed a roommate. I had the backroom and outside space. His cat would bring in dead pigeons; and he would say “It’s because she likes you!” But I’m a Jew…I can’t deal with dead pigeons.

And you still live on the Upper West Side?:

Yeah, that’s the sad thing about New York, though, is the real estate. I’ve been living in this building for 25 years, in my 950-square-foot home with a wife and two kids. My neighbors ARE my family.

But people have passed away, and the building got bought, and the new owners are renting to college kids from Columbia, people whose parents have money. It was all families before. I’m 52, I came here in 1984 as a comic, I found a place to live, and I worked. I type-set during the day to make enough money for health insurance. You couldn’t do that now. The intellectuals, bohemians, the salons…you couldn’t move here after college now and experience that. It’s just too expensive.

There was a Celebrity Wife Swap episode with your family and Penn Jillette’s over the summer. It was very…informative, shall we say?

The reason I did it was because they had never had a same sex couple on the show. And I thought, “We’re so normal, people should see that.” You know, I’m not wealthy, and I thought it would be something that’d be good to show: this nontraditional kind of family that’s pretty traditional.

I think I had a harder time (with the swap), just because of our lack of space in our apartment. And we’re Jewish! I love being Jewish! I love the traditions. We do Shabbat dinner, we like to have one day where we sit and hang out. And Emily Zolten Jillette–who was swapped with my wife, Elysa, would want to hang out with us after shooting, just to hang out and watch SNL. You know, on our crappy little screen.

But the Jillettes are EXTREMELY atheist. My wife called so upset after she tried to nudge her own Shabbat plans. She wasn’t even sure if she stuck up for the Jews enough.

There’s a lot of Penn rolling his eyes and dismissing the whole routine.

I was so shocked: I get why someone would be atheist, but there was this total lack of respect. What does it hurt, to see how other people live?

You’re doing a show at Caroline’s the 24th and 25th. Is that a specific Jewish statement?

First of all: they are at 7:30, so Christmas Eve night it’s early enough for the non-Jews. And Christmas Day it’s late enough for when you’re ready to kill your fucking family. But you know, Jews have this tradition: Go to the movies, get Chinese food. Well, Ruby Foos is right next door…I just think you should go out and see a live performance with your family. 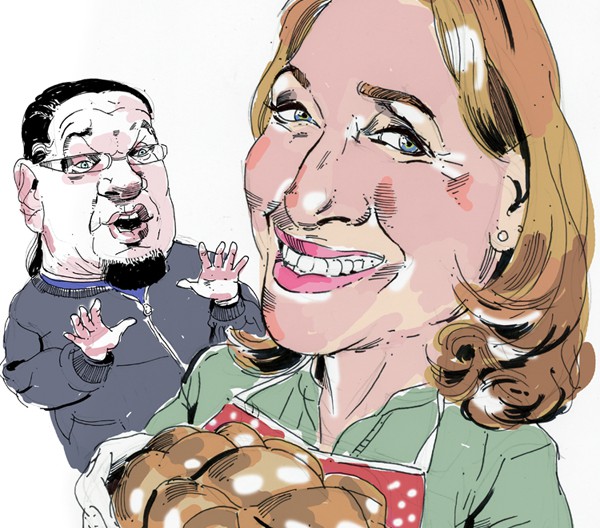