You’re not even welcome at my funeral.

That’s the message the Patrolmen’s Benevolent Association is asking rank-and-file cops to send to Mayor Bill de Blasio and Council Speaker Melissa Mark-Viverito, who the union has insisted are rolling out anti-cop policies and have not supported the police force.

“DON’T LET THEM INSULT YOUR SACRIFICE!,” a bold red message on the union’s webpage reads. “Download and sign a request that Mayor de Blasio and City Council Speaker Melissa Mark-Viverito stay away from your funeral in the event that you are killed in the line of duty.”

The form itself, which allows an officer to fill in their name, gets more specific for the reason behind spurning the presence of the officials.

“Due to Mayor de Blasio and Speaker Mark-Viverito’s consistent refusal to show police officers the support and respect they deserve, I believe that their attendance at the funeral of a fallen New York City police officer is an insult to that officer’s memory and sacrifice,” the form reads.

A filled out version can be delivered to an officer’s union delegate, the website advises.

Mayors and other top city officials routinely attend funerals for police killed in the line of duty, which are rare but somber occasions in New York City. Mr. de Blasio delivered remarks at the funeral of Dennis Guerra, a police officer killed in a fire set by a bored teen at a Brooklyn housing project, in April.

Mr. Lynch has been outspoken critic of Mr. de Blasio, particularly in the wake of the death of Eric Garner, an unarmed black man who died on Staten Island as a police officer tried to arrest him. Mr. Lynch has been a strong defender of the officer, Daniel Pantaleo, and said Mr. de Blasio’s remarks about his son’s interactions with police left officers “thrown under the bus” by the mayor.

The union leader and others have repeatedly slammed the mayor’s police policies—part of Mr. de Blasio’s efforts to bring police and community closer together—as endangering and insulting police. Ms. Mark-Viverito, meanwhile, has been openly critical of a grand jury’s choice not to indict Mr. Pantaleo.

The mood does not seem to be getting less divisive: after weeks of protests in the city’s streets against police officers—and two more set for this weekend in Washington and in New York—cops are now planning their own pro-police rally next week.

The PBA is also locked in a contentious contract negotiation with the city, which has moved on to binding arbitration. It was not one of the eight uniformed unions accepting a contract deal this week.

In a joint statement, spokesmen for Mr. de Blasio and Ms. Mark-Viverito called the petition “incendiary” and “deeply disappointing.”

“This is deeply disappointing. Incendiary rhetoric like this serves only to divide the city, and New Yorkers reject these tactics,” said Phil Walzak, a spokesman for Mr. de Blasio, and Eric Koch, a spokesman for Ms. Mark-Viverito. “The mayor and the speaker both know better than to think this inappropriate stunt represents the views of the majority of police officers and their families.”

Updated with comment from Mr. de Blasio and Ms. Mark-Viverito

See the form below: 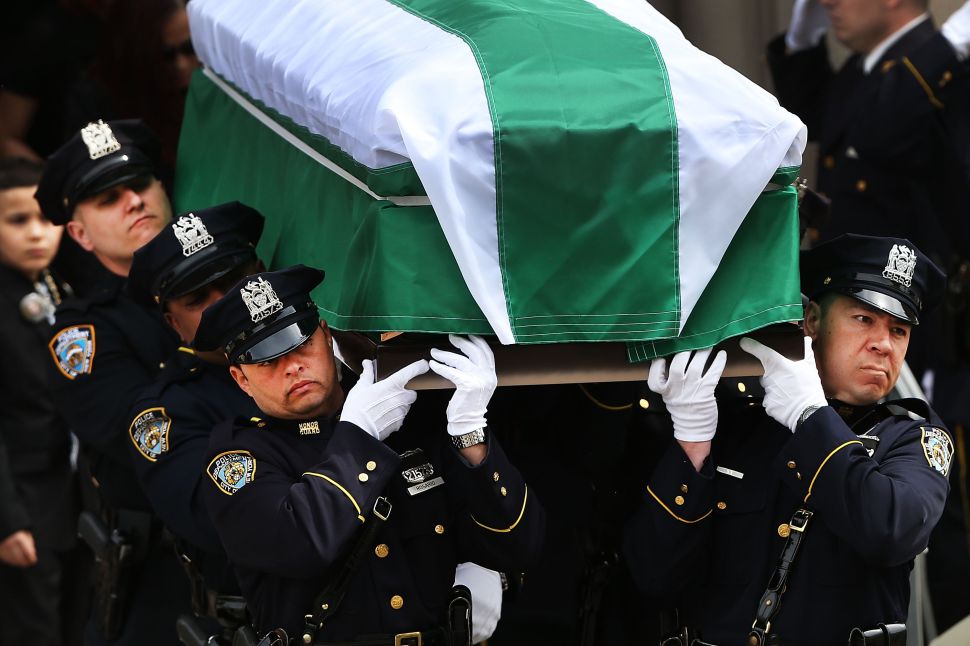