Council Speaker Melissa Mark-Viverito echoed today the mayor’s call to suspend protests after two police officers were murdered on Saturday, though she diverged with him on the question of whether the media has fueled the city’s heated climate.

“Now is the time to tone down the rhetoric and come together as a city, to remember Officers Liu and Ramos. As such, we join the call to ask that protesters on the street stop out of respect to the NYPD, to the families of the officers we’ve lost and out of respect to the City of New York,” Ms. Mark-Viverito said at a City Hall press conference.

“The families have called for unity and we should honor that. A stoppage will give our city a chance to heal as one,” she added.

Flanked by much of the City Council, Ms. Mark-Viverito said she was disgusted by the recent assault on police during a large protest on the Brooklyn Bridge and also condemned some of the anti-police chants heard at marches.

“What happened to our officers during the protests on the Brooklyn Bridge was disgusting. Chants of wanting to see police officers killed is hateful and repulsive. And denigrating our police officers’ service to this city is unacceptable,” she said.

Mayor Bill de Blasio said yesterday that the anti-police brutality protests which have roiled the city since grand juries voted not to indict police officers for the deaths of black men in Feguson, Mo. and Staten Island should temporarily stop, angering some activists who said a struggle for justice should not be put on hold. Mr. de Blasio said the marches should cease until Officers Wenjian Liu and Rafael Ramos, ambushed and killed in their patrol car, have funerals.

Like the speaker today, Mr. de Blasio offered no clear timeline on when he believed protesters should again take to the streets.

While Mr. de Blasio sought to blame the media for unnecessarily highlighting the more angry, fringe elements of the recent protests, Ms. Mark-Viverito curtly disagreed with his line of reasoning.

“I don’t share in that thought and I will leave it at that,” she said.

Police unions and conservatives have attacked Mr. de Blasio and Ms. Mark-Viverito, two liberals dedicated to reforming the way the NYPD interacts with communities of color, for not adequately supporting the police. In the more right-leaning neighborhoods of the city, both are deeply unpopular.

In addition to Ms. Mark-Viverito, Council members Vanessa Gibson, the chair of the public safety committee, and Vincent Gentile briefly addressed the media. Mr. Gentile, a Democrat, represents a southern Brooklyn district where support for the NYPD is high and the progressive movement is viewed more warily.

“In light of the tragedy that happened on Saturday, many of us, myself included, have been out to the local precincts,” Mr. Gentile said. “This Council has been always supportive and will continue to support our police officers.”

“Any assault against our police officers is unimaginable, unthinkable,” he added. 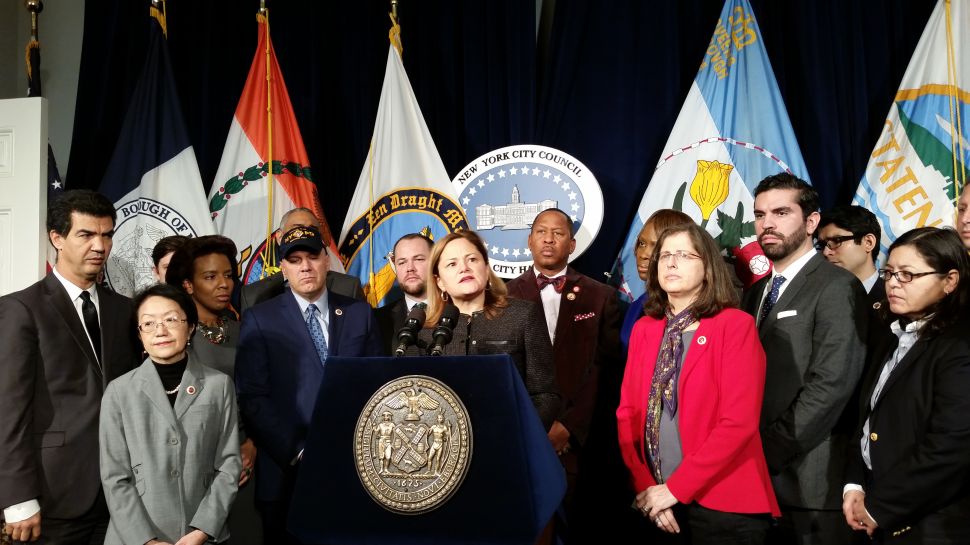