This whole “Cyber Monday” thing has become something of a win/win for media organizations. Not only does it provide a seemingly endless stream of news stories about the state of the economy, but subscription departments at newspapers and magazines get to promote their own deals pegged to the made-up retail “holiday” that banks on office workers ordering things online on the Monday after Thanksgiving.

Black Friday purchases were down an estimated 11 percent, according to The New York Times. And expectations for online sales today are also down. “The National Retail Federation expects about 127 million people to shop online Monday, down from about 131 million who planned to shop online last year on Cyber Monday,” USA Today reported this morning.

But that hasn’t stopped publications from offering their own deals today, pegged to “Cyber Monday.” This morning, we woke up to an inbox full of deals from every retailer we’ve ever purchased something from (as well as many that we’ve never actually bought anything from). Interspersed with these offers were emails from a slew of publications with one-day only sales.

Today, The Wall Street Journal is offering a three-month-long introductory digital subscription for just $1 (add print for an extra $4). When the three months are up, your credit card will be charged $28.99 a month. Condé Nast has a “Cyber Monday Flash Sale” deal for most of its titles (The New Yorker is $50; everything else is $20 or less).

The New York Times is touting its’ “Biggest Sale of the Year. But Not for Long”: order by 9 a.m. on Dec. 3 (Cyber Wednesday?) and get 50 percent off a Times subscription for the next 26 weeks. But the Times isn’t limiting its “Cyber Monday” specials to newspaper subscriptions. The New York Times is offering discounts on merchandise at the Times store like $25 off a cookie jar decorated with “two different holiday-themed crossword puzzles, edited by Will Shortz” and $15 off an old-timey milk crate with a drawing of an egg cream.

Cynicism aside, if consumers are going to fall for “Cyber Monday” deals, it may as well be for content. Or at least an umbrella and winter cap with the Times logo. 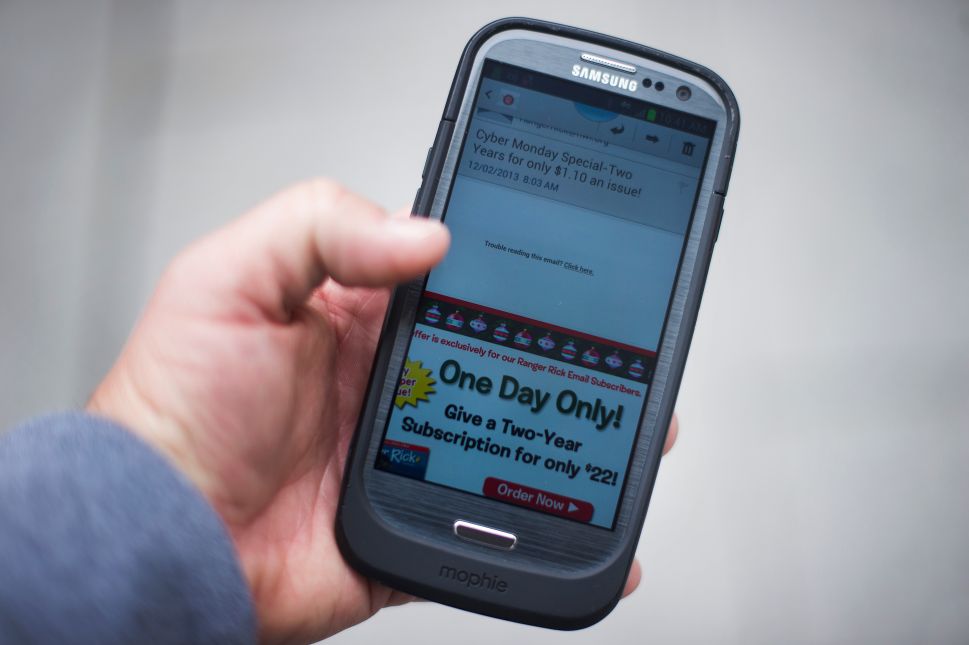