Mayor Bill de Blasio said today he would personally push for the passage of a bill banning horse carriages, set to be introduced in the City Council this month.

“Any time we put forward a policy proposal I get involved,” Mr. de Blasio said during an unrelated press conference in Brooklyn. “And I certainly intend to talk to Council members about it, but I think we’re going to have a lot of support in the Council.”

The legislation — to be introduced by Councilman Daniel Dromm — would ban the industry and fulfill a campaign promise of Mr. de Blasio’s, albeit one he said would occur on “day one.” Mr. de Blasio’s promise to get horse carriages off the streets was met by support from animal rights activists including New Yorkers for Clean Livable and Streets, or NYCLASS — who advertised heavily against one of his opponents in the primary, Christine Quinn. But it also put Mr. de Blasio at odds with two frequent allies — the Teamsters union, which represents the carriage drivers, and the Working Families Party.

And it remains to be seen whether there are enough votes in the Council to pass the bill — a slew of members in recent days have said they are undecided on the issue. Others are flat-out opposed to the ban, including Councilman Rafael Espinal, who chairs the Consumer Affairs Committee through which it had been thought the bill would need to pass. Polls have also shown the majority of New Yorkers are opposed to the ban

“It’s gonna be a legislative process like any other. The details of the bill will come to in a few days, we’ll begin the process of talking through it with Council members, why we think it’s important for the future of the city to do this right, and also engaging in a public dialogue,” Mr. de Blasio said. “I have a lot of confidence that the common sense will win the day here, that it just doesn’t make sense to have horses in the middle of the streets in the busiest city in the country.”

Among the details in the bill is a plan to offer carriage drivers green cab medallions, worth up $7,000, without a wait. But Mr. de Blasio said the city is still considering offering drivers vintage electric cars for Central Park tours, too, saying his focus is to keep the drivers working either in the tourist industry around the park or in something related to horses.

But the mayor was not swayed by arguments that ditching the carriages would hurt the city’s tourism industry.

“It’s a matter of common sense that people do not travel from all over the country, all over the world, to New York City just to take a horse carriage ride,” he said.

As for his own experience in Hansom cabs, Mr. de Blasio said he’d never taken a romantic ride with his wife, Chirlane McCray, in one of the carriages — though he did think he had perhaps taken a ride as a child.

The mayor said he understood those who want to keep the horses around — who have been buoyed by a “Save Our Horses” campaign in the Daily News.

“When I first heard these proposals from the advocates who believed we should ban horse carriages, I was dubious. I believed, well, it’s part of New York, we should keep it because it’s traditional,” Mr. de Blasio said. “A lot of them talked to me over time and said, ‘Do you keep something traditional if it’s immoral?’ Well, obviously the answer is no.”

The mayor’s comments came just before a rally in support of the ban planned by NYCLASS. Supporters of the carriage industry have lambasted the proposal, with George Miranda, president of the Teamster Joint Council 16, saying yesterday the bill would leave 300 people unemployed.

“The administration wrote this bill without input from the union that represents these drivers. Without visiting the stables where the horses live. Without listening to the 63 percent of New Yorkers who have voiced their support for the Central Park carriages,” Mr. Miranda said. 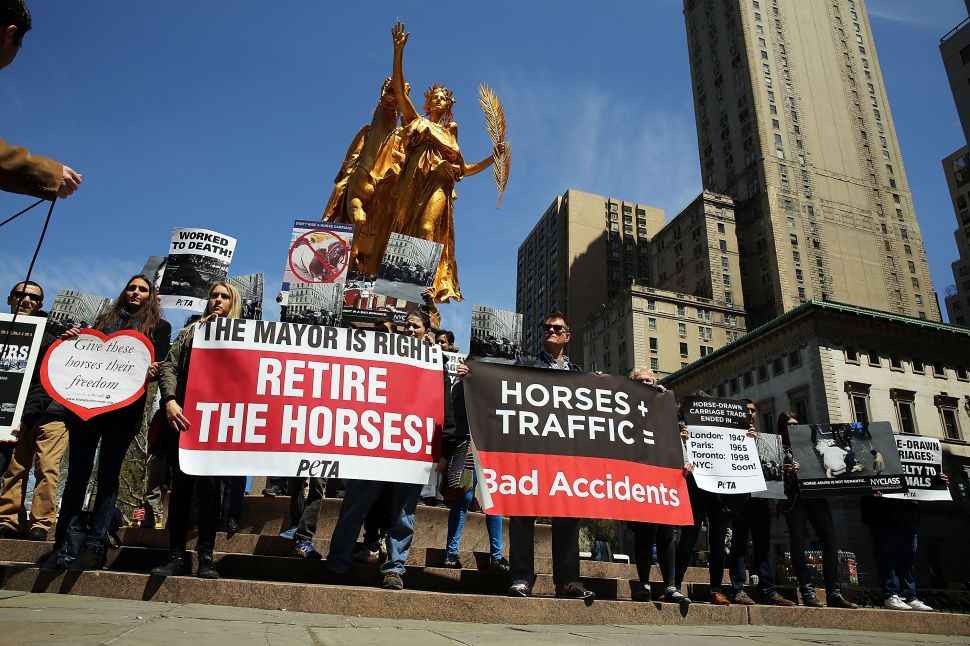