Though he called it a “very painful day,” Mayor Bill de Blasio refrained from criticizing a grand jury’s decision not to indict a police officer in the death of Eric Garner today — and said the investigation into his death is not over.

“So many people in the city are feeling pain right now, and we’re grieving again over the loss of Eric Garner, who was a father, a husband, a son, a good man—a man who should be with us and isn’t. That pain, that simple fact, is felt again so sharply today,” an emotional Mr. de Blasio said in remarks delivered at the Mt. Sinai United Christian Church on Staten Island.

The mayor’s brief speech, after which he did not take questions, came several hours after Staten Island District Attorney Daniel Donovan announced a grand jury of 23 people declined to bring any charges against Daniel Pantaleo. Mr. Pantaleo, who is white, was captured on video this July wrapping his arm around the neck of Garner, who is black, as police sought to arrest him for selling untaxed cigarettes on a Staten Island street. Garner, who had been resisting attempts to handcuff him, shouted that he could not breathe repeatedly, before losing consciousness. The medical examiner ruled his death a homicide as a result of a chokehold, a maneuver prohibited by the NYPD, and the death stoke tensions between police and communities of color in the city.

While the grand jury’s decision means no charges will be brought against Mr. Pantaleo by local authorities, many have urged the federal government to conduct its own investigation and bring charges against the officer for violating Garner’s civil rights.

“One chapter has closed with the decision of this grand jury. There are more chapters ahead. The police department will initiate now its own investigation, and make its own decisions about the administrative actions it can take. The federal government is clear engaged and poised to act,” the mayor said.

But in addition to speaking about what lies ahead, Mr. de Blasio also spoke emotionally about the effect Mr. Garner’s death has had on the city and urging those who are upset at the decision to eschew violence for peaceful protest. He relayed wishes from Garner’s father and son that those who wanted to dignify his life should remember he was a peaceful man.

“You will not sully his name with violence, or vandalism. That doesn’t bring us closer to a better community. The only thing that’s ever worked is peaceful protest. Nonviolent social activism is the only thing that has ever worked,” Mr. de Blasio said. “People should listen to those we say we stand in solidarity with, fulfill their wishes, and work for change in the right way.”

The mayor also spoke of the pain felt by Garner’s father—saying he could feel that “things will never be whole again” for him. And Mr. de Blasio said the issue is a “profoundly personal” one for him, as the father of a black teenage son.

“Chirlane and I have had to talk to Dante for years about the dangers that he may face,” Mr. de Blasio said, even as a law-abiding young man. “We have to literally train him, as families have all over this city for decades, in how to take special care in any encounter he has with the police officers who are there to protect him.”

That, Mr. de Blasio said, is a painful and confusing contradiction for many across the city. But he promised change to that relationship between the police and the community had already begun, and that it would continue. But he echoed comments he made earlier this week about having to overcome “centuries of racism” at play.

“These changes will matter. They will affect millions of people. They will take time, but that is not in any way an excuse or a willingness on our part to do anything but the fastest change we can,” Mr. de Blasio said. 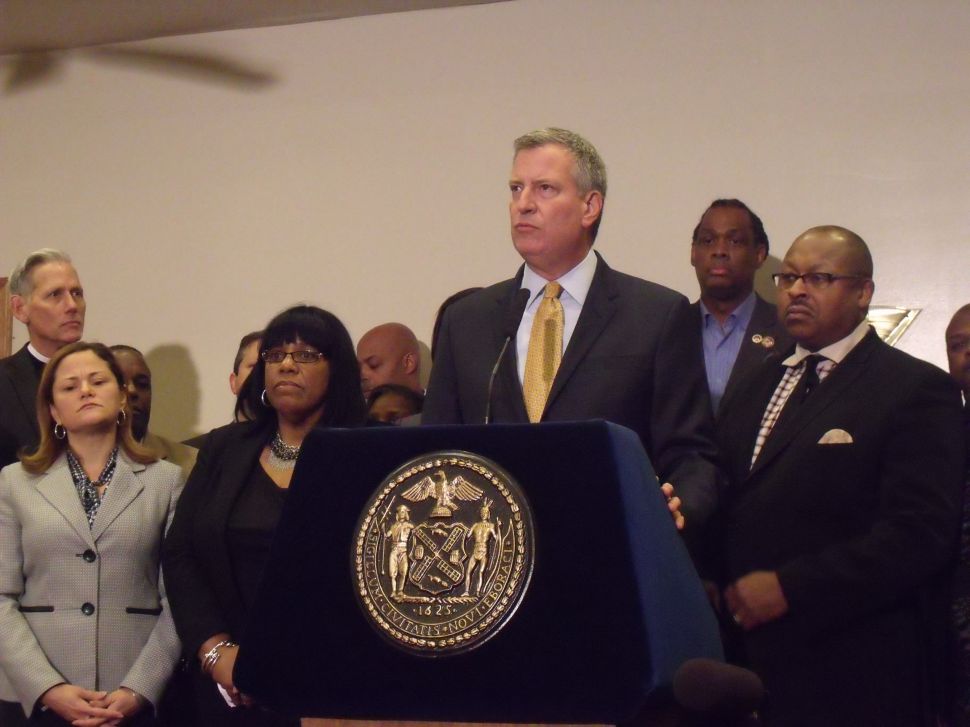