Mayor Bill de Blasio today touted crime statistics showing the last four months to be the safest on record since 1993, after reforms to policies like stop-and-frisk that his critics had argued would cause crime to climb.

“When you create that unity, you reach higher heights of safety and find possibilities that no one knew existed when there was a division between police and community,” Mr. de Blasio said today at a press conference in the Ingersoll Houses in Brooklyn. “After 11 months, we can say that this vision is coming to fruition. We can see with our own eyes, and we can experience in our own lives, a safer city and a city that is becoming more unified.”

After years of decline, crime in the city was down once again by 4.4 percent at the end of November, according to the NYPD–with homicides down by 6.8 percent, robbery down by 14.4 percent, and rape down from 2.9.

Shootings are still up slightly compared to last year–something many critics seized on this summer as the number of shootings, especially in public housing, appeared poised to spike even higher. But Mr. de Blasio and Police Commissioner Bill Bratton credited summer initiatives like Operation All Out with stemming the tide, and the period from August to November saw the fewest shootings for the same timeframe since 1993.

Those drops in crime come as the use of stop and frisk–which advocates and Mr. de Blasio himself had insisted was being used unconstitutionally and unfairly targeted minorities–has also plummeted, by 79 percent over the first three-quarters of the year. Mr. de Blasio ran largely on reforming the policing practice.

“Although many were predicting that if stop, question and frisk went down, crime would go up, it doesn’t work that way,” Mr. Bratton said today.

Mr. de Blasio’s general election opponent, Republican Joe Lhota, conjured up images of New York’s bad old days in campaign ads and argued Mr. de Blasio’s policies would make the city less safe. And even after his election, the mayor has faced the same criticism–police unions have derided him as anti-cop, and Sergeants Benevolent Association President Ed Mullins once argued New York City would be too dangerous to hold the Democratic National Convention.

“We’ve known from the beginning where we wanted to go,” Mr. de Blasio said today, “and I knew from my experience working with police all over the city and working with community residents, I knew we weren’t going back. And I knew we were going forward. And I knew we had the right team to bring us forward. I never worried about some of those attempts to divide us–and they were attempts to divide us.”

Mr. Mullins was unavailable to comment today, a spokesman said, and a message to a Patrolman’s Benevolent Association spokesman was not returned. And Mr. Lhota wasn’t doing any criticizing today — he congratulated the mayor and his team, via Twitter.

“It’s still black and brown, black and Latino New Yorkers who are being disproportionately stopped and that’s what we have been organizing to end. The decrease in stops does not mean that there isn’t still discrimination happening. But also, there isn’t an indication that the stops that are happening are constitutional either,” said Priscilla Gonzalez, organizing director for Communities United for Police Reform.

While the number of stops has fallen, Mr. Bratton acknowledged today that the racial breakdown of those stopped remains about the same as it did under former Mayor Michael Bloomberg, when critics like Mr. de Blasio derided the practice.

But both said the policing technique was being used more effectively — with about 16 percent of those being stopped now being arrested, as opposed to about 7 percent in previous years. Still, that means more than 80 percent of those stopped are guilty of nothing.

“It’s much more focused and it’s much more accurate, as reflected in, we’re getting a higher rate of gun seizures in the stops we are doing,” Mr. Bratton said.

While Mr. de Blasio said today the relationships between police and community are improving, to many observers they feel much more tense than a year ago: Mr. de Blasio made his upbeat police announcement the same week a grand jury is expected to decide whether to indict a police officer in the death of an unarmed black man on Staten Island, and following days of protests in city streets relating to a police shooting in Missouri.

“For us, the issues of discriminatory and abusive policing practices that created his rift between communities and the police, they’ve existed for decades,” Ms. Gonzalez said. “So repairing that is gonna take a long time, and it’s really gonna require a long-term commitment from this administration and future administrations.” 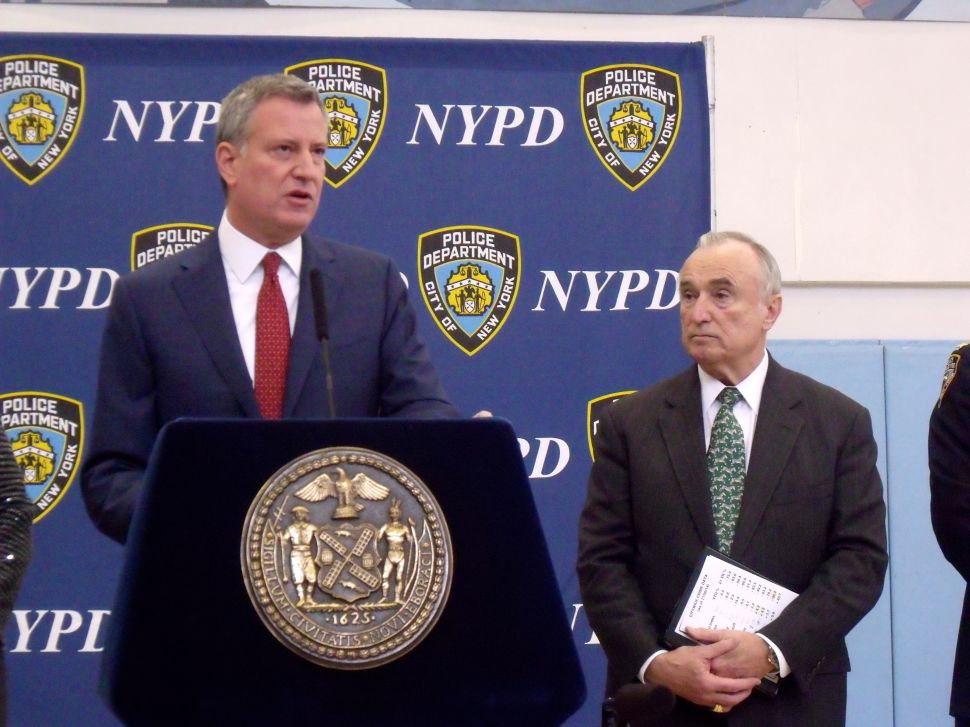