A trio of city council members and several animal rights groups rallied outside City Hall today to support legislation that would ban the horse carriage industry in New York. The bill, championed by Mayor Bill de Blasio, will be introduced at a City Council meeting next week after almost a year of deliberation.

Led by New Yorkers for Clean Livable and Streets, also known as NYCLASS, the activists and council members at the press conference expressed optimism that the legislation would ultimately pass the City Council next spring and become law, despite the opposition of organized labor and a sizable number of council members.

“We’re looking at the end of the process being May ’16,” Councilman Daniel Dromm, a Queen Democrat, told reporters, referring to the year when the industry will be phased out, according to the legislation. “Somewhere I would hope within the next, within the spring, we’ll be able to pass this.”

The Teamsters union representing the drivers panned the proposal and the Central Labor Council reiterated their opposition to the bill, arguing that the horses are treated well already and 300 drivers would lose their jobs.

A handful of council members, including Mr. Dromm, a sponsor of the legislation, back the bill. Manhattan Council members Ydanis Rodriguez and Mark Levine spoke at the press conference and representatives from Helen Rosenthal Margaret Chin’s office appeared at the event.

But a vast majority of council members are undecided, worried about angering Mr. de Blasio or the unions they are closely aligned with. At least one liberal council member, Ritchie Torres of the Bronx, said yesterday that the overheated debate around the issue was an “utter embarrassment.”

Mr. Dromm, typically an ally of Mr. Torres’, took exception to the comment.

“It’s not an embarrassing issue, it’s a very serious one,” Mr. Dromm told the Observer. “If somebody thinks that’s silly or an embarrassment, I say, ‘Shame on them.'”

Most speakers spent the press conference explaining again why the horse carriages needed to leave the city streets, citing past accidents and the allegedly inhumane treatment of the horses. Mr. Levine scoffed at the notion that a ban would hurt New York’s robust tourism industry. Activists, about two dozen in number, held up signs like “Mayor de Blasio: Animal Hero!”

NYCLASS, the well-heeled animal rights group that some say influenced Mr. de Blasio’s position by attacking a top rival in last year’s mayoral race, had nothing but kind words for the mayor after privately griping over the summer that he was moving too slowly on their signature cause.

“He’s shown he has concern for all residents, two-legged and four-legged and now it’s only a matter of time before we get these horses off the streets and start to transition our city to one that does tourism without using and abusing animals,” said NYCLASS Executive Director Allie Feldman. 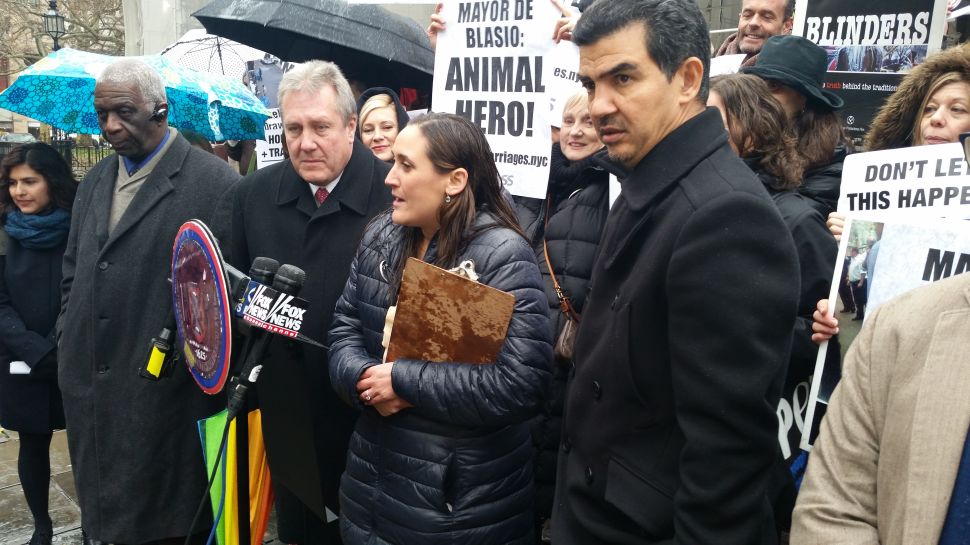