State Senator Jeffrey Klein, a Bronx Democrat, will introduce legislation next year that would make it easier for domestic violence victims to secure public housing.

Mr. Klein, appearing with fellow Bronx Democrats Luis Sepulveda, an assemblyman, and Ritchie Torres, a city councilman, argued the bill would have the broad support to pass the Democrat-dominated Assembly and Republican-controlled State Senate.

“I believe domestic violence survivors are being discriminated against because while they may be in a domestic violence shelter, that shelter isn’t considered a homeless shelter as far as the same category of the Housing Authority,” Mr. Klein said at a City Hall press conference today. “That’s ridiculous.”

Mr. Klein, who is sponsoring the legislation with Mr. Sepulveda, criticized the New York City Housing Authority for ranking domestic violence victims placed in shelters as a slightly lower priority for public housing than homeless families. NYCHA ranks the applicants on a “need-based” criteria from N-0 to N-8. Under his legislation, homeless families and domestic violence victims would have an equal ranking.

Mr. Torres, the chair of the Council’s public housing committee, released a report in October that showed domestic violence on the rise in public housing. There were 1,642 incidents in 2013, up from 809 in 2009, according to the report.

Echoing campaign rhetoric used by Mayor Bill de Blasio, Mr. Torres said there is now a “tale of two shelters” that must be rectified. 700 units are set aside each year for homeless families, Mr. Torres said, but none of those units are going toward people in domestic violence shelters.

Mr. Sepulveda said one motivation for pushing the legislation was his own experience with domestic violence: as a child, he witnessed attacks in his own home.

“Domestic violence is a disease in this city. I myself, when I grew up, saw domestic violence firsthand. It happened in my household,” Mr. Sepulveda said. “In my Assembly office, I can tell you that at least three out of ten people that come visit are women and children who are currently suffering from domestic violence.”

A spokesperson for NYCHA said the authority is working with the de Blasio administration to address the issues of homelessness and domestic violence, though no specific comment was offered on the legislation.

“Assisting domestic violence victims and helping house New York City’s many homeless families are both categorized as high priorities for the New York City Housing Authority in our computerized system used to fairly place residents in apartments,” the spokesperson said in a statement.

“While there are few vacancies in public housing, which has a turnover rate of only about 3 percent, public housing is just one facet of a comprehensive solution to these problems and NYCHA is working closely with others in the de Blasio administration to address these crises,” the spokesperson added.

A spokeswoman for Gov. Andrew Cuomo said he would be reviewing the legislation. 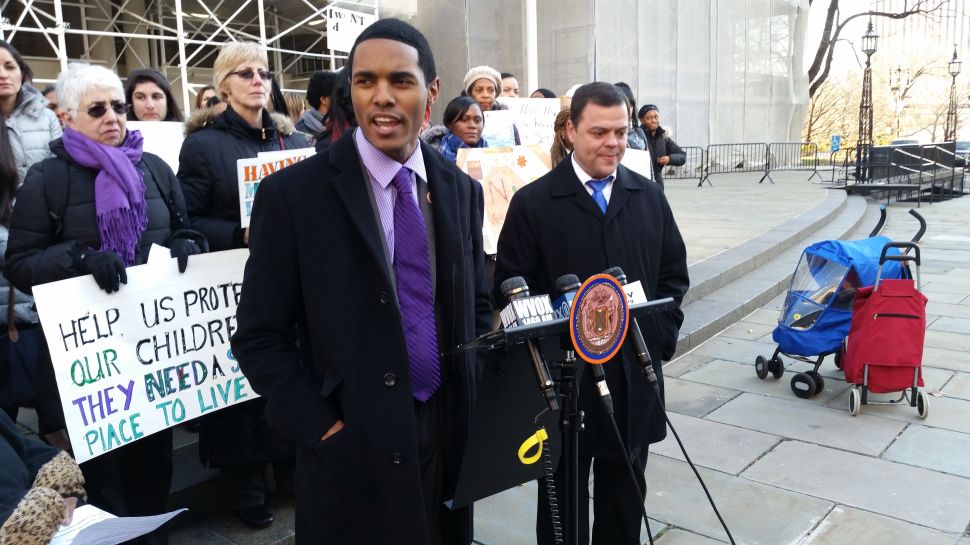