“It’s the best game board I’ve ever been able to play on,” the Turner Prize-winning art world superstar and self-proclaimed “old Scotsman alcoholic” Douglas Gordon said earlier this week of the massive Wade Thompson Drill Hall in The Park Avenue Armory. And as installation game boards go, there truly is none better in New York. At 55,000 square feet, it certainly offers a lot to play with, but it’s also a lot to fill.

Gordon’s latest collaborator, the dynamic and expressive French classical pianist Hélène Grimaud also acknowledged the challenges for her as a performer of sizing up the space, in her case to fill with notes from the keyboard during an eight piece program including -themed works by Liszt, Fauré, Ravel, Janáček and Debussy. In tears become…streams become, their art installation cum piano recital, which opened Tuesday night for a series of performances through December 21st, (the installation will be viewable daily  except for Mondays until January 4th), Gordon both succeeds and sticks a little. Grimaud, meanwhile, in a blazingly white track suit designed by Agnes B., makes excellent romantic use of being marooned at one of two Steinways, (a second is purported to be a player piano which will serenade daytime visitors).

The idea is a beguiling one: arrange the audience around four sides of a specially-built black floor that is then gurglingly flooded with an inch or two deep. Thereby is created a giant opaque mirror that can seem either as dark and mysterious as the River Styx or, when the arched ceiling of the Drill Hall with its metal-riveted spines is illuminated, a truly astounding doubling of the visual space. No longer a flat parade ground on which to play Napoleon and roll around rows of canon, the space seem to become more like some space-age docking center. One half expected the Millenium Falcon to whoosh in at any minute and park with a seven-foot Wookie yodeling at the controls.

Gordon’s ballsy vision, created with lighting designer Brian Scott, is of an already extraordinary interior transformed and opened up like a book to reveal an entirely new world of imagination and reflection within. And as such, it succeeds marvelously. Gordon has created a magical space for a concert in which to lose oneself in revery and association. The problem was that the doors to the space opened on the hour, the audience then sat, first conversing excitedly in full voice, then calming into whispers, then devolving into a testy silence over forty minutes later.

Whether due to technical delays or to enforce a meditative attention, the impatient among the audience made jokes a la The Beverly Hillbillies about “black gold, Texas tea” as the finally began to seep up through floor.  It had finally filled in all the little dry circles that remained and then the lights dimmed. The two ladies who lunch behind me were not amused or inspired by the wait. “It seems kind of contrived,” one said. “Our dinner reservations are going to be really, really, really, really late.” That’s a four “really” review. Not good.

The Armory’s President and Executive Director, Rebecca Robertson, is fond of saying, in reference to the unique opportunities afforded by the space, that the distinctions between performance and the fine arts, between all arts forms, are mattering less and less. That’s true, and in a good way. But I wondered once Grimaud began to play if the audience members from the art world were at a disadvantage to those who specifically came for the music and had developed the attention span for it. The program had a last minute insert with a revised set list, which had scalped an additional three works by Debussy off the evening and enlarged the estimated performance time from an hour to an hour and twenty minutes in length.

How much better, one wonders, could it have been if, instead of sloshing through the enormous puddle the long way from the main entrance doors, Grimaud has taken her place from dry land and begun her program? If then the waters had come, would it have created an antediluvian sense of suspense scored by sound and brought the audience along better through the journey? And one couldn’t help but wonder how marvelously the space and event would have suited the power of rock n’ roll.

As it was, Grimaud performed beautifully, finding deep and intelligent expression in the cascading impressionistic notes and unsettling tones of Takemitsu’s Rain Tree Sketch II – In Memoriam Olivier Messiaen and throwing out her right arm from her body and pulling in her left leg under the bench while muscularly poring over the keyboard for Albeniz’s Almeria from Iberia.

In all, even making some late for dinner, they pull off quite a coup de théâtre in spectacular style, Gordon in his way, by making us wait for it, and Grimaud in hers, challenging our hearts through our ears. 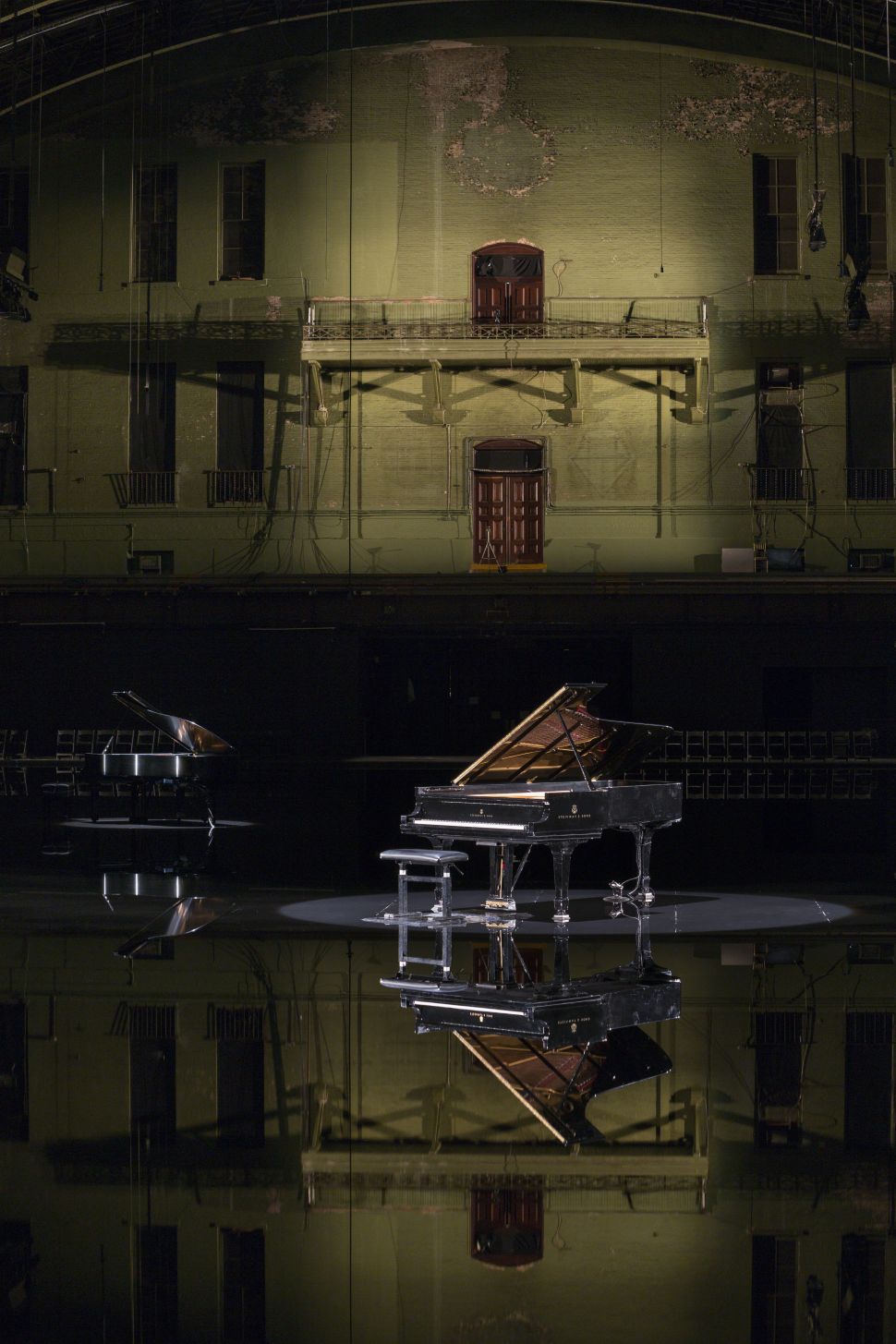