I would like to be very clear about one thing: I did not hate-watch last night’s Peter Pan Live!, NBC’s second annual family holiday musical theater spectacular, broadcast live (!) from Long Island’s Grumman Studios. Star Allison Williams, now living out her life-long dream of playing Peter Pan, specifically requested we open ourselves to the possibility of childlike wonder. “Peter Pan, you cannot watch cynically,” she told The Daily Beast. “If you do, you’re going to hate it, no question. It falls apart instantly.”

She is right. Luckily, I love musicals. If there is anything more overwhelmingly life-affirming, more fundamentally hopeful than costumed adults singing and dancing in unison, I would like to know about it. And indeed, Peter Pan Live! was spectacular, in that it was literally a spectacle.

Which is not to say that no one tries. If there is one thing that can be said for the NBC extravaganza, it is that everyone is trying. Everyone is trying so, so hard, in particular Allison Williams, who appears to be pulsing with the effort of delivering this performance. (To be fair to Ms. Williams, she is on wires the whole time, and singing. It seems difficult.)

And to be fair to show as a whole, there is no shortage of talent here. As Mrs. Darling, five-time Tony Award-nominee Kelli O’Hara is as excellent as it is possible for a Mrs. Darling to be. Taylor Louderman’s Wendy is, hands down, the emotional anchor of the show, even if her feelings for Williams’s oddly mild Peter Pan are largely incomprehensible. Broadway vet Christian Borle stands out as subservient pirate sidekick Smee, and Christopher Walken, as Captain Hook, is both a delightful presence and a reassuring one: when he is on stage, one momentarily forgets the slog that is the rest of the production. (Nana the dog, traditionally played by an actor in a dog suit but portrayed here by an actual dog, is also very convincing.)

But a handful of strong individual performances and a lot of adorable 30-something “Lost” “Boys” in lederhosen are not enough to overcome the production’s profound shapelessness.

For three hours, the plot marches forward with no particular emphasis: were you to graph it, you would have an infinite line going on forever, or at least until 11 o’clock, when the thing will be over by definition. The buffoonish pirates, who seem less like actual pirates and more like drag interpretations of pirates, are not so different from the brigade of “Lost Boys,” who appear to be neither lost nor boys. The climactic battle between the two camps feels less like a fight — or even a high-stakes dance-off — than it does like a middle school hallway between classes. Any hints of darkness or fear or texture or interest are staved off by the production’s decidedly cheerful monotony. There is nothing to do but contemplate the otherworldly whiteness of Allison Williams’ teeth.

In defense of director and choreographer Robert Ashford, the elements are working against him. For one thing, he is directing and choreographing Peter Pan, a musical with essentially no notable songs. (“I Won’t Grow Up,” perhaps, is the exception.) The cinematography isn’t doing the production any favors either, and what might the magic of big group numbers is often lost to ill-timed close-up shots. And then there are the endless commercial breaks, which only exacerbate the show’s pacing problems: on the rare occasions that the show does seem to be gathering real momentum — and it happens! — the spell is quickly broken by a plug for Walmart. On the other hand, if the spell can be broken by a Walmart ad, then doesn’t Peter Pan Live! need a stronger spell?

And yet, despite all that, it wouldn’t be right to call this year’s NBC musical-a-thon a failure. It isn’t that it succeeds at being good, exactly, but they succeed in making something that exists. I am glad it exists. I want it to continue to exist. If this year’s Peter Pan Live! was exponentially better than last year’s The Sound of Music Live!, then perhaps next year, we can have Something Else Live! , and it will be even closer to realizing the supreme potential of the NBC holiday all-American musical, and someday, NBC will produce a holiday musical so good that even after three hours I will be sad it is over. 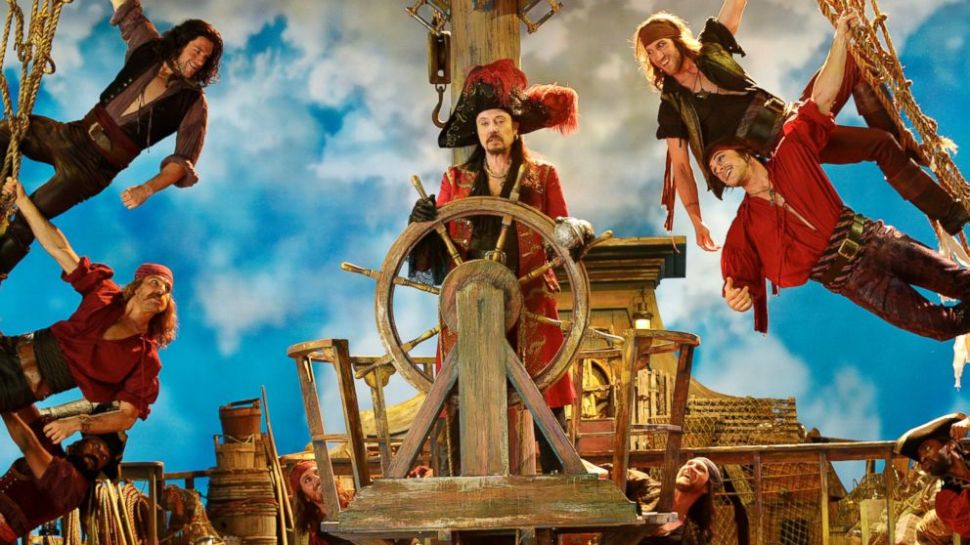