One of the most interesting things in the new Broadway revival of The Elephant Man is the way Bradley Cooper plays the pathetically deformed John Merrick. Horrifying photos of the real “elephant man” are projected from old daguerreotypes preserved from Victorian hospital archives, demonstrating all of the patient’s grotesqueries. Then you see the movie star, gym-buffed and camera-ready, clad only in a pair of shorts. Slowly, a curdling transformation takes place. The fingers gnarl, the mouth distorts into a silent cry of agony that looks like a facial expression in a George Grosz painting, the left leg subtly twists, shifting the weight to his right toes, and the body turns into a pretzel until nobody from Mr. Cooper’s ever-growing fan base will recognize their idol.


If you thought he could act in such films as Silver Linings Playbook and American Hustle, you haven’t experienced even a glimmer of what this fine actor can do. He creates more of an impact with mere body language than most film stars can project with the most elaborate and imaginative horror-movie makeup. I don’t know where he developed so much previously hidden talent. What he does in this version of the galvanizing 1977 play by Bernard Pomerance, directed by Scott Ellis, he didn’t learn on a Hollywood sound stage.

I first saw him do it two summers ago in Williamstown, where this production originated. We can all be grateful that he took the time out from a busy film schedule to bring it to Broadway for a fraction of the money he usually makes—and a limited run. Maybe more movie stars will follow. It’s an extraordinary venture, emphasizing the courage and compassion of a man labeled a freak because of his enormous head and elephant skin, rescued from the brutality and ridicule of street fairs and side shows by Dr. Fredrik Treves, who gave him a permanent home in the safety and privacy of London Hospital, where he was discovered to possess an unexpected intelligence, artistic nature, and gentle but winning personality. Merrick became a darling of society and a friend of royalty and the arts. But as his mind improved, his body failed. Merrick died in 1890, at age 28, after trying to sleep normally in a horizontal position where his head was too heavy to allow him to breathe through his nose.

When Mel Brooks produced the 1980 film version of this tragic story, directed by David Lynch, skeptics were alarmed by visions of cheap thrills, Hollywood horror and Lon Chaney masks from Phantom of the Opera. The predictions of failure were premature, and with John Hurt, Anthony Hopkins and Anne Bancroft in leading roles, the film became a classic. But I still believe The Elephant Man works better without special effects, and the stage presentation currently on view perfectly captures the stark decadence of Victorian London. Timothy Mackabee’s sterile set is in perfect sync with a time of poverty and ugliness. These are the years of Jack the Ripper, Dorian Gray, Sweeney Todd and penny dreadfuls, and John Merrick was another abused byproduct of a society that was just emerging from the Dark Ages into the light of the Industrial Revolution.

The play captures the Victorian Gothic elements without crude medieval medical laboratories, smelly wharfs and filthy slums. The flavor, fever and ferment of those turbulent times are reflected in the somber sets and costumes, and in the attitudes and prejudices of the characters. Dr. Treves is played with compassion by Alessandro Nivola, from the day he finds Merrick working as a freak attraction on the streets of Whitechapel, monstrously disfigured, reeking of a deplorable stench and covered with growths and scales, and suffering from an unknown disorder at first believed to be elephantiasis but later thought to be more directly related to abnormal bone development. The play covers the years Treves spent civilizing Merrick and opens the moral question of whether the patient was really helped in the humanizing process, or if was he indeed exploited on yet another higher level as a martyr of a society obsessed with reformation.

In the eyes of everyone who helped him, he became a mirror to their own vanity and weakness. Merrick found the affection, compassion and tenderness he needed, and when the governing committee of the hospital tried to turn him out as an “incurable,” even Queen Victoria and Princess Alexandria of Wales intervened on his behalf until, in the end, Merrick found his soul in the Samaritanism of others whose own motives remain questionable. It’s the Hunchback of Notre Dame theme, philosophically expanded, imaginatively rendered. In one of her wisest, wittiest and most sensitive performances, Patricia Clarkson is superb as the glamorous, respected stage actress whose initial curiosity about the elephant man leads to a sympathetic understanding that surpasses charity. Their relationship has a sexual undertone, and the excellent scene in which she removes her bodice to give Merrick his first look at a woman’s naked breasts leaves the audience so transfixed that even the coughers fell silent in awe.

It is here and throughout that Bradley Cooper’s talent for living in the moment comes to life, elevating The Elephant Man to unimagined heights of artistry. Once you get used to the grunts and distorted syntaxes that pass for speech, he makes the human being trapped behind the hideous face hugely real and three-dimensional. This is a bravura performance by a dazzling young actor eager to try new things, communicating more with his body and voice than most of his peers ever learn. Much craft and caution and dedication have gone into this production, turning a repellant and somewhat heart-wrenching story into a richly satisfying evening in the theater that will leave you devastated.

Truman Capote’s durable holiday sugar plum A Christmas Memory has become one of the most beautifully written classics of all time, discovered every December by new generations of children from 6 to 60 and adopted as a favorite literary classic. It now finds its way to the stage as a musical. I regret to inform all and sundry that the results are the messy theatrical equivalent of molasses—sweet, sticky and sometimes hard to swallow.

Based on reminiscences of Capote’s own childhood, when his divorced parents shipped him off to live with eccentric relatives in Monroeville, Ala., the treacly action involves the loving rapport between little Truman, called Buddy, and his favorite cousin—a shy, reclusive, simple-minded but good-hearted child-woman called Sook, whose one unimpeachable talent was baking fruitcakes. I will never forget the enchanting Geraldine Page as Sook in the magical film version directed by Frank Perry. In the overwrought, uneven new musical produced by the Irish Repertory Theatre in its temporary headquarters in Union Square, Sook is played by Alice Ripley, who is still beautiful, self-assured and anything but a back-road bumpkin no matter how they camouflage her in burlap sacks, sensible shoes and worn-out Sears catalogue kitchen aprons. She’s never less than polished and wonderful, especially when she opens her farmhouse window, sniffs the first cold day of an Alabama winter, and cries, “It’s fruitcake weather!”

But the show that surrounds her is clearly not in her league, and not always well served by the rest of the cast. Especially egregious is Brooklyn fifth grader Silvano Spagnuolo, the spongy, affected and poorly cast kid who plays Buddy. Singing off key, mumbling in a high-pitched voice that wobbles all over the place, and mugging outrageously in all the wrong places, his lyrics are so hard to follow that I thought for awhile I was listening to a girl.

This is a shame because while the premise founders (Buddy is all grown up now, played by Ashley Robinson, and a struggling writer in New York who makes a nostalgic voyage to Alabama and watches the action as it unfolds in the corners of his mind) the score by veteran composer Larry Grossman (Minnie’s Boys) and accomplished lyricist Carol Hall (Best Little Whorehouse in Texas) overflows with bonbons that sparkle like Christmas tree ornaments. The songs deserve a better showcase than this.

The show is extremely thin but not without joy. We watch Sook and Buddy make their rounds with a dog named Queenie that is much too well-groomed and well-bred to play the little terrier Capote wrote about, gathering raisins, pecans, canned pineapple, bootleg whiskey and other ingredients in a baby buggy to make 31 fruitcakes for friends, celebrities and other “valued associates” they admire from near and far, including movie stars, the postman and President Franklin D. Roosevelt. Decorating a crude tree with homemade ornaments constructed from colored construction paper, singing “They don’t make Christmas like that any more,” while stern relatives threaten Buddy with military school, A Christmas Memory exudes a simple country charm as plain as gingham. But it’s unevenly directed by Charlotte Moore, who should know that no proud, self-respecting, authentic Southerner has ever called a “pe-CON” a “pee-CAN” and survived. 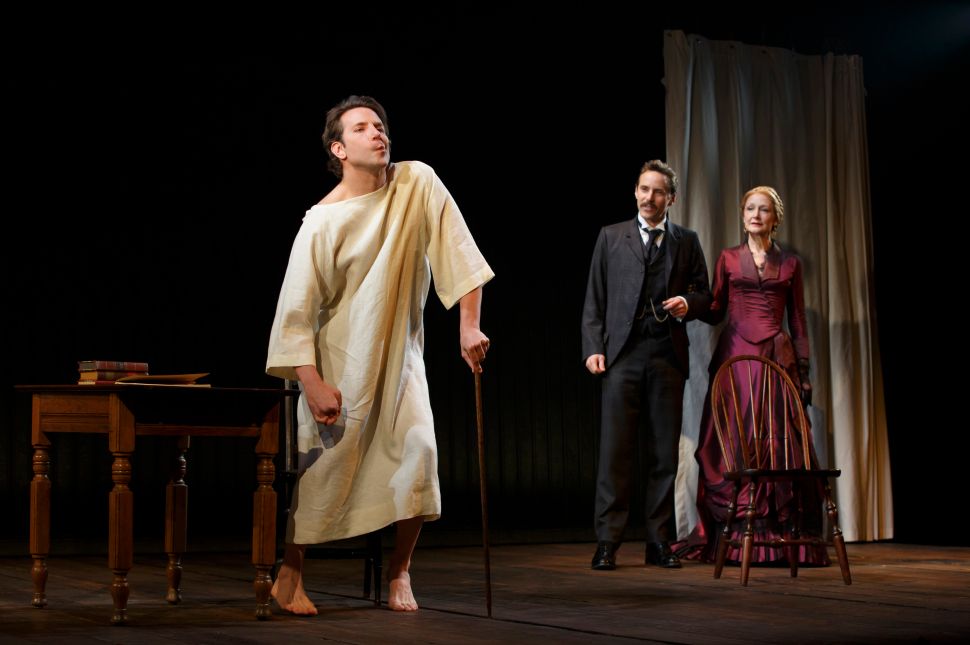