Who was the only person to play for the Brooklyn Dodgers, the Knicks and the Rangers in the same year?

I thought about that old, but still charming saw the other day when I was invited to a Rangers game at the new, $1 billion-improved Madison Square Garden. Although I had been The New York Times‘ hockey guy for many years, I had never actually sat in a luxury box before. I had seen, oh, six hundred hockey games (including the last one played at the old Garden in 1968, and the first one played at the new Garden). I had seen hockey in every state and Canadian province that had an N.H.L team, and at a bunch of Olympics.

But what I saw this time around wasn’t so much a hockey game as it was a noise-filled music concert on the rocks. I was stunned, perhaps as a purist, that New York hockey fans, of all people, need three periods of trumpeting, singing, and stats to keep them going.

Okay, I’ll grant the place is exciting, and if you’re lucky enough to have a buddy invite you to a private box—where they have terrific home-made potato chips, not to mention an unending supply of franks as well as your own TV—you are a happy member of the 1 percent.

And yes, it was interesting seeing the stats of the numbers of “hits”—body-slams that take a skater out of the play–on the big board. But what about the constant chanting, the music, the theatrical announcements? Why does the hockey fan, perhaps the most fervent aficionado of those who attend sports events, need caffeination? I say this especially about the New York hockey fan. I mean, this isn’t some town where you wait all week to let yourself go. It’s not Buffalo, or Anaheim or Toronto. It’s the Big Apple, for crying out loud—show it.

Hockey is the most visceral of games, the game that, I think, involves the fan more than any other with its noise of skates on ice, pucks hitting sticks, players being thumped into the boards. Fifty years ago, The Times sent me to cover a Rangers’ game. I had never even seen a hockey game before. But it grabbed me. I had never been at a sports event where the fans were so much a part of the action—close to it, cigarette smoke wafting over the skaters and the crowd, the organist getting the folks a little revved up by playing the “Charge!” And boy, were those players polite off the ice—every one of them a Canadian, deferential, earning all of $15,000 a year. The goalies smelled after they removed their horsehide protective padding. After the game, they put back in their teeth, which they had kept in paper cups on a shelf in their lockers. This was a new world, unlike the one I knew in Brooklyn, unlike the sports I knew in Brooklyn.

The old Garden was a steeply sloped arena, built in the 1920s when the zoning regulations were not as strict and walking down the steps was an adventure in keeping your balance. You felt as if you were in a cock-fighting arena with its claustrophobic ambience.

I saw the beginnings of the modern sports event symbolized through the years at the Garden. Ticket prices becoming elevated, players earning enough money to buy their own skates, hot dogs going from 60 cents to $6. There was the hiring in the 1960s of the whimsical organist, Eddie Layton, a man who had an electric train set in his Forest Hills, Queens, apartment. And when a referee’s call went against the Rangers, he’d play “Three Blind Mice.” When an opponent went to the penalty box, he’d riff on “If I Had The Wings of An Angel.” A puck sailed into the stands, caught by a lucky fan? Eddie would smile and play “Among My Souvenirs.” And, yes, he’d get the fans going at the start of a power play with some fight music.

But the game was the thing. The music never overshadowed what was happening. There was no exploding scoreboard. There were just fans, hockey fans, nutty fans, many of whom, I came to believe, would have been a menace to society if they didn’t have this outlet.

When this Garden opened in 1968, the highest-priced seats at Rangers’ games went for $7, the lowest for $2.50. Fans didn’t expect to be entertained between play stoppages. Is it the (really) high cost of today’s sports events that have created this need for nonstop cacophony? Or is something else happening—a societal need to have all our senses lathered, perhaps because we’re accustomed to staring at noisy screens, that a game can’t be played in silence on a computer or an Xbox with just our imagination, that all our senses must be fueled?”

I think it’s calamitous, what’s happened in the arena—but especially to this slippery game on ice, and I would love to see hockey played in an atmosphere of real people screaming and booing because they’re caught up in the game, not robots reacting to the music and the electronics and the shimmering lights. That’s so un-New York. Aren’t we a passionate enough people? 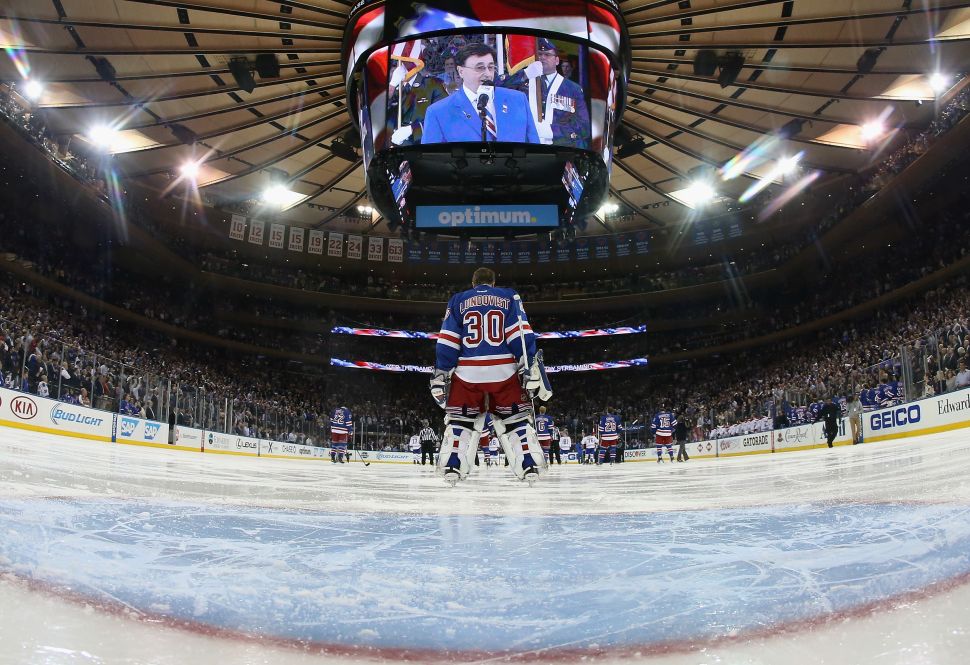