The wealthy have for a long time viewed art and real estate in a similar manner; investment vehicles to accumulate, show off, and increase fortunes. While there are many successful real estate moguls who buy and sell art, you do not often see the reverse, wealthy artists who invest in real estate. Nor are there many real estate millionaires who become very successful artists.

Yet, the Observer can exclusively reveal that the high-profile street artist Thierry Guetta—who goes by Mr. Brainwash, or MBW—is a very active purchaser of Los Angeles real estate. A few of the properties he owns can be found here.

Despite the many billions that flow into art purchases annually, conspicuous displays of capitalism by artists are frowned upon in the art world. Yet the fact that Mr. Brainwash has strong investments in real estate actually helps explain his commercial success in the art world. In 2014, as his artwork achieved unprecedented worldwide prominence, Guetta restructured his real estate holdings into a family trust, as the tax consultants to any good capitalist would advise.

At Art Basel earlier this month, MBW partied with the likes of Miley Cyrus and Eva Longoria. He made Page Six headlines for commenting that he wanted to move to New York City. Previously, in September 2014, Gothamist reported he plans to “take over a building in Soho, a full building of seven floors.”

As an entrepreneur who owns a few original Mr. Brainwash pieces, I wondered how he would be paying for this seven-story building  When I saw his documentary Exit Through The Giftshop, which was a Sundance hit and focused on marketing, celebrity and street art, I saw a 30-something year old European family man who was following street artists all over the world. He readily admitted that he didn’t know anything about art , and toward the end of the movie invented prices for his art as he went along (at one point laughing to the camera about it). All along, I thought, who is paying for this?  Travel is expensive, children are expensive, filming is expensive, but he made it seem effortless even before he made a name for himself.

Now, anyone can see that he clearly owns, at the very least, many millions in real estate holdings.  Now it all makes sense.

During the first major profile story written about him in 2008, immediately prior to his inaugural art exhibit entitled “Life Is Beautiful” in Los Angele— outrageous, both in the art and the expense of the show—, Mr. Brainwash did countless interviews. Unlike his mentor, the legendary Banksy, MBW is far from “reclusive.”  Despite this accessibility, back then, Brainwash would not “confirm rumors that he and his family own commercial real estate on Melrose.”

The home he and his family own on North Mansfield in North Hollywood has pretty fancy neighbors – including Disney corporate communications honcho Zenia Mucha. That address is also the registered headquarters for a number of Guetta and his family’s Limited Liability Companies.  It appears they own a number of other expensive properties around Los Angeles.  While another street artist has claimed that “Thierry is like a billionaire, a very wealthy guy….whose family bought a bunch of buildings up and down Melrose and some other really prime real estate in Los Angeles,” until now his real estate assets have not been confirmed. And I would wager he holds many more, most likely in LLC’s, as is common for real estate purchases, as regular readers of the Observer‘s Manhattan Transfers column can attest.

A representative for Mr. Brainwash—perhaps MBW himself?—responded to the Observer‘s inquiries obliquely: “I’d like to let you know that not only the public records are not updated to show the real status of property ownerships (therefore not correct), but also that your informations are not accurate.” The representative declined to go into detail but did confirm the home address; the Observer is not publishing the exact address.

In 2010, The Economist wrote of the “hyperactive Frenchman” that the art world is wondering if Mr. Brainwash is a “con or can do” as they commented that the relationship of “street art to the commercial world has always been a tricky one.” Brainwash has unabashedly made millions of dollars from art—despite the fact that he hires graphic designers to do most of the work in his name. He is brilliant at marketing and gimmicks, and in 2014 alone has had brand collaborations with Burger King, Coca-Cola, Hublot and more.  His work shows iconic images, including Mickey Mouse, Charlie Chaplin and Madonna, and uses fun, feel-good colors to create great-looking work.

I think his art is wonderful and display it in my home. Creative types are often self-important snobs who believe their social commentary carries greater validity than that of anyone else. The superficial arrogance that accompanies the hoity-toity art world may have finally met its match in Mr. Brainwash.  This savvy marketer seems to be standing up and saying “Shut up” to them all, as he declares that it is indeed all about the money.

For a while, some demurred and suggested that Mr. Guetta was an invention of Banksy, maybe Banksy himself; and Mr. Guetta never refuted it. All along, it has been very smart business and brilliant marketing. The Los Angeles Times quoted Brainwash as saying, “In the end, I became [Banksy’s] biggest work of art.”

Thierry Guetta has money and has used it to travel and chase his dreams.  Yet, had people known he was wealthy to begin with, he might never have made such an impact in the art world. Clearly, Mr. Brainwash is diversifying his financial investments, and winning the whole way. 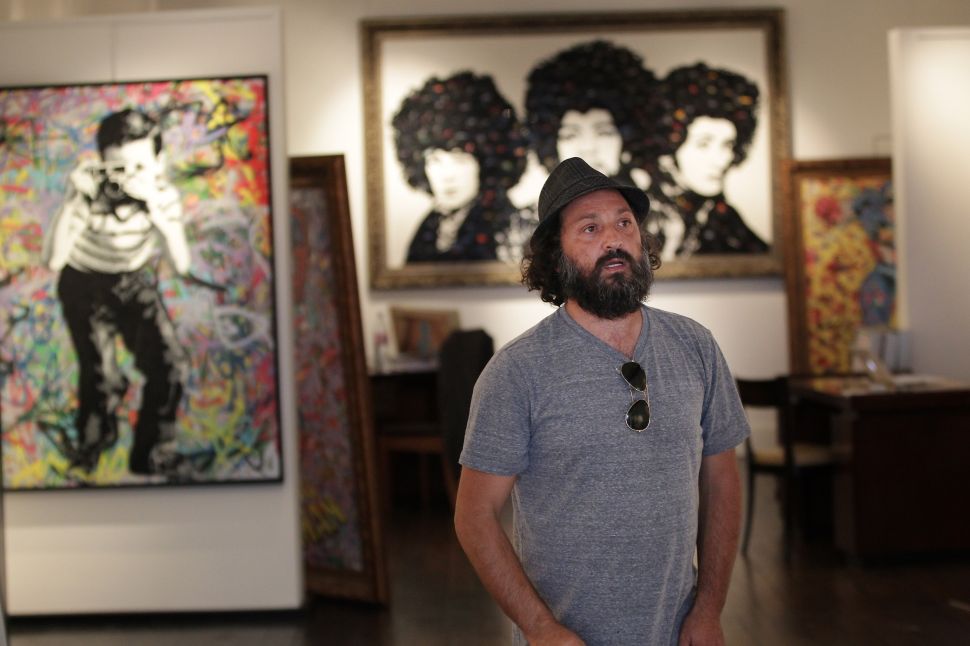