Once upon a time—literally, in The Magic Kingdom (the one at Disney World in Orlando)—there toiled a humble former New Jersey schoolteacher who had been reduced to teaching huckstering to theme-park attendants.

“I was a training coordinator in charge of ‘spieling attractions,’ ” Dennis T. Giacino explained. “Any attraction with a bit of a script, whether the Jungle Cruise or the Haunted House, I’d direct; and turn non-actors into actors.”

Two years of that left him thoroughly Disneyfied (but in a good way). Those creative juices are now on display at Theater at St. Clements—a ditzy delight called Disenchanted!

Ten storybook heroines from Disney’s animation plant parade about, and Hell hath no fury like a princess peeved. They tunefully complain of how they’re perceived, lugging their individually monogrammed baggage about in the form of 13 skit-songs, running a perverse reverse-gamut from “One More Happ’ly Ever After” to “Once Upon a Time.”

Correcting public perceptions of these ladies calls for a PMS-dose of Princess Lib, so the humor embedded in the fast-and-furious lyrics gets a bit bawdy at times for the G-rated marketplace. The show, written over a three-year period, aims wide. “One level is so the folks who don’t know Disney stuff can get it,” said the author. “If you’re a Disney buff, you’ll enjoy seeing an aggravated Snow White taking a little shot at the Frozen princess.”

Keeping him in check is director Fiely A. Matias. They met—it’s a small Disney World—when Mr. Matias was a street actor who would improvise shows for the customers at Epcot. “Fiely and I,” said Mr. Giacino, “created Disenchanted! I came up with the concept and wrote it—book, music, lyrics, structure—but he was always there. As a writer, I had this bouncing board—that person who sits there and you go, ‘So, what do you think about this?’ ”

They aren’t the only non-disgruntled Disney employees affiliated with Disenchanted! Producer Don Frantz was an associate producer on the Broadway Beauty and the Beast, and Matt West choreographed it. Set designer Gentry Akens, who’s responsible for the best-looking production St. Clements has seen in some time, worked on The Mickey Mouse Club, and costume designer Vanessa Lelick outfitted Disney on Ice. Even this Snow White, Michelle Knight of Jersey Boys on Broadway and on tour, did some time at one of the Finding Nemo park attractions.

Every princess has a complaint. With The Little Mermaid, it’s the sacrifices you make to be in a relationship (in her case, fins for legs). With Princess Badroulbadour from the Arabic folk tale (a.k.a. Princess Jasmine), it’s being second in her own film, Aladdin (“Why am I not first on the marquee?”). With Mulan, it’s why she is the only princess without a prince (“I might be a lesbian / I mean, I watch ESPN”).

“Part of the point is to say that these characters are interchangeable,” said Mr. Giacino. Their small wrists are smaller than their big saucer-like eyes. Pocahontas says at one point, ‘My waistline is smaller than your neck.’ ”

Soara-Joye Ross, from the Porgy and Bess tour, is the late-arriving African-American entry, playing The Princess Who Kissed the Frog. “She was Caucasian in the original story and African-African in the Disney film,” Mr. Giacino pointed out, “but, for a good two-thirds of that movie, she was green because she was a frog. I thought this would be a great chance for us to get into race and say, ‘I’m here, and I’m powerful, and I’m not going anywhere, and, by the way, I’m not going to be green, either.’ ”

Mr. Giacino saw Sleeping Beauty, who spends most of the show sleeping, as “the bull-in-the-china-shop who’d say, ‘You know what? This whole princess thing, I don’t get it.’ ”

Right at the outset, Snow White identifies the villain of the piece: “The Princess Complex”—this idea that women have to sit around and all look the same way and wait for their prince to come.

And, of course, none of them eats. “We wanted to poke fun at the idea that not only do you not see a princess eat, these princesses haven’t eaten for, like, 800 years.”

Belle, who is wheeled on stage in a straitjacket (probably for talking to inanimate objects), “holds the theme of the show,” according to Mr. Giacino, “and that is: ‘You took me out of my story and you put me in Hollywood. The way you took this nice piece of literature and turned me into this is driving me insane.’ ”

Snow White pretty much runs the show—as well she should, being the first Disney princess—but she wasn’t the starting point for Disenchanted! “It started with Pocahontas, to be honest,” he confessed in an accidental rhyme, a true lyricist. The 1995 animated feature brought out the dormant schoolteacher in him. “It just occurred to me, ‘Gee, I wonder what the real Pocahontas—that little 10-year-old rough-and-tumble Powhatan tomboy—would think of what she looks like onscreen in deer-pelt lingerie and long flowing hair?’ Why isn’t my story told honestly?’ ”

Disenchanted! answers that question. And how can you hate a show smart enough to rhyme “lesbian” with “ESPN”? 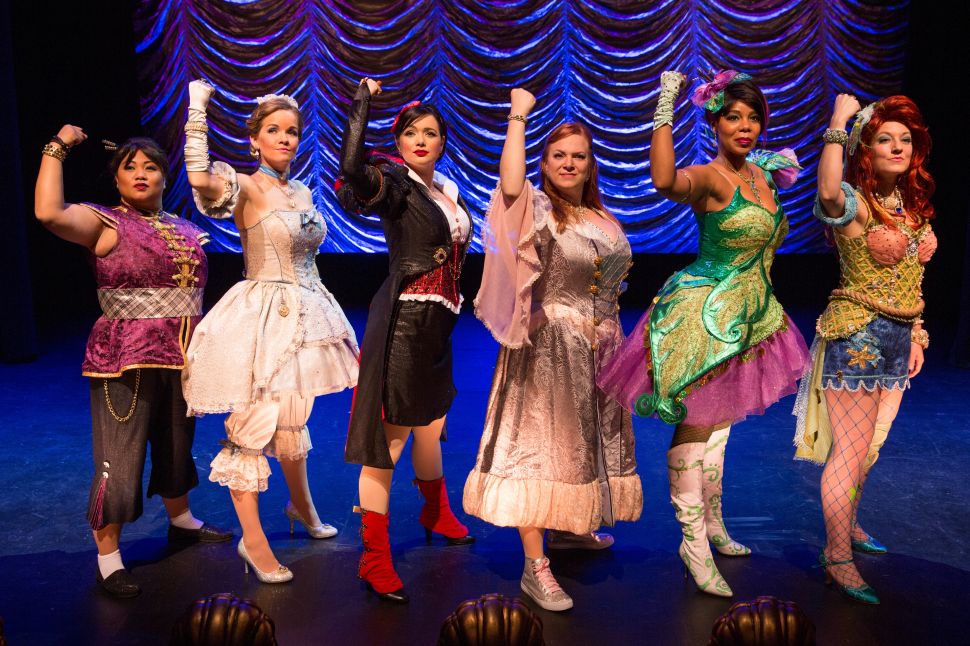