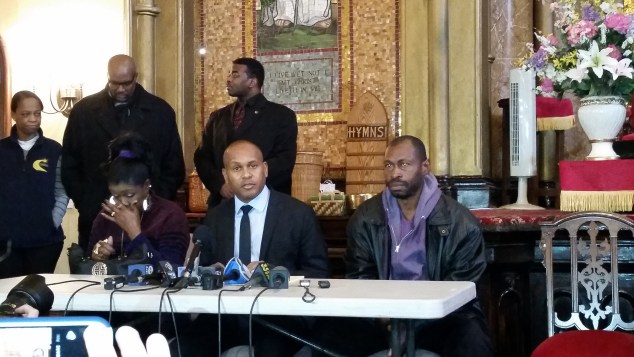 Kevin Powell, a spokesman for the parents of Akai Gurley, addresses reporters with the parents today. (Photo: Ross Barkan)

Two days after a Staten Island grand jury voted not to indict a white police officer in the death of Eric Garner, a spokesman for the family of Akai Gurley, a Brooklyn man shot and killed by a cop last month, called for the Brooklyn district attorney to charge the police officer with homicide.

“We want a full investigation into this situation from Mayor de Blasio and Police Commissioner Bill Bratton. We feel that the officer should be charged with homicide–we don’t believe this was just an accident,” said Kevin Powell, a spokesman for the family and an activist with the civil rights group BK Nation.

Referring to Garner, the black Staten Island man who died in police custody after he was placed in an apparent chokehold, Mr. Powell–speaking to reporters with the parents of Gurley at Brown Memorial Baptist Church in Brooklyn–compared a recent spate of fatal confrontations between police and people of color to a “series of modern day lynchings.”

“We believe that in our country that elected the first black, biracial, multicultural president of the United States in 2008, where you saw a cross section of people of all different races and cultures coming together, that these incidents need to stop. It should be unacceptable in our civilization, in our democracy,” he said.

The ornate church where the parents of Gurley briefly addressed the press was located in Clinton Hill, Brooklyn, not in East New York where Gurley, 28, died last month. The unarmed Gurley, walking in a dimly-lit stairwell of the Louis Pink Houses, was shot once by rookie cop Peter Liang and died shortly after. Mayor Bill de Blasio and Police Commissioner Bill Bratton called the shooting an “accident,” a characterization rejected by the Gurley family and local elected officials like Congressman Hakeem Jeffries and Assemblyman-elect Charles Barron.

Mr. de Blasio urged the public not to “connect the dots” between the Gurley death and other incidents, like the Garner case and the uproar in Ferguson, Mo. after a grand jury failed to indict a white police officer for shooting to death a black teenager. But the spokesman for the Gurley family was more than willing to do just that.

“My son was my life. There’s nothing in this world that can heal my pain and my heartache,” she said, her voice cracking. “I pray to God that I get justice for my son because my son didn’t deserve to die like that.”

Ms. Palmer said she was looking forward to spending Thanksgiving with her son and his 2-year-old daughter. “There will never be another Thanksgiving, another Christmas.”

“He hasn’t done nothing wrong,” she cried.

Kenneth Palmer, Gurley’s father, stood behind his seated wife and tried to console her.

“My son was the best son. My son was my sunshine and my wife’s sunshine,” he said.

Mr. Powell said he hoped Brooklyn District Attorney Kenneth Thompson, an African-American prosecutor who won election last year on a platform of police reform, would ultimately be able to bring charges against Mr. Liang. The U.S. Department of Justice is now investigating the Garner case after a grand jury failed to bring an indictment.

“We hope Mr. Thompson will do the right thing by this family,” he said.

A wake will be held for Gurley at the church tonight, Mr. Powell said. 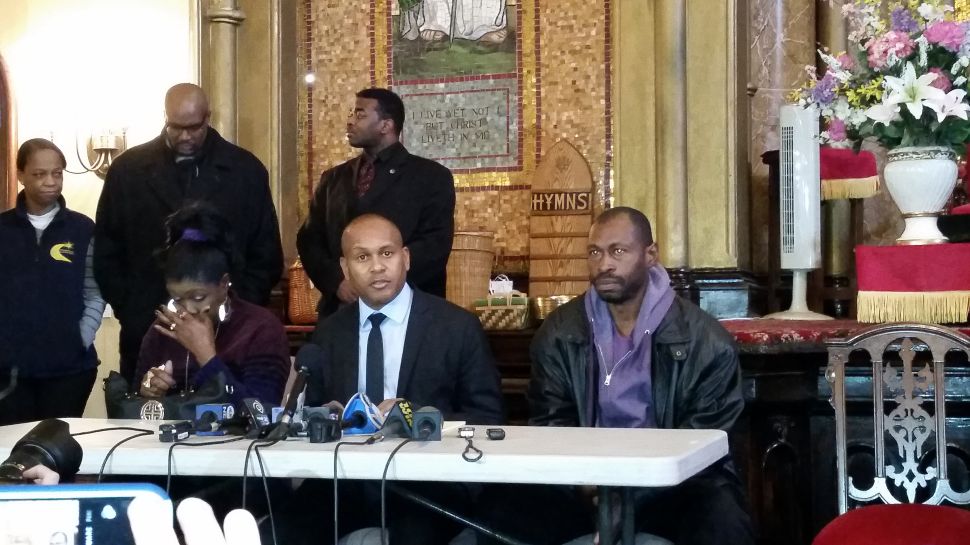