The 16th amendment to the Constitution was passed in 1913, authorizing the federal government to impose an income tax on the

American people and businesses. The amendment was hotly debated for years before it obtained the necessary support from states to be added the U.S. Constitution. The initial tax rates were from a low of 1% to no more than 7%. There was a generous personal exemption so only 2% of American families paid any federal income taxes.

In 1917 the United States entered World War I, which had been raging in Europe since 1914. To pay for the war expenditures the top income tax rate rose to 77% by 1918. Virtually all Americans were now subject to federal income tax to pay for the war.

In 1954, Frank Chodorov (pictured) wrote a blistering critique of the income tax, The Income Tax: Root of All Evil. In the short book, Chodorov makes the philosophical and economic case against income tax.

At the time of the book’s publication, the 1954 Code imposed a progressive tax with 24 income bracket applying to tax rates ranging from 20% to 91%. Due to deductions, exemptions, credits and other so-called loopholes, upper income individuals tended to pay about 30-39% of their adjusted gross income to the federal government.

Given that tax reform is now being discussed in Washington DC as one way to help stimulate economic activity and job creation, this documentary, The Income Tax: Root of all Evil? or Necessary Evil? (https://www.youtube.com/watch?v=rCH-OliQxsE&list=UUD9H00p53ehBY3Xjp6FUI4w), features several guests who discuss the Fair Tax (a national sales tax), a flat tax, and abolishing the income tax.

Murray Sabrin is professor of finance at Ramapo College. 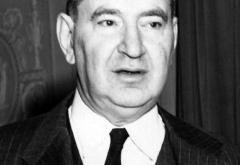