Joggers in South Beach stop daily at Collins Park to ask, “What are those strange creatures moving on the beach?” With Art Basel Miami Beach in full swing they should realize that the kinetic sculptures, which resemble giant crabs, are art.

Developed by Dutch physicist and artist Theo Jansen over the past 24 years, the Strandbeest (beach animals) are making their American debut on the Miami Beach oceanfront during the fair thanks to the collaboration between Swiss watchmaker Audemars Piguet and the Peabody Essex Museum in Massachusetts.

Made from yellow PVC tubing, the wind-powered creatures exist within the worlds of science and art, while flirting with issues of architecture and design. Like the mechanical devices that Leonardo di Vinci designed back in the 15th century, Jansen’s contraptions are both archaic and futuristic.

With a head full of wild white hair, the eccentric artist actually looks a bit like—and, at times, sounds like—the tinkering scientist played by actor Christopher Lloyd in the 1985 blockbuster movie “Back to the Future.”

“The real creator of life restricted himself to just using protein to make us and I restrict myself to making my creatures with this plastic tubing material, without motors or electronics,” Jansen told the Observer on the beach.

The beachside presentation features six of Jansen’s newest Strandbeests, including the debut of the 42-foot-long Animaris Suspendisse ; fossils from the artist’s past creations; an exhibition of photographs by Lena Herzog, who has been documenting Jansen’s activities over the past six years for a new Taschen book; and miniature, 3-D printed beests, ready for purchase.

“The Strandbeests multiply through a 3-D printer,” Jansen continued. “These animals are printed around the world so they are really reproducing. You can also combine those animals in a kind of sexual evolution, which is going out of hand ; and all of these people that are building these baby Strandbeests think they are having a good time, but in fact they used for the reproduction process.”

But why would a luxury watch manufacturer find this fascinating? “We always choose artists that have a link to what we do or where we do it in Vallee de Joux in the Swiss mountains,” shared Audemars Piguet CEO Francois-Henry Bennahmias in the company’s Collectors Lounges booth at the fair. “A watch can have up to six hundred parts that have to be assembled, which is very similar to what Jansen does. When I first met him I said, ‘You could be a watchmaker’ and he said, ‘I’m not good with my hands’—an ironic answer for someone who can create such amazing work.” 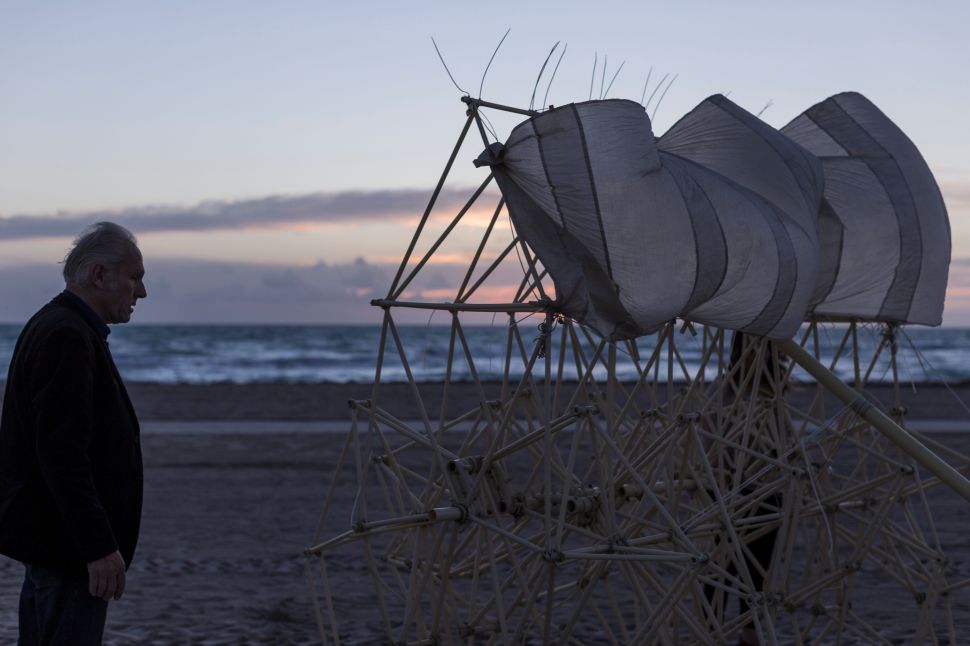