Former Mayor Rudolph Giuliani doubled-down on comments he made last week about the need to address the phenomenon of black-on-black crime, blaming “liberal guilty whites” like Mayor Bill de Blasio and teachers unions for exacerbating the problem.

Speaking on WABC’s Geraldo Rivera radio program, Mr. Giuliani reiterated his criticism of Mr. de Blasio and like-minded progressive politicians for what he claimed was an over-focus on police abuse and killing of blacks, and what he argued was insufficient attention to the high crime rates in African-American neighborhoods. He claimed the refusal to address the latter problem is making it worse.

“The only reason there are more [police] encounters with blacks is because there’s considerably more crimes against blacks. Somebody was on television this weekend, asking how come there are so many blacks in prison. Well, how about because they commit 70 percent of the murders in New York City. That’s not a racist comment, Geraldo. That’s a fact. I think it’s racist not to acknowledge that,” he said. “The only way you restore confidence between these two communities is to get them to tell the truth about each other.”

The former mayor argued that Mr. de Blasio and his ally Rev. Al Sharpton would be better off spending time and effort combating crime in black communities and the social problems that he claimed give rise to it.

“Liberal guilty whites have to stop refusing to say the bigger part of the problem here is black crime and not police overreaction. A smaller part of the problem is police overreaction. It’s driven by the incredibly large rates of crime in the black community,” Mr. Giuliani said.  “The energy that Sharpton and everybody else is spending protesting against police would save a lot more black lives if it would start talking about black education, if it started talking about the family situation in the black neighborhoods.”

He then turned his fire on teachers unions, claiming they are to blame for the problem of poor schools in black neighborhoods.

“Maybe all these left-wing politicians that want to blame police, maybe there’s some blame here that has to go to the teachers union, for refusing to have, for refusing to have schools where teachers are paid for performance, for fighting charter schools, for fighting vouchers, so we can drastically and dramatically improve the education situation. Maybe they should be talking about and holding rallies about the problem of black fathers taking care of the children they fathered,” he said.

Nonetheless, he conceded that police need retraining in courtesy, and that the continued troubles blacks face are a result of historic injustice.

“All of this I don’t see as racial. This is all a product of the terrible things that happened what someone called I think was the biggest sin in American history, was slavery,” Mr. Giuliani said. 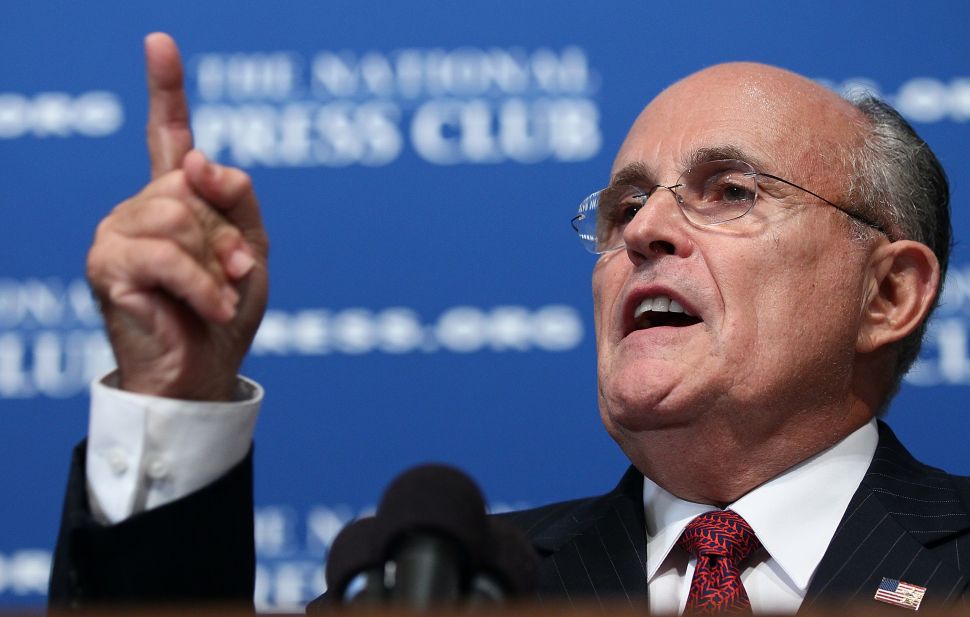