If you watched last night’s episode of Gracepoint and thought “Whaaaaaaat?” you are not alone. The penultimate episode of FOX’s crime drama mini series provided a few jaw dropping revelations from characters some of us (*cough* I) did not see coming. With only one episode until we finally learn who killed Danny Solano, I’ve made a few predictions about what the finale might hold (Though I’m not holding my breath because if the last nine episodes have taught me anything it’s that if you think you know who did it, you don’t so, stop guessing idiot.)

That being said, I’m straying from the path they led us down and focusing on Tom Miller. From the get-go we knew the twelve year old was a little weird–deleting computer files instead of crying when finding out your best friend has been murdered is unusual to say the least–but it seemed odd to suspect that a kid had something to do with the murder. And to be honest, it was easy to forget about Tom when characters like like Jack and Sarah were so distractingly filling the show’s creepy quota. But Tom has maintained a subtle, slow-burning eeriness and when you put all the pieces together–and the fact that he STRAIGHT UP threatened to blackmail the local priest in last night’s episode– there is no way he’s the little angel his mother thinks he is.

Speaking of his mother, Detective Miller is at her wit’s end. I’m exhausted just looking at her. This case has dragged on and on to no avail and the poor thing is tired. Lucky for us her exhaustion has made her noticeably more badass. (Badass Anna Gunn > Not Badass Anna Gunn) Now that her boss Detective Carver is off the case–or about to be–Ellie is forced to carry the weight of this investigation on her shoulders. Her newfound badass-ness was perhaps most clearly seen during the interrogation with Susan. (Threatening to kill the woman’s dog if she doesn’t talk?? Where did that come from?!) While it is immensely satisfying to see that she’s finally toughening up, the power–or maybe just the exhaustion–has totally gone to her head. After Susan confessed that her husband raped and murdered her oldest daughter, Ellie had a hard time believing that Susan was telling the truth when she claimed she had no idea this was going on. “How could you not know what was going on in your own home?” Ellie said judgmentally. “Your child, you husband?” **sniff sniff**That friends, is most certainly the smell of foreshadowing (*cough*Tom.) I’m practically polishing the silverware for the detective to eat her words.

While Ellie and Tom are noticeably “harder,” Detective Carver has become a bit of a softy. The usually grumpy detective’s heart condition has gotten the better of him and after passing out in last week’s episode, he’s been taken off the case. Frustrated that they’re no where near finding out who killed Danny Solano, he returns to work despite the fact that it will probably kill him. He was given one more day –sans firearm–to crack the case and though I don’t want to jump the gun, I have a feeling his character is to going to have some tragic heart attack, say something uncharacteristically profound and encouraging, and die just before they find out who the killer is.

UPDATE: Gracepoint’s most unsettling character, Susan, finally admitted why she’s been TOTALLY CREEPING US OUT ALL SEASON (You may recall I’ve been calling her Creepy Susan–even when we found out her name is Ruth–in recent weeks.) Perhaps it was because she was always scowling or maybe it was that it seemed like she was coming on to Vince–the twenty something plumber who works for Mark Solano– but she has been at the top of my list of suspects from the beginning. After being interrogated by Detective Miller in last night’s episode, Susan admitts that the cigarettes found by Danny’s body WERE HER’S but she didn’t kill him. Instead she found the boy’s body, stared at it for a while thinking it looked  “beautiful” (totes normal?) and then smoked three cigarettes before returning home. Sure, this behavior seems weird–ok, is weird–but it’s understandable since her daughter was murdered by the man she loved. “He looked beautiful and I wondered if my daughter looked like that when she died” Susan explained, “I’ll bet she didn’t.”

But Ellie wasn’t buying it. Having lived in Gracepoint her whole life, she knows one does not see a body on the beach from far away. She had to have a reason to go over there. We later find out the reason is because she saw Vince pull up to the shore in a small boat with a body.

QUESTION: Why would she go over to the scene of the crime?! Most people would run away and call the cops. ANSWER: A mother never abandons her children in tough times. YEP. That’s right. I said a MOTHER.

ALLEGEDLY, the reason Susan has been stalking Vince is because she’s convinced he’s the son that Child Protective Services took from her years ago. That’s why she always wants to talk to him and that’s why she changed her name. She wanted to be near her son, so she moved to his town and took up residence in a nearby trailer park to keep an eye on him.

Which brings us to Vince (Excuse me while I bang my head against the wall.) I believe I’ve gone so far as to say “it’s definitely not Vince” in previous weeks and at first, I still was’t convinced it was him (How could I be SO wrong??) But after the Solano’s find out Vince took Tom and Danny on hunting trips in the woods without anyone knowing AND that he has Danny’s name tattooed on his arm (for the un-caught up, Danny is Vince’s boss’s son so having a tattoo of his twelve year old on your arm is….beyond) it’s pretty clear that he’s guilty. Though he claims to have gotten the tattoo after his death (still weird, Bro) the detectives are not buying it and after Sarah finally admits she saw his van by the cliffs the night Danny was killed, it seems there’s no way it could be anyone else.

So my predictions: I think Tom is somehow involved with Vince. We still don’t know where Danny got that wad of cash from the first episode so maybe the two boys were working with Vince…somehow…(If this seems far fetched, refer back to the time I thought twelve year old Danny was a drug dealer.) I also think Ellie is going to be heartbroken when she realizes her son is #BadNewsBears and possibly quit her job. Carver’s going to die, Susan is going to leave town, and Vince will be charged with murder but admit he did it for someone else. Perhaps the backpacker? I’m not sure we’ve seen the last of that guy. There’s been a lot of references to the  vagrant backpacker this season so maybe, just maybe, he will swoop in and tie the whole thing together next week in one big OMG I CAN’T BELIEVE THIS IS HAPPENING conclusion. Hey, here’s hoping.

One more episode to go! 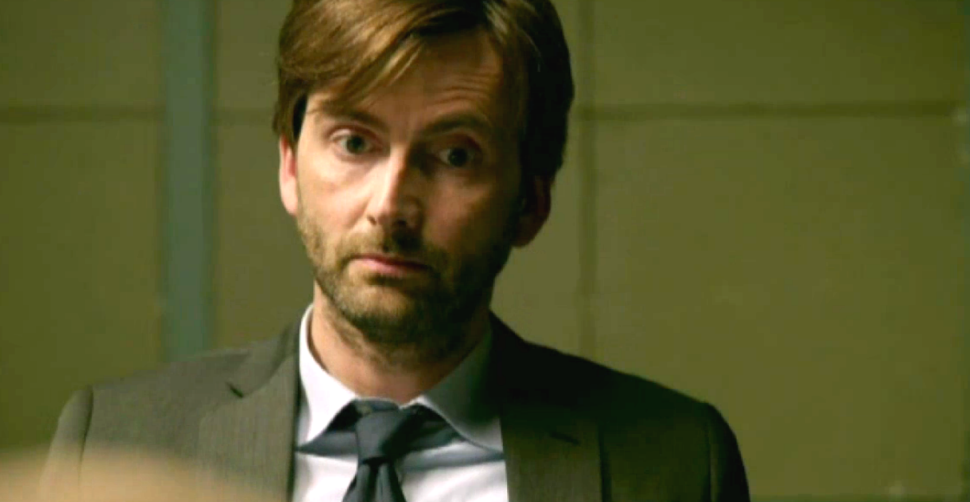