“I’m a good man,” Joe said after confessing he killed Danny Solano in last night’s Gracepoint finale. But the statement was a bit of a head-scratcher considering he also admitted to having a perverted crush on the twelve year old.

During the interrogation, Joe claimed the boy died after the two spent a few hours in the cliff-side cabin (which is why Danny’s blood was found there and why he is always shown dripping blood in the opening credits.) As he tells it, Danny ran outside, tripped, and hit his head on a rock. “It was an accident” Joe said plainly. But didn’t we all kind of know it couldn’t be that simple? After all, we only got this confession from Joe after he turned Danny’s phone back on, allowing the detectives to trace the device back to his garage. And though the dramatic “I can tell you everything” stare off between Joe and Carver made it seem like we were finally going to solve this episodes-long mystery, it all seemed a little too convenient.

I have to admit, up until half way through the episode I was feeling a bit let down that it was Joe. I mean really, another pedophile?? Didn’t the writers get that out of their system with Jack? Apparently not, or so it seemed. After all, he confessed to Detective Carver, then to his wife Ellie, and later to Danny’s father Mark, who had been his friend and neighbor for years. There were even flashbacks to prove Joe was the killer and all of our questions were being answered one by one.

1. In the first episode we learned that Danny was killed by “One blunt force to the head,” hence, rock.

2.  The wad of cash the detectives found in the first episode was also from him. It was cash to pay for the cell phone he gave Danny so he could call him whenever he wanted.

3.  Joe wears a size ten shoe, matching the prints found by the body on the beach.

Getting some answers kind of made up for the whole it’s Joe let down, until all at once I remembered Ellie’s judgmental words to Susan in last week’s episode: “How could you not know?”

“How could you not know” hovered over the rest of the episode as we realized there was even more Ellie didn’t know and by that point, I was sure I was picking up the message Gracepoint was laying down. Don’t be so judgmental…when you point your finger at someone there are four fingers pointing back at you…when you assume you make an ass out of– And at once it was clear that the whole show was laced with this message. Remember Jack? Or Reverend Paul? I was judging the daylights out them. And suddenly, I was consumed with remorse as Gracepoint showed me the error of my judgmental ways. Sort of…But I didn’t have too much time to be upset because in typical Gracepoint fashion, Ellie soon discovered the killer wasn’t her husband but her son Tom! Tom!?!? (There’s the jaw-dropper we were waiting for!)

In an attempt to keep his father away from his best friend, he swung –of all things–an oar and nailed Danny in the head. It was a bit of an OMG moment and explained why Joe confessed to the murder (and possibly why he thinks he’s a “good guy.”)

A part of me feels like I should have known Joe was a creep all along. Looking back, the writers focused on everyone in town except for him and I had all but forgotten about Joe except to mention how refreshing it was to see a woman work full time while her husband stays home with the kids. Though I do still wonder why Sarah admitted to seeing Vince’s car on the side of the road the night Danny was killed. Why include that? Is there more we don’t know?

The finale was left a little open ended–Carver discovered Tom was involved–but a second season seems unlikely due to less than stellar ratings over the last ten weeks. And so, it seems my months-long game of WhoDunIt is finally over, meaning it’s finally time to hang up that arm-chair-detective hat. Perhaps the original version of the show Broadchurch, can fill the void when it comes back for its second season next February. Until then! 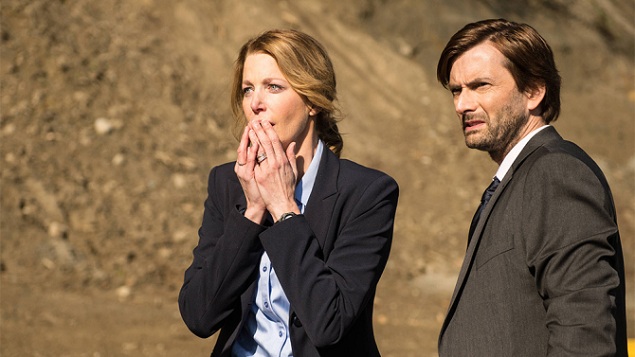