If you want to acculturate your kids to Puccini, Mozart, Verdi and Wagner, are the light comic operas of Gilbert & Sullivan a good gateway drug?

This was my question watching the New York Gilbert & Sullivan Players’ production of the English dramatic duo’s greatest hit, H.M.S. Pinafore that debuted 136 years ago and was performed for a week through New Year’s Eve at NYU’s Skirball Center for the Performing Arts as part of the company’s continuing 40th anniversary season. The season will round out in May with The Gondoliers which has that great choral number: “Dance a Cachucha, Fandango, Bolero” that was the first Gilbert & Sullivan song I ever heard and loved in, gulp, I admit it, middle school chorus.

If you wanted to introduce your kids to opera, Pinafore should be one of the best with which to give classical music a whirl. It’s got sailors and ships, (a terrific set showed a portion of the main and quarter deck with a mast rising up and neat rigging to climb), the action moves swiftly and adults look silly.

Or course, in ballet, “The Nutcracker” and “Sleeping Beauty” are crack for girls, but I wanted to see how Pinafore fared with the youth of today for whom texting is like breathing.

The kids I was surreptitiously watching ran the gamut of responses, it turned out. There were two ‘tween girls across the aisle from me who were in agonies of contortionist boredom from before it started until they rushed up the aisle as the curtain call was starting. Their body language, languid, yawning, eye rolling, was all “this is so stupid”.

Another eleven or twelve year old girl in front of me started out super-excited, she even “shh”‘d me as the lights were going down, but she got a major case of the fidgets halfway through.

But, God bless him, there was a little blond boy, who couldn’t have been more than five, sitting the middle of the front row, who was head-bopping and conducting and laughing to beat the band throughout the whole damn thing. And so, another Gilbert & Sullivan aficionado was born, destined to drive his family crazy on long drives for years to come. So, I guess there’s just no telling whose got the recessive gene.

Gilbert & Sullivan’s satiric H.M.S Pinafore, in which all the action takes place on the eponymous  British sailing ship, takes aim at class distinctions and puffery as indicated by christening one of Her Majesty’s Man o’ War, those stalwart monsters of the sea, with the name of a child’s lacy pull-on smock, the pinafore. The rub is that although clothes may make the man, they don’t necessarily keep him from being a fool.

The guys onstage were decked out with sailors in square-cut white pants and straw hats, and mincing bustled ladies with parasols.  NYGASP, (as the company is known), always has terrific costumes. The Rt. Hon. Sir Joseph Porter, K.C.B., the First Lord of the Admiralty, (played with delightful and confident aplomb by James Mills), takes pride in both his plumed hat and his willful ignorance of maritime ways:

Of legal knowledge I acquired such a grip
That they took me into the partnership.
And that junior partnership, I ween,
Was the only ship that I ever had seen.
But that kind of ship so suited me,
That now I am the Ruler of the Queen’s Navee!

He comes aboard the Pinafore to woo the pretty young daughter of Captain Corcoran, (the droll and spirited David Auxier, as lean and tall as a knife with gold-fringed epaulettes), but Josephine, (Kate Bass with a lovely clear soprano), has her heart set, she tells him, on  “a humble sailor aboard your own ship!” That “tar who sails the ,” Ralph Rackstraw, is double cast with tenors Cameron Smith, the evening I saw, and Daniel Greenwood, sharing the duties.

Under the direction as well as the baton of Founder and Artistic Director Allen Bergeret — his shiny bald head arising out of the pit and bopping in time just like the little boy’s — the musicians and the cast jump into things in an infectious spirit of enthused fun, if not always as crisply as one could hope. In supporting roles, NYGASP veterans excel: David Wannen as the Bo’sun, Louis Dall’Ava as an old salt and Angela Christine Smith as the cheery “bumboat woman” Little Buttercup who sells supplies to the sailors while also providing the outlandish bit of backstory that brings things to a happy and swift conclusion.

A Man o’ War decked out in a pinafore can’t be expected to sail with its full dignity, and, similarly, the professional production values of the G&S Players sometimes belie a looseness in direction and acting with more concern given over to the infectious silliness of it all. For the record, just about all the adults in the audience had clearly caught the bug early and had a toe-tapping blast. 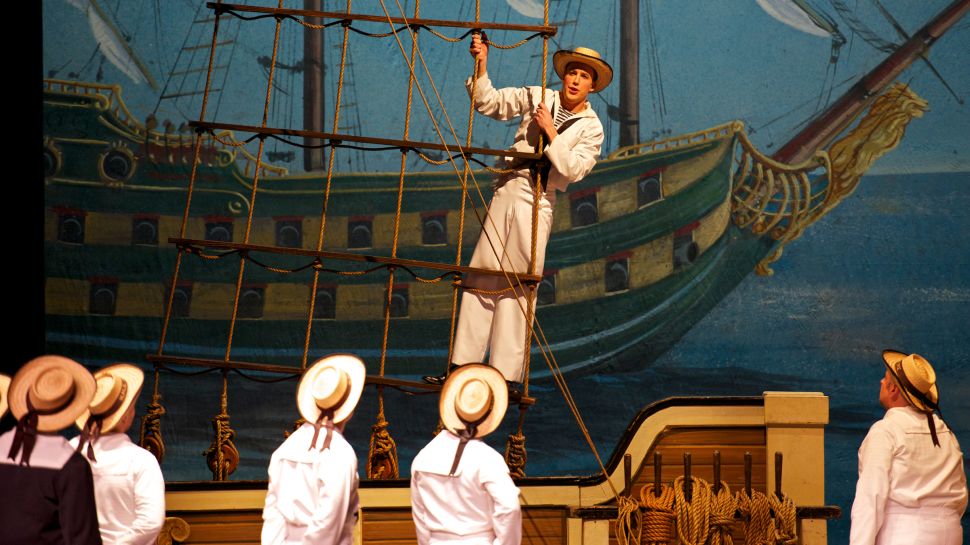