Redmond’s dead! Just when I was starting to like that guy. Well that’s got to be the worst of it right? You start off the episode with an important character blown up in an RPG attack, there can’t be too much more blood shed. Did I mention I’m terrible at predictions? At least Saul and Carrie are OK. Quinn doesn’t even ask about Redmond when he radios the Marines to come back to the embassy. Unfortunately the Marine he calls gets shot by a sniper before he can tell his troops that Haqqani’s attacking the embassy.

Khan is supposed to be one of the good guys, but when Carrie, under a hail of sniper fire, calls him to ask him to send support, he ends up stalling before calling in his troops just on Nasneem’s say so. What a dick. Nasneem tells him how stupid he his for being nice to Americans, and so he waits ten long minutes to call in help. In that time Saul and Carrie manage to stay alive but more Marines get killed. Haqqani is able to run around the embassy killing and stealing top secret info, specifically the list of CIA informants in Pakistan.

Haqqani and his gang come into the embassy, guns blasting. They kill a lot of agents whose names we don’t know so who cares. Oh no, not Hensleigh. I liked him too. Hensleigh gets shot protecting Lockhart whom he sends off to the vault with the list of Pakistani CIA assets Haqqani’s surely looking to steal.

This doesn’t do much good because some agent trembling in fear ends up giving the list’s location to Haqqani. It’s in the vault, you idiot. Haqqani knows the whole layout of the embassy thanks to Dennis Boyd. Where else would the list be? Maybe Haqqani enjoys the theatrics.

Lockhart, Martha, Dennis and some others are safely locked up in the vault but Haqqani gets Lockhart to open the door. Lockheart is just a big softy after all. He talks a tough game but you kill three people on a video monitor in front of him and hold knife to Fara’s throat, he’ll break. He even shoves Martha Boyd out of the way to open the door. Martha knows Haqqani’s going to kill Fara anyway but she’s not the best judge of character. Now Fara’s dead too. Come on, this is getting ridiculous.

The beast has awoken. The killing machine that is Quinn has been quiet for the past few episodes but he’s back. He, along with his young Private Marine sidekick, are able to take on Haqqani and his men, driving them out of the embassy. Not in time to save Fara’s life but the rest of the hostages and Lockhart are alive because badass Quinn has returned. While Quinn manages to shoot Haqqani in the leg, he still gets away with the asset list.

Dennis finally wants to do the right thing and kill himself. I was hoping for Denny to get beaten to death by Quinn but no such luck. Not sure why it took Martha so long to give him the belt he requested in his cell. I guess it was the for same reason she stayed married to the loser. Martha just can’t let go. It’s gotta be difficult to knowingly provide a noose to the man you once loved and raised a child with. It’s even more disturbing to see that the cowardly worm didn’t go through with it. Somebody kill Dennis Boyd!

It’s not over. Quinn is interrogating Saul like he’s in the Taliban, in efforts to pull from him any information on where Haqqani might be but Saul can’t remember much. The embassy is being evacuated. The President is cutting off diplomatic ties with Pakistan. Haqqani is under the protection of the Pakistani government. Quinn decides to sneak away from the embassy and go it alone.

You really messed up now, Haqqani because you just pissed off Quinn, who doesn’t give a gosh darn about diplomatic relations. He’s coming for you. No way Haqqani’s making it out of this season alive. 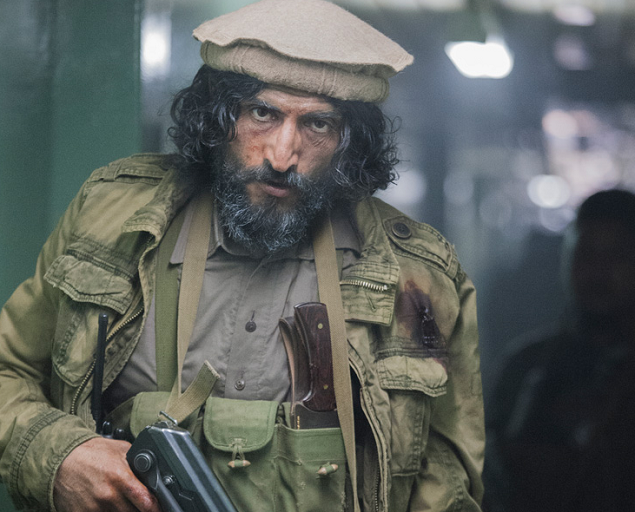