Rompers for dudes are cool, but we’re now officially with a new addition to the world of crowdfunded fashion.

Prepare to be amazed by the Undress, a garment that bills itself as “the world’s first fashionable and functional mobile changing room.” The duo who created it set out to raise $22,000 on Kickstarter; on November 1, they completed the campaign with a total of $615,663.

We were skeptical, at first, of the Undress. To the untrained eye, it looks like a standard maxi dress—what was so revolutionary, we wondered, about offering women the change to change their pants under the veil of a long skirt?

But the Undress is so much more than that. Using an ingenious hook-and-bungee-cord contraption that seems to defy the laws of physics, the dress allows you to change your clothes—including swapping a sports bra for a regular bra—without actually exposing yourself to innocent passersby. Watch this video to see the Undress in action:

Creators April Estrada and Dennis Caco created the Undress with active women in mind—particularly those who do outdoor activities, and have to decide between staying in their sweaty clothes, or changing in public.

“Ask yourself this: Have you recently been forced to change clothes in public?” they wrote on Kickstarter. “Have you tried changing behind a flimsy towel, in a dirty public restroom, the backseat of a car, or worse?  Perhaps before or after a workout? We have the perfect solution for you.”

In a recent update posted to the Kickstarter page, Ms. Estrada and Mr. Caco said the dresses—which are still being manufactured—would hopefully be shipped in January to Kickstarter backers and those who placed pre-orders on the product’s site. The Undress is no longer taking pre-orders, but eager customers are invited to join a waiting list.

You know, we’re considering actually doing stuff outside just so we can put one of these to use. 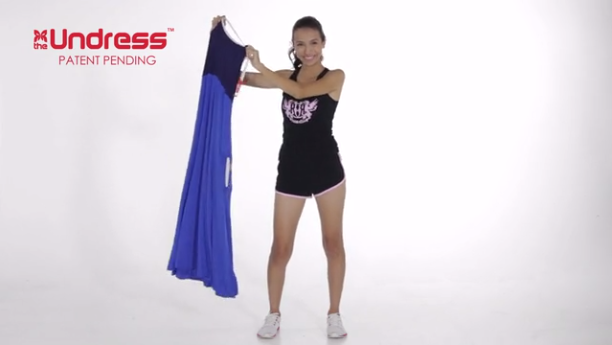