As 2014 winds down, it is clear that Russian President Vladimir Putin’s has been one of the most important figures on the global stage. In the first months of the year, Mr. Putin saw Viktor Yanukovych, the pro-Russia President of Ukraine, ousted by largely peaceful demonstrators. When a new more progressive interim government took office, things did not look good for Mr. Putin. But the Russian leader, many would argue dictator, recovered from that setback, sending Russian troops to the Crimea, retaking that region and stirring nationalism. Following that annexation of part of Ukraine, Mr. Putin supported and created instability in other parts of eastern and southern Ukraine through a separatist campaign that threatened, but appears to have failed, to all but destroy the Ukrainian state. During the middle of 2014, when this was occurring, Mr. Putin seemed powerful, in control and strategically one step ahead of the West.

Unfortunately for Mr. Putin, the year did not end well. The last few months of 2014 saw the election of a solidly pro-West parliament in Ukraine and efforts by the Ukraine to move forward despite Russian aggression. Additionally, EU and U.S. sanctions on Russia, coupled with the steep decline in the price of oil, led to an economic downturn and a collapse of the value of the Ruble.

If 2014 has been a year of dramatic changes in fortune for Mr. Putin, it has seen even bigger shifts in his standing outside Russia. Over the course of the year he went from being seen as a strong leader who was outsmarting the U.S and Europe, to being a modern-day Adolf Hitler wantonly grabbing lands from neighboring countries to being on the precipice of losing power.

In a March interview, former New York City Mayor Rudolph Giuliani praised Mr. Putin: “[H]e makes a decision and he executes it, quickly. And then everybody reacts. That’s what you call a leader.” Mr. Giuliani was far from the only prominent American to publicly laud Mr. Putin’s leadership skills. “Obama, the perception of him and his ‘potency’ across the world is one of such weakness,” said Sarah Palin. Conversely, “People are looking at Putin as one who wrestles bears and drills for oil. They look at our president as one who wears mom jeans.”

Following the Russian invasion of Crimea, however, Hitler analogies dominated western perceptions of Mr. Putin. Among those making that comparison were British Prime Minister David Cameron, former Secretary of State Hillary Clinton, Paul Johnson writing for Forbes, and Senator John McCain (R-AZ). Most of these comparisons focused on Hitler’s brutal policies towards Germany’s neighbors in the late 1930s, rather than genocide and mass murder, but a Hitler comparison is always made with the deliberate aim of making the target seem as evil and dangerous. Gradually the Hitler meme faded away; and in recent days the media has been filled with stories about how the Russian economy is in collapse and Putin may not last in power much longer.

Mr. Putin cannot both be Hitler and so weak that a rise in global oil prices threatens his regime. Similarly, he cannot simultaneously both pose a Hitler-like threat yet be unable to maintain his grip on power due to a currency devaluation. The narratives about Mr. Putin that dominated 2014 are thus mutually exclusive, but they are also individually suspect. Also, the pattern of not noticing a problem for too long, then overstating its danger, often through false analogies, and then declaring imminent victory, is relatively widespread, and rarely useful.

Mr. Putin, who remains popular at home, is an authoritarian, a kleptocrat and a the leader of a still-powerful country who demonstrates little respect for the sovereignty of his neighbors. He is not, however, Hitler. Russia raises problems for Ukraine, Georgia and other countries in the region, but Mr. Putin does not seem to have serious global ambitions and has not violated human rights and committed mass murder on a scale comparable to Hitler. Similarly, although Russia is facing economically difficult times now, it is way too early to assume this will lead to Mr. Putin’s ouster.

For more than a decade, Mr. Putin has proven himself a tough and resilient, if nasty and undemocratic leader. There is little reason to assume that the latest crisis will push him from power. Just like there was little reason to think he was really a threat to the U.S. comparable to Hitler after he invaded Crimea. 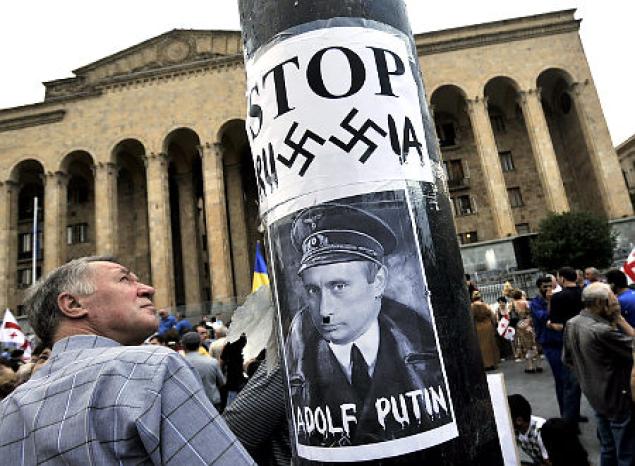