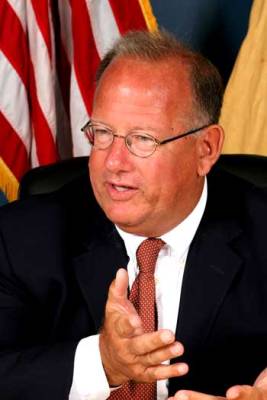 Lambertville Mayor Dave DelVecchio is another potential candidate who says he’s seriously considering a bid in LD15, which constitutes parts of Hunterdon and Mercer counties. A January or February Democratic convention is set to be held to select Watson Coleman’s successor — and, with a host of potential candidates and conflicting interests at the county leadership level, could turn out to be one of the more intriguing contests of 2015 legislative politics.

“I’m certainly looking at it,” DelVecchio told PolitickerNJ today about his plans to run.

A veteran Democratic strategist who served under former Gov. Jim Florio, DelVecchio is in his seventh term as mayor of Lambertville. He’s served as president of the New Jersey League of Municipalities and president of the New Jersey Conference of Mayors, and was recently named Mayor of the Year by DARE New Jersey in recognition of Lambertville’s anti-drug education efforts. He also considered running for the state Assembly after his town was put in a Democratic-friendly district during the last redistricting in 2011.

DelVecchio said this experience sets him apart from other Democrats currently being weighed as potential LD15 candidates, which include Mercer County Democratic Chair Liz Muoio, who has yet to declare an official bid but who many assume leads a shortlist of candidate names in the pipeline for Watson Coleman’s seat, as well as Mercer County Freeholder Sam Frisby, who has formed an exploratory committee to evaluate a potential campaign in the district.

“I know how government works,” DelVecchio added. “I’ve been an effective mayor of Lambertville, and I come to this with different experiences, having work under the Florio administration. I’ve served at the state level, at the county level in Essex County, and as an elected official at the local level, and I feel I come prepared as an effective and experienced leader.”

While he himself said that he “hasn’t done anything official” yet to explore or gauge support for a run in the district, insiders note that he’d likely carry Hunterdon County’s delegates at the convention, who tend to vote as a bloc. That might further accentuate a dogfight between Frisby and Muoio, who find themselves at the head of separate support structures — Frisby with Trenton Mayor Eric Jackson and Muoio with Mercer County Executive Brian Hughes.

Still, DelVecchio said it’s too early for him to make a definitive decision one way or the other.

“It all depends on who’s in the race in the end,” he said.

He also said he was unsure whether he’d be willing to give up his post as mayor of Lambertville, which he called a “success story” in New Jersey, for another office. He noted that the city was recently rated the second most friendly town for LGBTQ issues in the state, and one of the prettiest towns in the country by Forbes Magazine last year.

“That’s something I really have to think about,” he said.

Other Mercer County figures that have expressed interest in the post includes PBA Local 105 president Lance Lopez, Sr, who has also launched an exploratory committee to gauge support for a run, as well as Mercer County Freeholder Lucy Walters. 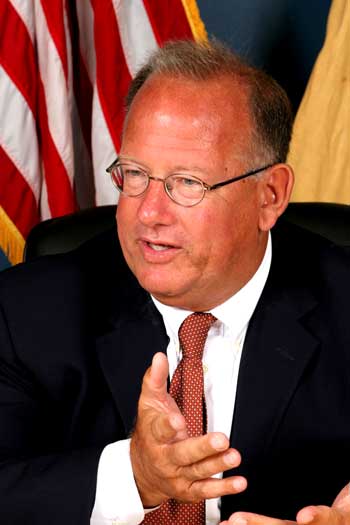