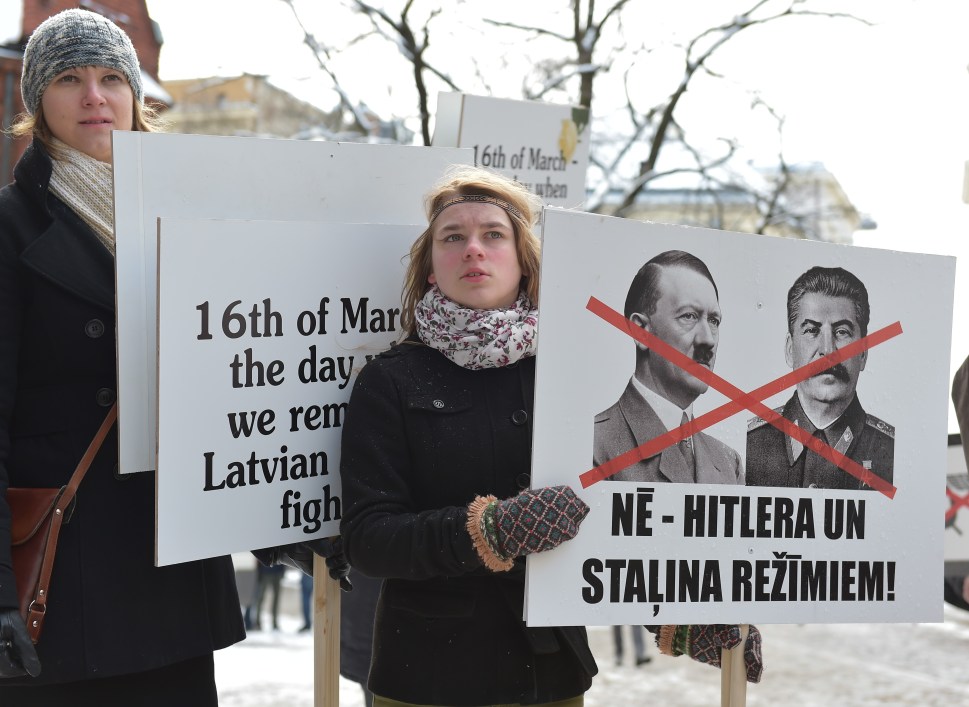 In Riga, a woman holds a placard reading “No to Hitler and Stalin regimes” on March 16, 2014 to protest against the annual march of veterans of the Latvian Legion, a force that was part of the Nazi Waffen SS. (ILMARS ZNOTINS/AFP/Getty Images)

Less than a month ago the Latvian foreign minister Edgars Rinkevics became the first high-ranking politician in his country—indeed, in all the Baltic states—to come out publicly as gay. In a tweet dated November 6, he wrote, “I proudly announce I am gay… Good luck all of you.” Four days ago, British Charge d`Affaires to Latvia Iain Frew also divulged his sexual orientation during an interview to the Latvian Radio-4 station. 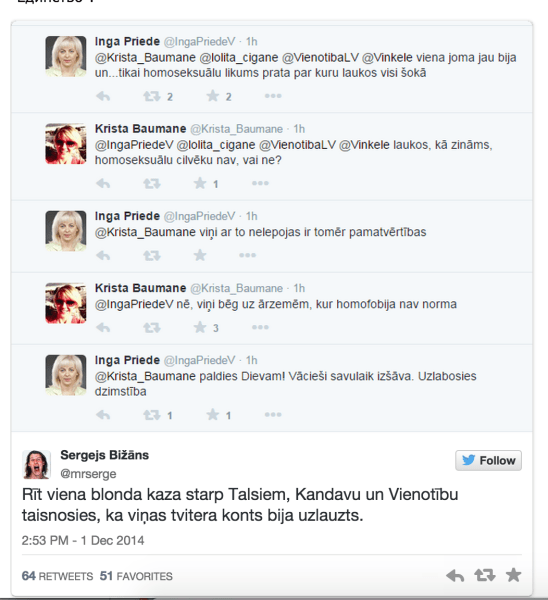 Now, considering the attitudes of some of their countrymen, it’s good luck that they need.

Earlier today, the Unity, Latvia’s largest center-right party and part of the coalition government, found itself in the middle of a storm caused by the hateful words by its member Inga Priede, the head of Unity’s department in Kandava Region and Kandava Region Council deputy, directed toward Latvian gays on her Twitter feed last night.

In a stunning series of tweets that have thus far gone unreported by the Western media, Ms. Priede went on line to discuss with her fellow Union party members the issue of the possible legislation of same-sex partnerships. According to an Observer-commissioned translation Ms. Priede explained her position on legislation saying that Latvian villagers are “in shock” after learning of the coming changes in the law and that countryside gays “are not proud” of their sexual orientation “because there are basic values.” Then, she went on tweeting, “Thank God! The Germans shot them in their time. Birth rate was going up.” The RT translated it somewhat differently, concluding that Ms. Priede had tweeted “Thank God Nazis shot gays” but the message is abundantly clear in any language.

After first denying that she had posted the offensive tweets, Ms. Priede deleted her original tweet, and stepped down from her position in the party leadership and later—as is traditional in such cases—apologized. 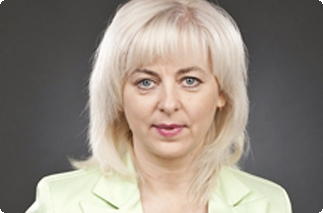 Her colleague MP Ilze Viņķele, a former Latvian social minister was cited by Mig news website chastising Ms. Priede: “Such statements are absolutely unacceptable. And her later attempts to say she didn’t write these criminal things or that she had been misunderstood prove that Ms. Priede is not a brave person and does not take responsibility for her words.”

Latvia’s painful past—including a wide-spread network of extermination camps on its territory during WWII, where more than 70,000 Latvian Jews, 2,000 Gypsies and an unknown number of homosexuals perished in the Holocaust with the help from Latvian collaborators—is still haunting this small country.  To this day, every year on March 16, former veterans of the Latvian Waffen-SS proudly parade on the streets of Riga, Latvia’s capital.

As far as the demographics of this nation of 2 million are concerned, Latvia lost about 13% of its population since the year 2000 and the prognosis by the United States Census Bureau estimates that by the year 2050 Latvia will lose another 500,000.

But it looks as though it’s not Latvian gays who are to blame for making the country so unhospitable. 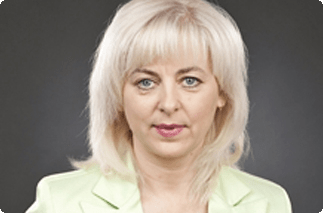