Marilyn Minter has long been creating hyperrealistic paintings of the female body, from lipsticked lips to high-heeled feet, in tight, cropped compositions full of decadent color and provocative sexual implications. Now, her focus is turned toward a part of the female body that remains somewhat taboo for the 21st-century: female pubic hair.

The New York artist has teamed up with Fulton Ryder, the book shop and publishing company helmed by artist Richard Prince. Ms. Minter’s book, titled Plush, is an up-close examination of the au naturel, unshaved crotch—think an updated take on Courbet’s L’Origine du monde, and with a distinctly female gaze—through a series of new photographs and paintings.

The book will be released in a limited run of 500 copies, with 10 deluxe editions, this week in Miami to coincide with the festivities for Art Basel Miami Beach. You can pick up a copy of Plush at the Fulton Ryder Bungalow at the Miami Beach Edition Hotel from December 3 through 6.

The Observer reached out to Ms. Minter, and Fulton Ryder director Fabiola Alondra to ask about creating an artist’s book, teaming with Richard Prince, and the visual power of the female “bush.” Here’s what they had to say.

How long have you been working on the book?

What inspired the book’s subject matter and imagery?

MM: I started shooting pubic hair for a project initiated by Neville Wakefield who at one point was editing a new magazine that for various reasons never came to fruition, the idea was to create beautiful images of pubic hair, a subject matter that seems to be disappearing from popular discourse. We asked model’s of all races, all colors to grow out their pubic hair and I got inspired to make photos and paintings from some of those images, and I’m still shooting them.

How did the collaboration with Fulton Ryder come about?

MM: Richard and I met thru twitter! He started following me and re-tweeting my posts. Of course, I already followed him as he is such an art world game changer and I was flattered. Richard and I met in person at a party and he introduced me to Fabiola Alondra the director of Fulton Ryder and she said let’s make a book! Fabiola and Jane Harmon, Richard’s assistant came to the studio and saw the bush images being worked on in the studio. Fabiola said immediately this is our book!

She went to RP, showed him the work and told him we should publish a ” bush book.” He liked her idea and loved the work too, and told her to go ahead and make it.

How did you settle on the title?

MM: Fabiola came up with the title and wrote this about it:

PLUSH. The word itself is lush in its sound and the images and feelings it provokes are charged with power. The term dates back to the 16th-century French word Pluche & Peluche, a smooth or shaggy/hairy fabric. In the 19th-century, plush was used as term to refer to pubic hair.

Why an artist’s book, and why now?

Fabiola Alondra: Long overdue! Art and Books are inseparable. Artists should always make books. There is no better time than now.

In 2014, PLUSH is Marilyn Minter’s first artist’s book. In an increasingly conservative art world, publishing and releasing PLUSH seems apropos. Minter’s photographs of a woman’s bush are direct and unapologetic. It is beautiful and confrontational. A feminist manifesto that enlightens through the image alone. The mastery of Minter’s work is that it is fearless and this is evident with PLUSH.

Did the final format of the artist’s book change your process for making the work at all, or make you conscious of new things in the studio?

MM: Since I wasn’t editing for a magazine anymore, just myself, I ended up changing the whole project and it grew much larger and more fun…Now we have a couple of 8 foot paintings of bush going in the studio and an art book. 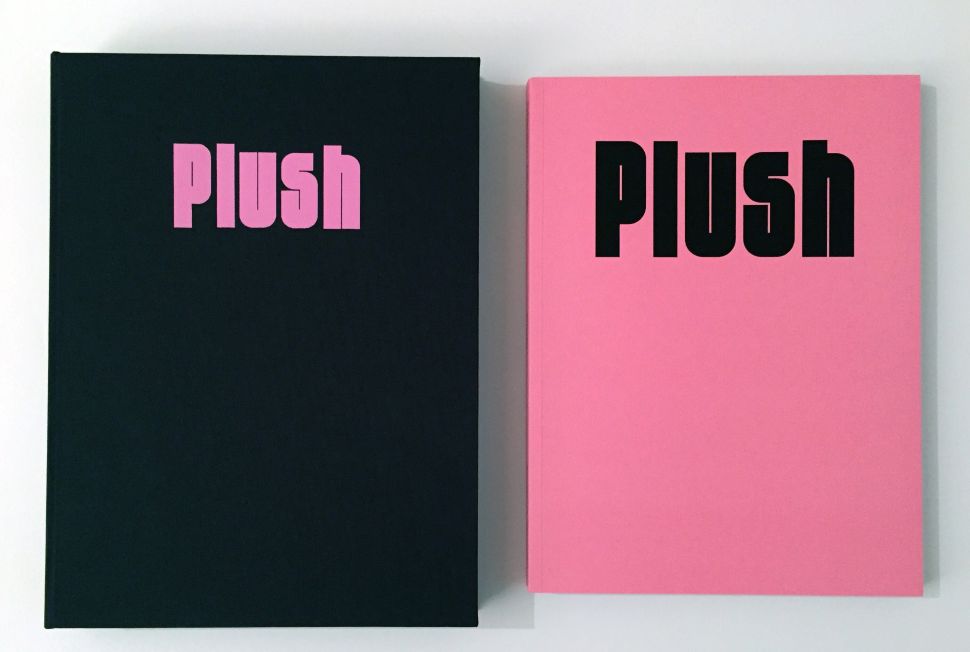