Rudolph Giuliani, the former Republican mayor, continued his war against Mayor Bill de Blasio last night, accusing the liberal Democrat of letting ideology get in the way of taking a fair approach to policing and race relations.

“When you escape reality, I’m afraid that’s the person who may be the racist,” Mr. Giuliani told conservative Fox News host Sean Hannity. “What this indicates to me is that the mayor has a hard time getting past his ideology. His ideology tells him, ‘Police are bad, they cause the problems, I have to warn my son about the police.'”

“Well, there’s maybe a one percent chance, maybe less, maybe a two percent chance that any black young boy is going to be shot by the police,” Mr. Giuliani continued. “There’s a 95 percent they’ll be shot by another black.”

Unlike Mr. de Blasio’s predecessor, the Republican-turned-independent Michael Bloomberg, Mr. Giuliani has been a very outspoken critic of Mr. de Blasio’s tenure. After a Staten Island grand jury failed to indict a white police officer in the death of Eric Garner, Mr. Giuliani, known for his aggressive reduction of crime and the tension his policies sometimes caused in minority neighborhoods, has criticized Mr. de Blasio for highlighting the frayed relationship between the NYPD and communities of color while not focusing on the crime committed within the black community.

Earlier yesterday, Mr. Giuliani raged that Mr. de Blasio was one of many “liberal guilty whites” who “have to stop refusing to say the bigger part of the problem here is black crime and not police overreaction.” Mr. de Blasio, in response to the barrage of criticism Mr. Giuliani has fired his way, said in a recent televised interview that Mr. Giuliani “fundamentally misunderstands reality.”

“I really make it a point not to respond to comments like that,” Mr. de Blasio told the Observer at an unrelated Gracie Mansion press conference yesterday. “The facts are just so clear. There is a stark problem in this country. We have to come to grips with it, and we have to deal with it.”

Rather than critique the justice system or police force, Mr. Giuliani said Mr. de Blasio should focus on charter schools and school vouchers as a way to uplift communities of color.

“If you look at my eight years in office, I saved more black lives than any mayor in the history of the city,” Mr. Giuliani claimed. 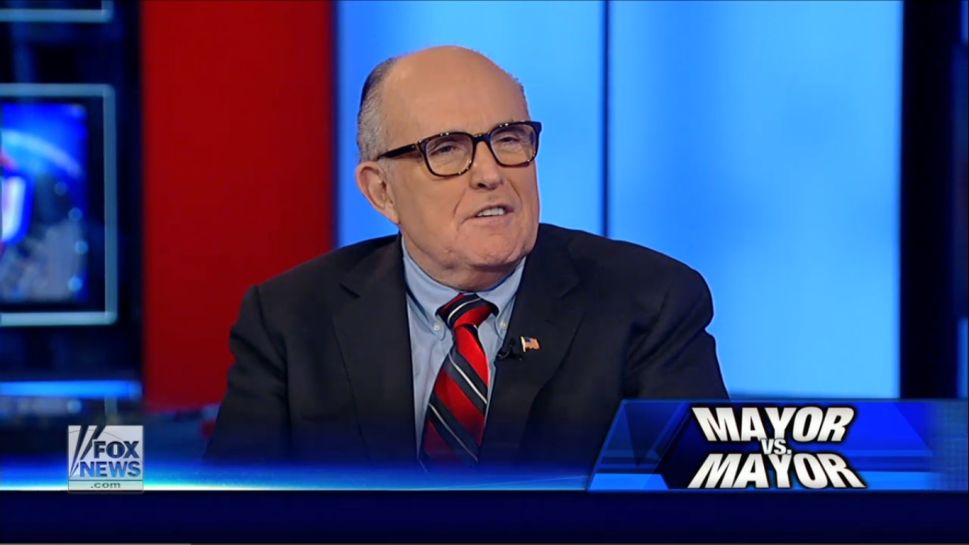