Like the way A.L.S. is revealed and examined without buckets of tears in The Theory of Everything, Julianne Moore, in the heartbreaking Still Alice, follows the arc of a devastating illness without pulling out the stops and torturing you with self-pity. This time the disease is the mysterious Alzheimer’s, and thanks to this brave and gutsy actress’ overwhelming candor and sincerity, you go away feeling educated, enlightened and more compassionate than you can possibly imagine.

The always startling actress is no stranger to forays into the dark side, but this time she’s as real and as normal as inhaling playing Dr. Alice Howland, a 50-year-old distinguished professor of linguistics at Columbia, a well adjusted, happily married professional with a successful husband and three grown children. When she is diagnosed with early-onset Alzheimer’s after her mind goes blank in the middle of a guest lecture at UCLA, she’s shocked, then shattered. She’s too young for this. Alzheimer’s is a disease for senior citizens, right? Her blood tests are fine, but her memory losses are worrying and the profile fits. Determined to continue her research and lifestyle uninterrupted, with the full support of her husband (Alec Baldwin, in one of his more sensitive and totally natural performances) and family, Alice eschews the terror of what lies ahead and embraces logic and common sense.

Gradually, subtle changes do creep in, she loses her sense of direction during a routine jog through Central Park, forgets her keys, can’t find the bathroom in her own house. Secretly she stores up pills for the inevitable time when her condition gets hopeless. Every study of Alzheimer’s is different, but the saddest aspect of her particular case is that Alice has always been a woman defined by words, and suddenly she can’t remember any.

The more the affliction increases, the more engrossing the film becomes. Coping becomes the function of a once privileged and orderly life, and panic sets in over something as simple as tying a shoelace or misplacing a cell phone. Alice’s cloudless marriage is put to the test like an examination final, her job is terminated, and her children react in touching and disturbing ways, especially when they all discover her rare form of the disease can be passed on genetically and her married daughter is having a baby. Struggling to hold on to what’s left of herself, live in the moment, hold onto her sense of humor and still stay connected to the facts without losing control of the Alice she has always known becomes an unexpected daily goal.

Ms. Moore shares her journey with boundless generosity. She makes you feel what it’s like to lose the wind beneath your wings. The talented writing-directing team of Richard Glatzer and Wash Westmoreland, who last year guided Kevin Kline through one of his greatest roles in the sturdy, fascinating and underrated Errol Flynn biopic The Last of Robin Hood, have a special rapport with actors. The effects of Alzheimer’s have been explored before, most notably by Julie Christie, Gena Rowlands, Joanne Woodward and Mia Farrow. The radiant Ms. Moore proves their equal. In the end, the two directors have extracted a nuanced and sensitively embroidered performance that is inventive without the slightest hint of contrivance. Through immeasurable loss, she shows how life can be sustained if we can only learn the value of negotiating our priorities and weighing our limitations until love is all that matters. It’s a hell of a lesson in one hell of a motion picture. 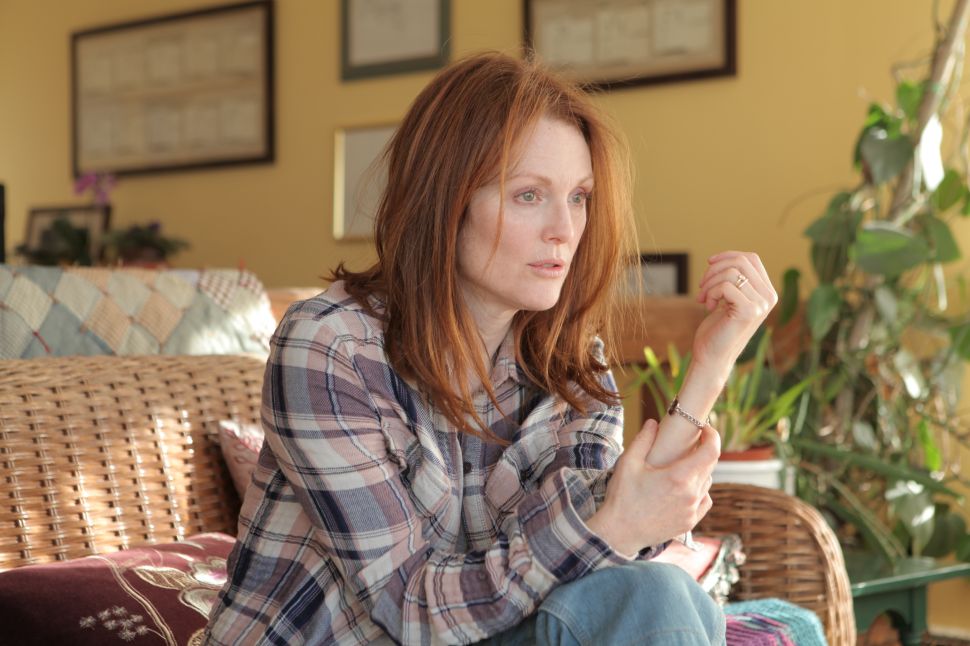