Congressman Michael Grimm pleaded guilty today to a single count of felony tax evasion—but said he will not resign his seat representing Staten Island and southern Brooklyn in the House of Representatives.

“As I said before, as long as I’m able to serve, I’m going to serve. As of right now I’m still in a capacity to serve,” Mr. Grimm said.

The Republican congressman was set to go to trial in February on a 20-count indictment alleging he paid workers off the books, underpaid his taxes, and committed perjury in the course of running an Upper East Side restaurant dubbed “Healthalicious.” In an agreement reached with federal prosecutors, Mr. Grimm pleaded guilty to just one count of that indictment, evading taxes, and Judge Pamela Chen accepted his guilty plea.

Mr. Grimm will not be sentenced until June 8. He can be sentenced to 33 months in prison and to pay $200,000 in restitution without being able to appeal the sentence, Judge Chen told Mr. Grimm in court today.

“There is no way to know what your ultimate sentence will be. Do you understand that?” Judge Chen asked.

“I do, your honor,” Mr. Grimm said in the courthouse.

The plea agreement reached between the prosecution and Mr. Grimm has yet to be made available by the court, so it is difficult to know whether Mr. Grimm is likely to face prison time—though even with a plea agreement, it is Judge Chen will ultimately be the one to sentence the congressman.

In court, prosecutors argued the sentencing guidelines for Mr. Grimm ought to call for between 24 to 30 months in prison. The defense argued it should call for 12 to 18 months. Again, Judge Chen reminded Mr. Grimm both estimates could be incorrect, and that in some cases she could disregard the guidelines in her sentencing.

Mr. Grimm’s plea required him to say in court how he had broken the law, and he told the judge he had underreported the gross receipts of his restaurant and had used them to pay some expenses and to pay employees “off-the-books.”

“Although it was a little restaurant, I made some big mistakes,” Mr. Grimm added outside the courthouse. “Mistakes that I immensely, immensely regret, and that I am truly sorry for, but that I also accept full responsibility for all of those mistakes in every way. And as difficult as it is and it’s difficult to admit when you’re wrong, I was. I underreported the gross sales receipts of the restaurant to pay business expenses, including payroll for employees who were off the books. It’s true.”

In a statement of facts he signed along with his plea, Mr. Grimm admitted to keep two different sets of records—the restaurants true payroll, and one for the government. He also admitted to lying about not knowing if employees were paid in cash during a 2013 deposition in a civil suit—which happened while he was a congressman—though he did not plead guilty to the count of perjury the government had brought against him for that lie.

Mr. Grimm sailed to re-election in November, beating challenger Domenic Recchia by a huge margin and winning the endorsements of his local newspaper, The Staten Island Advance, and the Daily News. In its endorsement, the Advance called on Mr. Grimm to resign if convicted—which he said today he has no intention of doing.

“Absolutely not,” he said, when asked whether taking responsibility meant stepping down. “Everything we’re talking about here happened before I was in Congress and for the last four years, I’ve been a very effective, very strong member of Congress, that I’ve served the people of Staten Island very well, and I think the proof of that is the will of the people,” Mr. Grimm said.

When running for re-election—in a race that became something of a national laughingstock—Mr. Grimm often declared that he would beat the charges, or that the government was on a witch hunt in charging him. Mr. Grimm, who sought to dismiss the charges on the basis that he was being selectively and vindictively prosecuted, dodged the question of whether he still felt it was a witch hunt.

Mr. Grimm can continue to serve in the House despite the felony conviction—even if he is sentenced to prison time. He would not offer any specifics of conversations he may have had with House Speaker John Bohner, saying only that he’d spoken to “leadership.”

His colleagues have the option of stripping him of his ability to vote and could also to vote to expel him from Congress, something that has not happened since 2002. 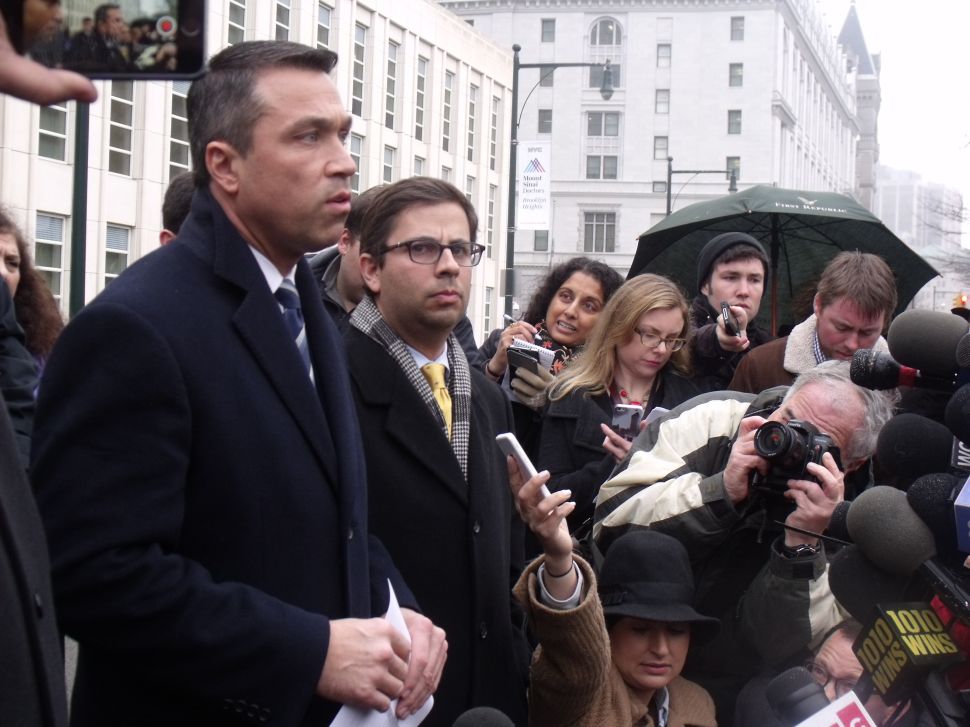