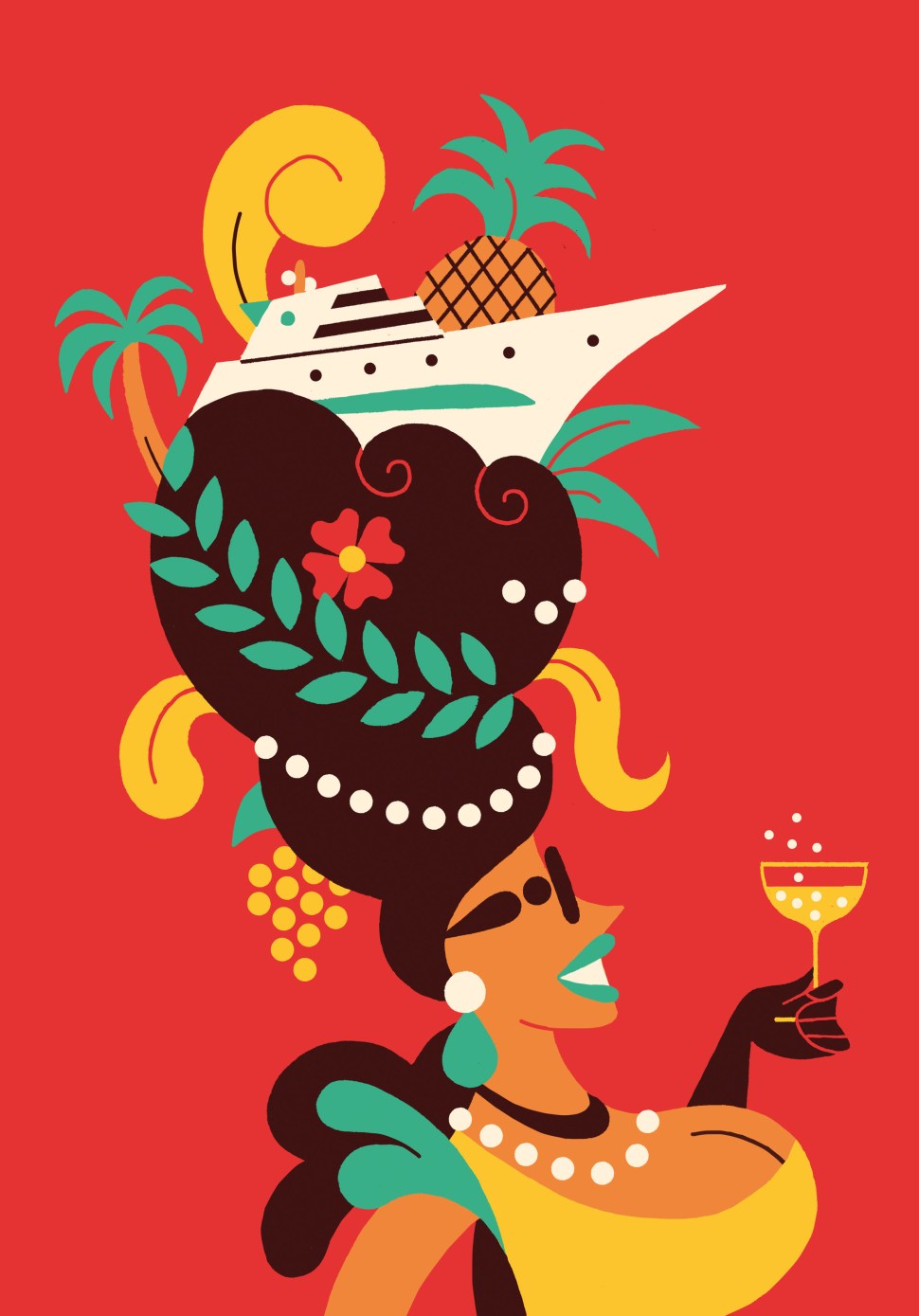 IT WAS A RAUCOUS EVENING AT MISS LILY’S, the downtown outpost of Jamaican cool. I happened to be out on the town with a quite famous and quite large sports star, who is also quite the dandy. We were kicking back in my favorite booth catching up over the cod fritters, ackee dip and plantain chips and toasting to his newborn with Red Stripe.

We hit a few hot spots, ending up at a club where we met up with his posse. As we settled into our table and bottle service, the waitress brought out Moët for the group and six champagne glasses. Owing to my experience before selling my first ad agency, I have quite a few champagne stories.

“Do you know that the Champagne coupe or saucer was modeled, legend has it, after the breast of Marie Antoinette or the courtesan Madame de Pompadour?” I asked, drawing upon my experience handling the advertising for Moët and Chandon and Dom Perignon for LVMH for many years.

“That’s just crazy,” a woman named Slam said, outlining her D-cups. “That’s not even an A cup.” She picked up and examined the glass with astonishment.

Dana and I always host Thanksgiving at our house at the beach, which, by Hamptons standards, is considered modest.

We used to have a prime ocean view from the balcony, but one day I saw the foundation of a huge beachfront structure being built across the way. It turned out to be one of the largest private residences in the entire country, with buildings totaling over 100,000 square feet. The compound immediately became controversial, sparking community debate and protests. The site and landscaping became so outsized my neighbors and I lost most of our view of the Atlantic, a fact not lost on a friend who came for a tour recently.

“And this is our bedroom,” I said.

“The view is so stunning,” he said, noting the light and air, and then the mega mansion in the distance. “But what’s that? Is that a Ritz Carlton?”

“Who is building that?” he asked. “You must be mad at them.”

“No. It happens to be our good friends Social Powerhouse and Real Estate Mogul,” I said. “Honestly, they’re such nice people and we’re such good friends we’re happy they’ll be our neighbors.”

“Well, I have a solution,” my friend, an architect, said surveying the ceiling and the terrace. “If you want to get your ocean view back all you need to do is build up.”

“Maybe,” I said, not sure I was ready for a McMansion.

“Don’t you think it’s time you made the house bigger anyway?” he asked.

Big Brother, the well-known ad man and TV personality, was hosting a party for his birthday at his architecturally significant townhouse. In the gallery area, milling guests were taking in the museum-quality collection of massive canvases. He had wisely stationed a buff bouncer in front of each one, knowing that an errant elbow or drink could be a very costly mistake.

As luck would have it, I ran into Social Powerhouse and Real Estate Mogul on the floating staircase under the luscious stare of the Iconic Blonde, one of Warhol’s finest.

“I just loved your last piece,” she laughed. “What’s your next one about?”

“The ‘bigger is better’ aesthetic,” I replied. “Any comments?”

“Always,” she said in her signature dry yet humorous tone. “Look around the room—big boobs, boots and baubles.”

She shrugged, her own 16-carat diamond glittering under the halogen lighting.

“Is that new?” I asked, catching a reflection of myself in the skating rink-sized emerald cut.

“Yes,” she said. “That’s the whole point. I started my career pouring coffee. When we first got engaged, I had a 3.5-carat ring. Well, no one ever saw a ring like that in my office. But as the jeweler said, diamonds have a way of shrinking over time.”

“We must have had the same jeweler,” I laughed. The ring I bought Dana looked huge when we got engaged, and now I think it looks like a baguette.

“And then,” she continued “for our 10th anniversary he said, ‘Your ring is awful,’ so I picked out a 5-carat princess cut with trillions, and when I wore it people fainted. For our 15th anniversary, he picked out a 10-carat round and, well, it was the biggest thing anyone ever saw.”

She could barely lift her hand. “We’ve worked hard for it. Built a family and business together. Today I see all the young girls [at an exclusive NYC private school] pull up, and they all have rings this size the moment they get engaged. They’re all married to guys that were born on third base who think they hit a triple.”

“WE ADVISE MANY OF OUR CLIENTS TO GO MORE natural,” the famed New York City dentist to the stars explained, “but not everyone listens.”

“How so?” I said, lying back in the chair as I got a good dose of gas.

“You understand that people should look and say, ‘he has really nice teeth,’ not that the teeth should be blinding white Chiclets and the first thing you see.”

“You have clients who want that?” I asked, starting to feel woozy.

“I have clients who tell me, ‘I want movie star teeth. Make them white, white, white and big, big, big.’ ”

“It’s like the big lip thing,” I said. “I just don’t get it. You talk to someone and you see these big lips and big white teeth coming at you. I feel like they should be playing the theme song for Jaws.”

He started prepping the drill. “I think there is this whole concept today about being red-carpet-ready. Everyone wants their 15 minutes. You have all these reality people who get a gig on TV and then want the Hollywood makeover. And to them bigger is better. Bigger laminations, bigger hair and of course, the huge boobs.”

“It’s a crazy look when you see really skinny girls with really big implants and really big teeth,” I added.

“Maybe that’s why they call themselves pumas or cougars. They’re all on the hunt,” he said, before the whirring of the drill began.

IT’S ALWAYS NICE TO HEAR AN OPPOSING POINT of view, and I was catching up with my old friend, Demoiselle, the French-born and ultra-fabulous stylist and purveyor of chic. She is one of the great intercontinental characters and has innate snobbishness as it relates to taste and beauty. She was consuming an assiette d’ huitres at Le Bernardin. I admire someone who can consume an oyster or handle an olive elegantly, and Demoiselle could teach a course.

“So you don’t think things have gotten bigger?” I asked.

“I didn’t say that,” she said. “I choose not to see it. My eye only goes to beauty. Those inflated lips as an example. Why look at them? They never look good. I cannot look at them. It’s too disturbing. In Paris, the women do small things to refresh, but one cannot tell. I also believe Americans are obsessed with the big idea of perfection but cannot get it right. I think beauty is about small imperfections.”

The bigger is better aesthetic, she declared, is “a bit tacky, no?”

She continued: “For me, how do you say, it suggests you have not grown up with money and once you get it you want to show that you have it.”

“I love jewelry, darling. You know that. I wear masses of jewelry.” She pointed to the assortment of eclectic and wonderful small pieces chosen from her travels.

“How about the idea of a big 16-carat cocktail ring?”

“If some good-looking man bought me a huge ring, I have to be honest … I wouldn’t turn it down.”

TWO WEEKS AGO I FLEW DOWN TO JAMAICA to shoot Chris Blackwell for the Wheels Up aviation ad campaign I was creative directing. Chris looked dashing in blue as the photographer snapped shots of him in front of the King Air 350i at Ian Fleming International Airport. (The resort is the former home of Fleming, and the location where he wrote all the James Bond novels.) We were having lunch at the chic new Bizot bar, catching up over jerk chicken and the sensational reggae playlist.

I sought his advice on my dilemma. “So my neighbor built one of the largest houses in America, which has blocked my ocean view, and everyone is advising me to build up.”

Chris looked at me coolly. “You’re in a perfect location, a block from the beach, and your home is marvelous and interesting. I wouldn’t touch it. Let everyone build huge homes. Yours is a gem.”

On the trip back to New York, I thought about Chris’ unique aesthetic and point of view. I decided to leave the house the way it is—it clearly won’t be the biggest house in the neighborhood, but it might be one of the more interesting ones.
With the money I would be saving by not doing the addition, I could buy a wonderful canvas I had my eye on at the Oh Wow Gallery in LA. Smaller homes dictate smaller walls, which dictate smaller canvases. Then I thought I might buy two.

There’s something to be said for a bigger collection. 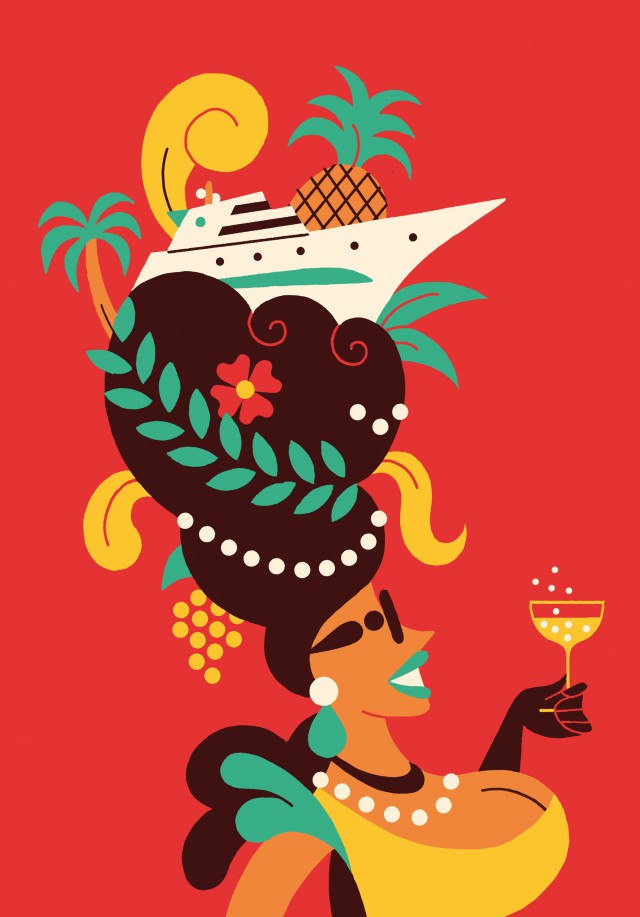