Doesn’t Luke have his own house to do this stuff in? What’s up with that ranch we’re always hearing about? Wouldn’t that be a better place for filming? And no kids would have to get pouty that their “real” stockings weren’t being used, because I bet you Colt and Luke’s other androgynously named child (Rain or something?) don’t even have stockings. The Wheeler kids make do with the decorations put up in whatever hotel Santa happens to find them slumbering. But that just doesn’t feel like Christmas to Maddie and Daphne. They miss their real Christmas stuff and I am totally feeling them. If there’s one time of year for saints and cynics alike to take sentimental baths in tradition, it’s Christmas. Nashville’s favorite cynic, Deacon, knows this as well as anybody and he’s seconding the girls. Deacon prefers Rayna’s real decorations and he doesn’t know how she’s living her life this way.

This episode was pretty much designed to hit Rayna over the head with her season arc. But let’s decide what that is, shall we? We can all agree that this fame-hungry, tabloid sensation is not who Rayna used to be. But who is she now? She’s the one who wanted the Rolling Stone interview. Luke didn’t want her to do it in the first place, so we can’t blame him for that one. She’s also the one who gave into campaigning for the CMAs. She subsequently got Luke kicked off Dancing with the Stars so she could perform solo. When Rayna starts complaining about being away from home on Christmas, Luke rightly reminds us that the honeymoon tour was Rayna’s idea! Also, as much as I would like to paint Luke as the Grinch here, this Christmas special is actually the first, in a series of invasive publicity stunts, that has been his choice. Compared to that Rolling Stone article, this Xmas special isn’t even that invasive. It’s for charity to boot. So, guys, I’m sorry but I think I have to call bullshit on Rayna’s pouting her way through this thing. Her behavior is the celebrity equivalent of forcing your partner to go to your family’s house every holiday, then sulking when it’s time to return the favor. Once in awhile, you’ve got to eat someone else’s stuffing. Even if said stuffing is delivered by room service, one should still be a good sport about it.

Rayna loves to tell herself that Luke is the one forcing her into this lifestyle. She wants so badly to believe she hasn’t changed. But the change in Rayna is clear from the choices she’s made all season. Say what you want about Luke, at least he knows who he is and what he wants. The question for Rayna this year isn’t, ‘how did I end up with this man who’s so unlike me?’ It’s “how did I become this person who’s so unlike me?”

Someone needs to get Rayna a mirror ASAP, so she can take a good, hard look at herself. But having said my piece, I’ll give it a rest. I don’t want to be too hard on Ray on Christmas. Let me say that my favorite moment of the night came after Daphne burned her little hands making Gingerbread men. With perfect cool mom timing, Rayna declared the hand would have to be amputated and asked Maddie for a knife. This little moment was so understated and wonderful that I got all Friday Night Lights tingly thinking about Tammy Taylor in Nashville.

Poor Zoe. Seriously, does this girl always get the shit end of the stick or what? She finally gets a break when Sadie’s fancy manager is interested in Zag*. Zoe sucks up having to perform with an ex**, only to have said ex sabotage her dreams, again, in favor of his supposed*** son, again, who still has those teeth! Then, then Scarlett**** takes Zoe’s place in Zag, like it’s not a huge betrayal to her supposed best friend. The band will probably become f’in famous now. I wouldn’t be surprised if when they do, Gunnar calls Zoe in LA and asks her to babysit Micah while he’s on the road. You suck, Gunnar. I am very sad to see Nashville’s only black character, who’s not homeless (Terry), and whose story isn’t solely to service that of a white character (Terry, again), written out of the show. Goodbye, Zoe. I hope you get your break in LA. I’ll be rooting for you.

*That’s their band’s name? Okay. Sure.

**Scarlett would have made it a whole thing.

***Seriously, a teen mom drops a kid on her rich ex’s doorstep and no one thinks a paternity test might be in order?

****And, of course, Scarlett can get over her PTSD (barf) if she’s sandwiched between her two ex-boyfriends. She just needs, like, all the attention. Also, Scarlett, nice nightgown and rain boots combo. It’s not raining and you’re not sleeping. Howev, it would have been much more appropriate if the character described as “hipster girl” had complimented this ridiculous ensemble over Layla’s mall beanie.

Layla (double barf) will have a hell of a lot more to write about now that she’s entered into, what will most certainly be, an emotionally abusive relationship with Jeff Fordham.

Juliet was so cute on that scooter, spying on Avery. And Avery thought it was cute too! And then he went to her house to tell her it was cute! Huzzah! The slow burn to reconciliation continues.

You know what I love about Juliet? She’s a crazy, selfish diva who never pretends that she’s not a crazy, selfish diva. When Juliet shows moments of kindness, empathy and love we can root for her because she’s trying to be better. She’s the most self-aware of any of our female leads. Scarlett and Rayna think that they’re saints, which can get really old. No one is a saint in Nashville, ladies, and Christmas is the perfect time to remember that mere mortals we are all.

Next week: Winter finale and Country’s Royal Wedding! See you there. 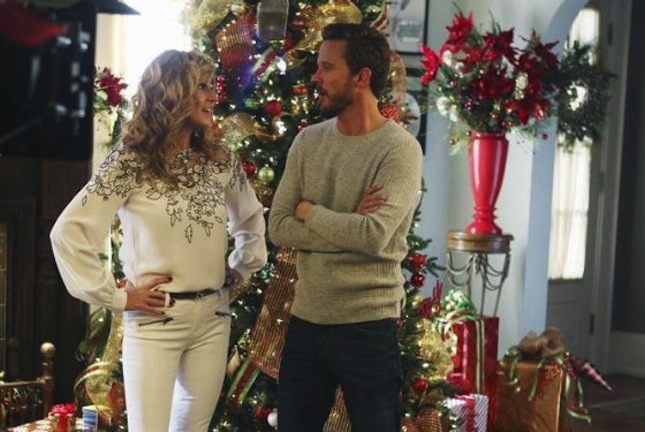