It is a scenario familiar to most habitual smokers in New York. Step outside, light up and wait, with no small amount of trepidation, for the swarm of cigarette scroungers to come circling in, attempting to cadge a smoke. They may be brandishing a dollar bill to pay you for your troubles, as though you are a human vending machine, or they may simply expect you to dish out a loosie for free.

Whatever the case may be, it seems you can’t light up anywhere in the city these days without one stranger or another bothering you for a cigarette.

“I think about this all the time,” said Choire Sicha, a co-founder of the Awl, who smokes about a pack of Winston Lights a day. “I have never, ever borrowed a cigarette from a stranger. And I give them out constantly. All the time. Like several times a week. My credit at the Bank of Smokestown is astronomical.”

Mr. Sicha sympathizes with those asking for cigarettes, though he finds himself in some uncomfortable situations from time to time. “I think I appreciate most the desperate young women who’ve clearly just had a bad date or gotten fired or been yelled at,” he said. “The totally distraught look, the usually messy hair, maybe a slightly bleary post-cry visage: I never regret giving one of them a cigarette.”

Whether there are more beggars than usual is impossible to quantify—homeless people don’t count—though it certainly seems so. In 2009, the Onion ran a faux-news item on the “single greatest threat to American smokers,” a man “suspected of bumming more than 75,000 cigarettes nationwide.” It rings true, when you rule out cancer and heart disease.

One gets the sense that these puff predators aren’t real smokers, per se, but mercenaries, swooping in to get their fix whenever they see fit. And it sounds miserly to say so, but this is no small thing, given the steep price of a pack of cigarettes, which, in the city, can cost around $15.

“I understand that we are a—literally—dying breed and that we need to bond together, but the stakes for sharing are way up,” David Carr, a media columnist and culture reporter for The New York Times who smokes 15 Camel Lights per day—“more when I have a lot of writing to do”—said in an email. “I rarely comply and the more aggressive the ask, the less likely I am to come through.”

Although smokers are an ostracized lot, New York smoking rates are, it turns out, on the rise. There are more than 1 million smokers in the city, according the New York Department of Health, up two points from 14 percent in 2010. So, you might think smokers would have an easier time avoiding these situations. But the fact is there are simply more smokers to bother.

“I love when they say, ‘Do you have an extra cigarette?’ ” said Tom McGeveran, co-founder and co-editor of Capital New York, who smokes between a half a pack and a pack of Marlboro Reds a day (“depending on nerves”). “There’s no such thing. Every cigarette is a cigarette you’re going to smoke if they don’t take it from you.”

Other smokers, however, take a more charitable view. “I don’t mind bestowing cigarettes on obviously like-minded and right-thinking persons no matter how clumsy or wheedling their approach,” Lewis Lapham, the editor of Lapham’s Quarterly who burns through three packs of Parliaments a day, said in an email message. “I feel their pain, know them as fellow citizens, don’t wish them further trouble with the inspectors of the nation’s souls.”

Audrey Silk is the founder of the New York advocacy group Citizens Lobbying Against Smoker Harassment. She grows her own tobacco and rolls her own cigarettes, which, she said, changes the financial calculus. “As a smokers’ rights advocate,” she said, “if somebody wants a cigarette—not that I encourage smoking—but there’s camaraderie there, and I am more than happy to give them one.”

As a smoker myself—like Mr. Carr, I’ll have about 15 Camel Lights a day—I go by a few different rules. Some days I’ll hand out a cigarette to the first person who asks me for one—and nobody else. Other days I might lie: Oh, I left my pack upstairs, or This is my last cigarette or I bummed this one from someone else. I always give cigarettes to the homeless if they ask. (It’s the good Samaritan in me.)

Most often, though, I like to view my pack as a bag of potato chips. Has a stranger on the street ever asked you for a spare chip? I’m guessing your answer is “no.” And while I might give a homeless man my bag of chips, there is no way I would part with a $15 pack of smokes.

Smokers don’t get much respect in New York. The city’s anti-smoking laws have forced them out of the bars, restaurants, offices and parks in which they were once welcome and onto the Hobbesian world of the streets. There, they are confronted not only by cigarette supplicants but sidelong scowls from health-conscious pedestrians.

But of all the miscreants in New York, are smokers really the worst of the lot? Times Square Elmos, reckless car honkers, oblivious smartphone addicts, strip club postcard guys and clueless tourists come to mind as possible contenders.

“The fact that I have to be outside to begin with is so enraging,” said Fran Lebowitz, New York’s resident kvetch and perhaps the city’s most prominent smoker, “that I don’t have much ire left if someone asks me for a cigarette.” 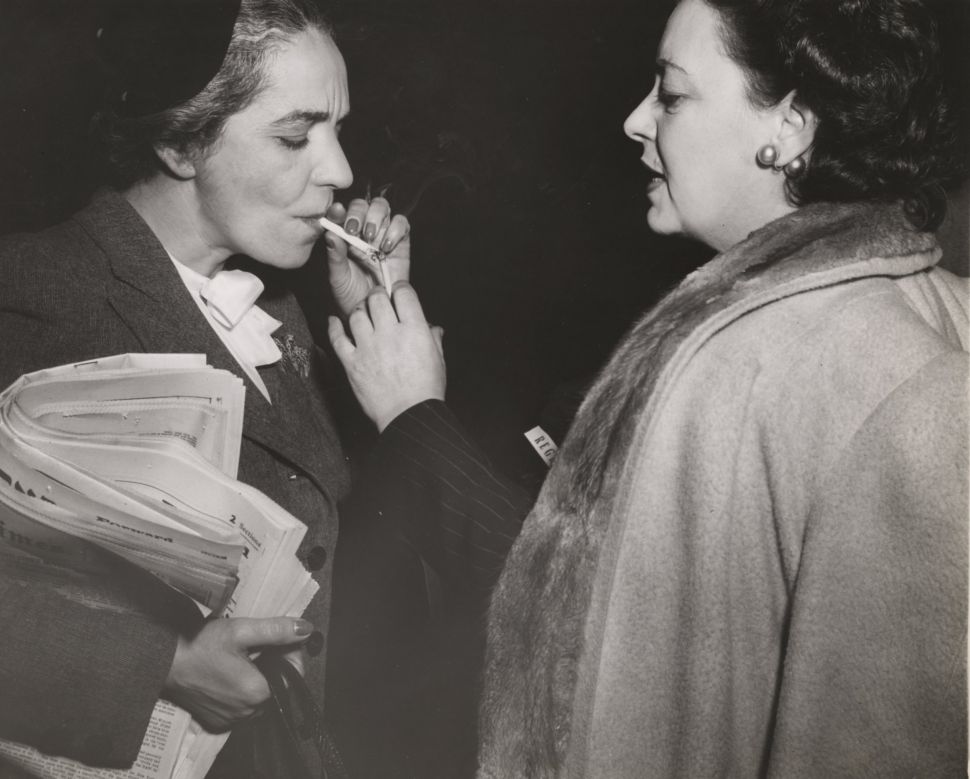