Alexandra Marzella is a young performance artist who has gone through 13 Instagram accounts. Each time she makes one, she posts selfies and images of her work, and the powers that be removed her. Her last account was @artxwerk6666 but that, too, was deleted just days ago.

Perhaps this keeps happening because her work isn’t exactly shy. And perhaps this is why a decent crowd skipped whatever blowout festivities were going around in Miami Friday night to hang by the bungalows at The Standard Spa, Miami Beach, where artist Petra Collins had installed the show that she curated, “Literally Bye”—what a name!—in a tiny poolside room, and invited Ms. Marzella to give a performance.

There was a lot going on at The Standard Spa. People played ping-pong in the lobby as men and women in a grand tapestry of varieties of sunglasses pressed out smokes and passed through doorways. There was another party just beyond the little cabanas, in the midst of a patch of palm trees—the woody section of The Standard’s sprawling lawns, with these little nooks, natural spots for private little dinner parties and maybe art fair trysts—where actress Rosario Dawson was standing in front of a screen displaying Rosario Dawson in slow motion. A great plume of incense fogged up around me, for some reason. Rosario Dawson was talking about the Rosario Dawson video installation and I decided to head back to the front, to check in on the Petra Collins show.

Ms. Collins is a talented photographer, a frequent muse to Ryan McGinley, and ubiquitous on the scene in the last year or so. The tiny pop-up gallery at The Standard that she curated was full of photos that are certainly suggestive but perhaps not revealing enough to, say, get someone booted off Instagram. Which is good, given that the centerpiece of the show is a neon installation depicting text in a dialogue box, or rather an iChat text bubble, that says “wish u weren’t here”—an installation that’s big-time pregnant with meaning and totally ironic and easily spotted as a surefire hit on Instagram. Petra got 7,171 likes for it.

But Ms. Marzella was perhaps the only person there without an no apparatus for posting pictures with an iPhone, and her performance was the big reveal. After an hour, she had yet to perform, and the crowd had become restless, curious, frustrated.

“How long does it take her to get ready?” one friend said as we smoked more time-killing cigarettes on a patio table. They were giving out prosecco and people seemed bored.

“Maybe, you know, she was ready to do it, and then, you know, got too scared.”

“What exactly is it she’s going to be doing?”

This became clear soon enough. After few minutes, the artist and Le Baron guru Andre Saraiva—who also happened to be hosting the launch of Discharge, the new book by Ms. Collins—hopped over to say the performance was about to start, we walked in to the tiny bungalow-turned-gallery with him and Andre Balazs, the hotelier who owns The Standard Spa and its sister locations in New York and Los Angeles and elsewhere. Soon, the room was totally packed, with overflow outside staring in between the blinds. Ms. Marzella was sitting on a bed in her underwear with big globs of blue eye shadow painted on her face. A few models crouched below her, iPhones out, filming her from different angles. A trap song began to play and Ms. Marzella bent her body in impressive angles, slapped and hit herself, and then eventually broke down crying in the packed bedroom full of intimate pictures. The heavy makeup streamed down her face and then she removed the underwear, the hip-hop still playing, and then a redhead actress and muse to Karl Lagerfeld dumped a bucket of on her head. The bed was soaking wet and she sat there for a while crying until the song ended.

As for all the video and pictures from the event, where could an onlooker post them? Well, it appears that Ms. Marzella has a new instagram account, @artits6666, but we will have to see how long it lasts. 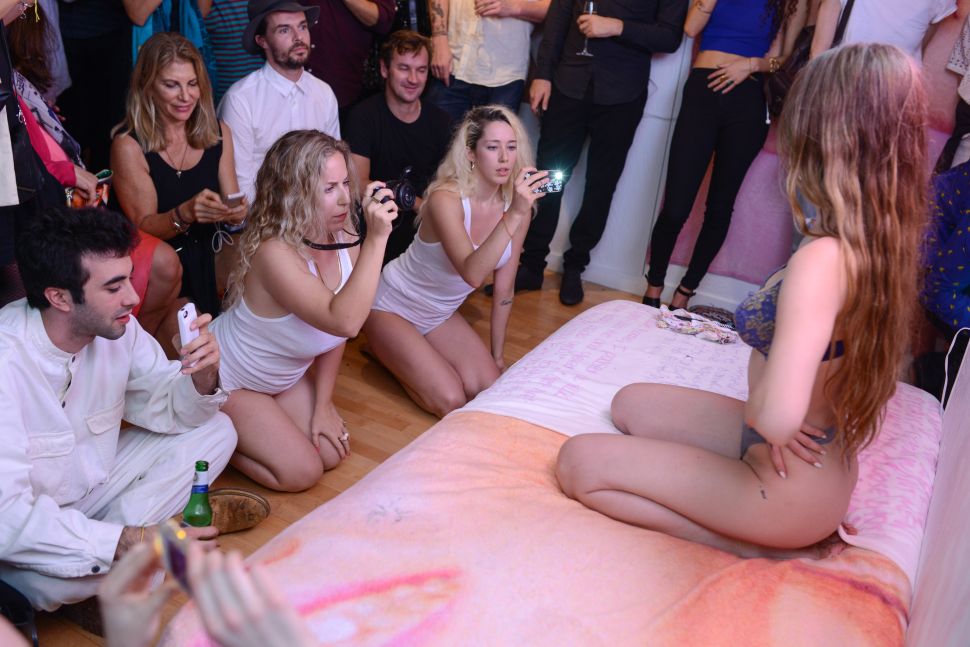