On his first visit to Rikers Island since the Koch era, Mayor Bill de Blasio today announced that the Department of Correction had officially ended the practice of putting adolescent inmates in solitary punitive segregation units, part of a reform agenda he’s rolled out for the city’s troubled jail system.

“It was not only our responsibility as leaders to fix these conditions and move forward, it’s our moral responsibility as humans not to create a situation where so many people had to experience so many difficult things—I mean everyone who was part of the reality here,” Mr. de Blasio said inside the chapel of the Robert N. Davoren Complex, alongside Commissioner Joseph Ponte and a cadre of uniformed officers.

The complex where Mr. de Blasio made his remarks was singled out by U.S. Attorney Preet Bhrara in a scathing report that found a “culture of violence” against inmates between the ages of 16 and 18. Inmates under 18 will no longer be subject to punitive segregation—solitary confinement that was previously doled out for up to 90 days per infraction committed by an inmate.

Mr. de Blasio had previously promised to end the practice for juveniles—which stops short of ending it all together, as some council members have called for—at a roundtable at City Hall last month. There were 91 juveniles in punitive segregation at the start of the year.

During a tour of the jail, Mr. de Blasio said he spoke to a 17-year-old who had served 110 days in punitive segregation.

“Imagine a 17-year-old experiencing that, and trying to grapple with that. But he was scheduled for 166 more days—well over half a year he was going to be in punitive segregation,” Mr. de Blasio said.

Instead, the inmate is now in the jail’s new “second-chance” housing, an option available to adolescents who turn their behavior around.

“He has not had any use of force incidents since being put in second-chance housing,” Mr. de Blasio said, adding that the young man seems to understand that he is being given an opportunity to change. “It’s fully registered for him—if he wants to turn his life around, this is the chance. And that means no violence.”

If a juvenile inmate commits an infraction but is not well-behaved enough for the second-chance housing, they’ll be put into a “Transitional Repair Unit.” That will allow officers to hold an inmate separate from his peers for a short period of time, under watch and not as punishment, until they calm down. The inmate will have access to individual support and therapy until they’re returned to their larger group.

Mr. de Blasio and Mr. Ponte have also called for new enhanced security units, where the department could place the most violent inmates in an effort to try to stem the stabbings and slashings that have plagued the jails. Those units would have a higher staff-to-inmate ratio and stricter rules.  Mr. Ponte has repeatedly said none of the rehabilitation or mental health programs they’ve proposed will work if the jails are not safe.

“We need to find who is driving the violence—and we’ve identified that group—and we need to manage them differently,” Mr. Ponte said.

Even as the mayor spoke of historically “dehumanizing” conditions for inmates, Mr. de Blasio took care to repeatedly praise correction officers—who go by the motto “New York’s Boldest”—noting the “very, very difficult work” they do.

Some have questioned whether rank-and-file officers—and the powerful Correction Officers Benevolent Association led by Norman Seabrook—will be on board with the changes planned for Rikers Island.

Mr. Ponte acknowledged there was some skepticism, at least at first, when asked by the Observer. He recalled outlining his plans for juvenile reforms to Assistant Chief James Perrino.

“When I gave him an outline of what we’re gonna do here in New York City, I think he thought I probably should have been in one of the mental health units,” Mr. Ponte cracked.

Mr. Ponte held his hand in one direction and said: “This is where we were.” He help up his other hand. “And this is where I’m asking people to go.”

But Mr. Ponte said he worked hard not to just impose systems that had worked elsewhere, like the juvenile jails he’d overseen in Maine. Instead, he took Mr. Perrino and others—including union representatives—on tours of those jails, to see what they could glean and how they could build their own program.

“We looked at a lot of different places with groups of staff, union members, command staff, line staff. They saw it work,” Mr. Ponte told the Observer. “So we didn’t have to force it on them. They were willing to say, ‘hey that really works.'” 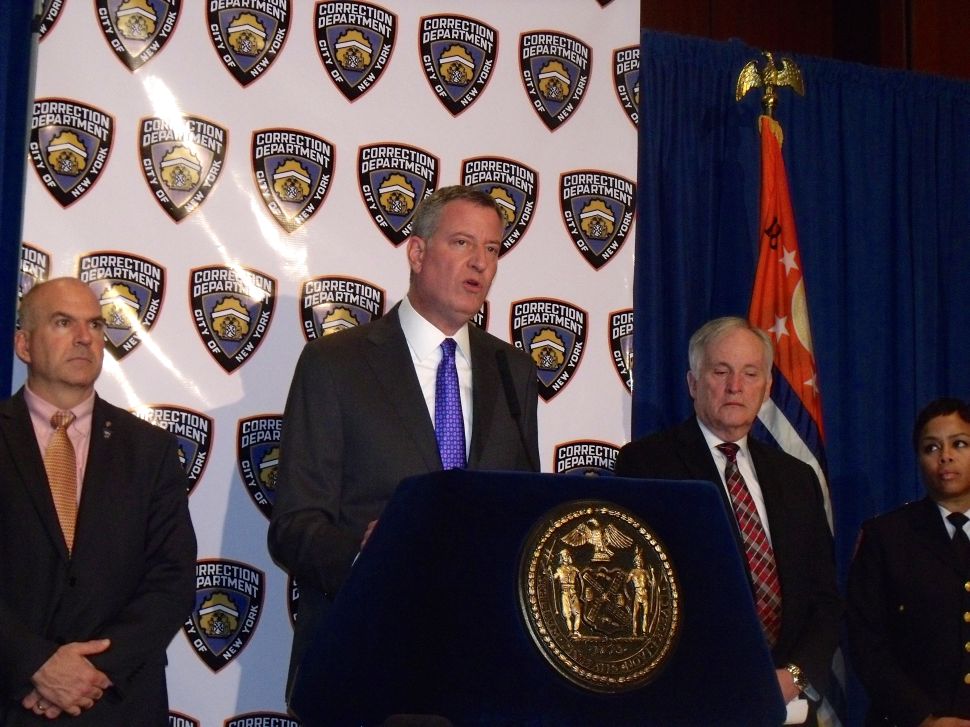