On the campaign trail a year ago, Bill de Blasio voiced his opposition to NYCHA’s land lease program. But now, NYCHA is taking an even more drastic step toward embracing privatization—selling a 50 percent stake in nearly 900 public housing apartments to two developers (L&M Development Partners and BFC Partner), who could convert those apartments to market rate in 30 years, according to The Wall Street Journal. In exchange, the developers will invest a total of $550 million in NYCHA housing, renovating apartments and earning revenue through federal subsidies that will pay developers the difference between the market rate rents for the apartments and the discounted rates tenants pay.

The plan, The Journal reports, has broad support among politicians and tenants, however, it is the first move toward privatization and unlike the land lease program, would involve not only turning over NYCHA land to private developers, but giving them an ownership stake in existing apartments. The deal stems from the six proposals submitted by developers at the end of Bloomberg’s term; NYCHA had claimed that the land lease program was dead, but refused to disclose details of the submitted proposals.

Yes, many buildings have amenities now, especially those on the outer fringes of desirable neighborhoods, as The New York Times reports. “The idea seems to be to create a mini-city with so many amenities that people feel like they never have to leave the building,” notes one broker. Though ideas for new amenities (like story ideas, apparently) seem to be running thin, and are also less lavish. Massage rooms, for instance, aren’t much of a perk unless you’re willing to pony up for a massage therapist and a handful of indoor pools are actually collaborations with nearby facilities rather than in-building bonuses.

Meanwhile, several city council members have introduced a bill that would mandate developers and management companies notify tenants at least two weeks in advance of when any amenities would be unavailable, according to Crain’s. Because we all know the pain of a surprise ping pong table or bowling alley closure when there hasn’t been sufficient time to make a contingency plan.

Alicia Glen hopes that de Blasio’s housing plan will be “even bigger and better and more successful than Mayor Koch’s plan,” according to Capital New York. It will have to be: Koch’s plan built some 180,000 units over 14 years; de Blasio’s is aiming for 200,000 over 10 years. And, as Capital points out, the city today is basically the polar opposite of when Koch took office, its viability challenged by too much money rather than too little.

For example, these days, the challenge is not only in keeping NYCHA housing affordable, but also Mitchell Lama developments like East Harlem’s Lakeview apartments, which wants to go market rate, according to The New York Daily News.

So the luxury market remains strong, but it’s not quite as strong as developers had believed. In To wit: a penthouse at the Brodsky Organization’s 135 East 79th Street listed for $26.5 million has sold for $4 million under ask at $22.5 million, according to The Times. And it’s even more hush-hush than usual. “The broker for the anonymous buyer, who used a limited liability company, Oddnumbers, also requested anonymity because of a confidentiality agreement.”

And The Real Deal thinks that 15 Renwick’s wacky steampunk marketing campaign might be proof that New York is over.

While many major league athletes buy glitzy pads in Miami, Vegas or New York, others prefer to build their primary homes in the small towns where they grew up. As The Journal reports, a mansion in the place where they grew up is a respite from the sometimes forced itinerancy of changing contracts. Though some, apparently, experience a bit of culture shock when returning to small towns without sushi or spas. There’s also the, unaddressed in the article, issue of resale. I.e. there probably won’t be many other buyers for 7,000-square-foot compounds in middle-of-nowhere locations.

WeWork is opening a Midtown coworking space at 205 E. 42nd Street, as Crain’s reports, though it will not, as the paper claims, be the company’s first Midtown location. WeWork has operated a space at 261 Madison Avenue for several years.

The Tenement Museum usually has a strict “no photos” policy because it takes away from the experience. But they relaxed that rule one night last week and Gothamist took a nice variety of shots.

Going back a little further to the 1600s, Atlantic Cities reports that Niewe Amsterdam was a “rowdy town” where “people were drunk all the time.” The city ordinance from the time, “prohibited ‘the firing of guns… [and] the planting of Maypoles’ on New Year’s Day and Mayday, when drunken revelry often led to ‘insolent practices with sad accidents of bodily injury.’ ” 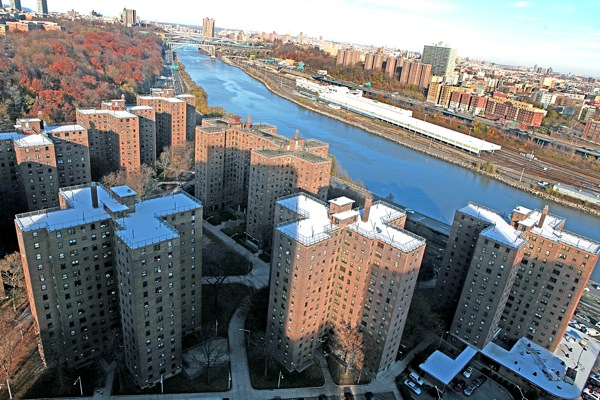