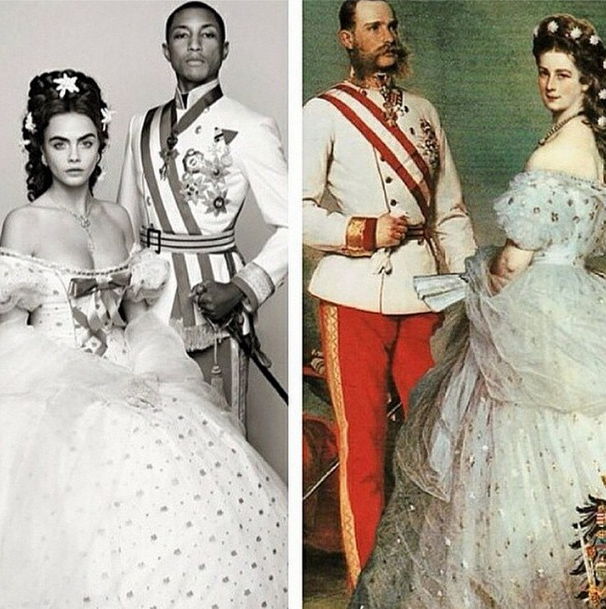 Cara and Pharrell alongside Emperor Franz Joseph I and Empress Elisabeth. (Photo via instagram.com/caradelevingne)

Kate Moss and Jamie Hince, Jerry Hall and Mick Jagger, Chrissy Teigen and John Legend, Heidi Klum and Seal: it’s no secret that models and musicians have, historically, had quite an affinity for each other.

Usually, though, these unions are solely romantic (and image-boosting—the PR doesn’t hurt). With the premier of Chanel’s new promotional film, Reincarnation, Cara Delevingne and Pharrell have shown that a musician-model pairing can also be put to professional use.

In the video, which debuted in Salzburg tonight at Chanel’s Métiers d’Arts show, Mr. Williams and Ms. Delevingne are a bellhop and a waitress, respectively. They transform into royalty overnight, strongly resembling Austria’s Emperor Franz Joseph I and Empress Elisabeth of Austria, as seen in the above mashup Ms. Delevingne uploaded to Instagram.

Director Karl Lagerfeld did not pick these particular royals by accident. Empress Elisabeth was an eccentric beauty known for her miniscule waist and floor-length hair. She also had a proclivity for leather facial masks stuffed with veal and was obsessed with her appearance, bringing to mind, as noted by Daisy Goodwin in her novel The Fortune Hunter, a predecessor to Kim Kardashian. The reality star’s love of “waist training” and bloody beauty treatments make her a neat modern-day analog to the empress.

The real treat nestled inside this video is the debut of Mr. Williams and Ms. Delevingne’s long-awaited song, “CC The World.” Throughout the song, Ms. Delevingne can be heard chirping, “C! C!” as an homage to the Chanel logo and a wink to our increasingly digital culture; with this highly share-able online video, you could say Mr. Lagerfeld is “cc-ing the world” on the debut of Pharrell and Cara’s song. Also, Empress Elisabeth, whom Ms. Delevingne is dressed to resemble, was known as Sisi.

Mr. Williams sings most of the song, while Ms. Delevingne lends her voice for a full verse later on. Finally, Géraldine Chaplin appears, reprising her role as Coco Chanel, whom she portrayed in Mr. Lagerfeld’s 2013 Métiers d’Arts video, as well.

Check the video, with our new favorite model-musician union, even if it is just professional, below: 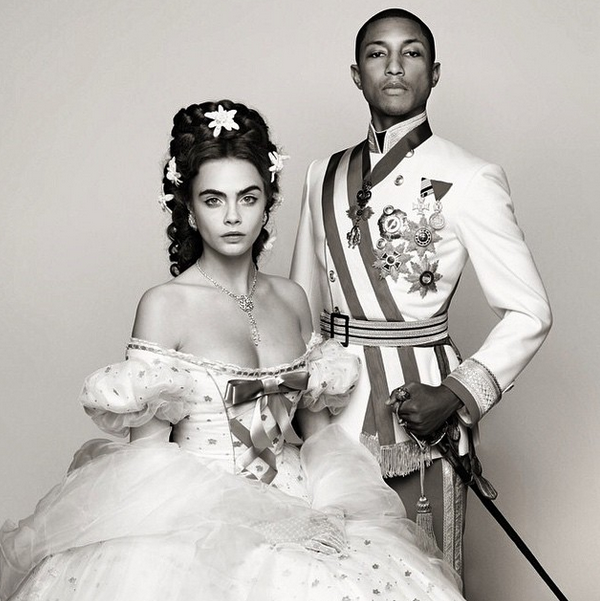